Guarded optimism: Melo vs. Mason could be focal point Thursday

Kansas Jayhawks guard Devonte' Graham and his teammates laugh as forward Cheick Diallo tries to yank him out of line while the team shoots half court shots for dun during practice on Wednesday, March 23, 2016 at KFC Yum! Center in Louisville, Kentucky.

Louisville, Ky. — There was a lot of talk about point guards, past and present, in KFC Yum! Center on Wednesday, eve of today’s NCAA South Regional matchup between No. 1 seed Kansas University and No. 5 Maryland.

“Am I scoring right there? Take that, ‘Turg,’” KU coach Bill Self exclaimed with a smile, looking at an iPad video of his converting for Oklahoma State against KU in the 1980s against current Maryland coach Mark Turgeon’s Jayhawk team.

“That was a beautiful move, too,” former Cowboy lead guard Self added of his taking it to the hole against former KU point Turgeon. “I wonder how long they had to edit tape to find that.” 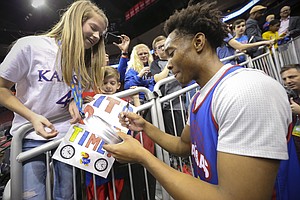 A lot longer than it would take somebody to find footage of the point guards who will take the court for KU (32-4) and Maryland (27-8) approximately 8:40 p.m. today.

Trimble is still a bit more well known nationally, having been ranked No. 39 in the Class of 2014 by Rivals.com, compared to late-bloomer Mason’s No. 76 rating.

And KU’s current scouting report confirms Trimble is a handful to control.

“He’s a good guard. He’s quick, good with the ball, good off ball screens,” Mason said. “He’s a good overall player. It’s fun to guard good players, just to compete. It’s an all-around fun game. I can’t wait to get out there.”

Mason confirmed it’d be a difficult assignment, but one he looks forward to.

“They have a lot of different actions, but it definitely will be me to start out,” he said of being assigned to guard Trimble. “It could be anyone from there because of the different things they do. It depends what they will be running. I think most of the game I definitely will have him.”

Self said Mason vs. Melo is a dandy confrontation between elite college lead guards.

Mason downplayed some nagging injuries: “My (bruised left) foot only bothers me when I sit around or get still. If I’m laying around, it’s sore to walk on. When I get treatment and tape, I’m good on the court.”

He said this obviously is more than a Mason-Melo matchup.

“He was my guy back in prep school,” Mason said, smiling. “We text a few times. We Facetime a few times. He called me a couple days ago. We didn’t talk too much, but I had a chance to talk to him. It’s a good feeling to get a chance to play against my old prep school teammate in the Sweet 16.”

Mason recalled the two having to rise out of bed at 5:50 every day for marching and drills.

“It wasn’t terrible. It made me a better person,” Mason said. “Back then I used to complain about it a little bit.”

Seems they didn’t even need to use the buddy system to make sure they were up and at it and never late.

“Most of the time we had a bell that rung every morning. That pretty much did it,” Mason said.

Kansas’ Wayne Selden Jr. played AAU ball with some of the Terps, including Layman, who averages 11.7 ppg and 5.3 rpg and Jaylen Brantley (2.4 ppg off bench).

“They are a very good team. We want to play the best,” Selden said. “It’s going to be a good game. It will come down to who wants it more. I think this is the most focused I’ve been in my career,” the junior added. “When you want it so bad, you are willing to focus. No outside distractions. I’m locked in. I think we all are. I feel we have a special group. We don’t want to leave this saying, ‘What if?’”

Meanwhile, focusing back on the coach/point guard discussion, Self, who helped coach Turgeon when Self was a member of Larry Brown’s staff during the 1985-86 Final Four season, said, “Turg was a good player. He wasn’t very big, but he got all the talent out of that 5-10, 160-pound frame he possible could.

“His teams are sound. He’s very clever in how they use their personnel. He’s a terrific coach, an elite coach and has Maryland playing extremely well. This is a hard matchup because we really think a lot of their team.”