Kansas guard Brandon Rush defends against Texas forward Kevin Durant in overtime of Sunday's championship game of the Big XII Tournament against the Longhorns at the Ford Center in Oklahoma City.

So many terrific Big 12 players never experienced celebrating a regular-season conference title because Kansas University’s program, a model of consistent excellence, prevented them from winning the hardware.

A look at a dozen of the best players denied a Big 12 title because of Kansas’ 12-year run that includes eight outright titles and four shared ones:

11 Marcus Denmon (Missouri): The quick, aggressive guard from Kansas City scored from the perimeter and on relentless drives to the hoop. Earned All-Big 12 first-team recognition in his final two seasons for the Tigers.

10 Georges Niang (Iowa State): A menu might not fit under his feet on his jump-shot, but he sure has a knack for scoring from anywhere on the floor. Also a skilled ball-handler and passer and a tough rebounder who knows how to gain position. 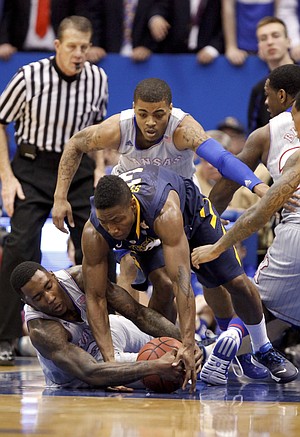 So many terrific Big 12 players never experienced celebrating a regular-season conference title because Kansas University’s program, a model of consistent excellence, prevented them from winning the hardware. Journal-World sports editor Tom Keegan looks back at a dozen of the best players denied a Big 12 title because of Kansas’ 12-year run that includes eight outright titles and four shared ones.

9 Melvin Ejim (Iowa State): A four-year starter for the Cyclones, Ejim earned Big 12 Player of the Year honors as a senior.

8 James Anderson (Oklahoma State): Big 12 Player of the Year and second-team All-American in 2010, he had such deep range and such a quick release that he could shoot the Cowboys into games that weren’t necessarily going so great otherwise.

6 Acie Law (Texas A&M): A 2007 first-team All-American, Law hit huge shot after huge shot for the Aggies. He hit a buzzer-beating three to defeat top rival Texas and hit a three late over the outstretched arms of Brandon Rush in Allen Fieldhouse for the upset.

5 Marcus Smart (Oklahoma State): Amazing, spontaneous back flip he executed on the court after Cowboys defeated KU in Allen Fieldhouse. It was the signature moment of his outstanding freshman season. He tailed off a bit as a sophomore and never had a consistent jumper, but he was a lot to handle and a very skilled flopper. Second-team All-American as a freshman.

4 Buddy Hield (Oklahoma): Two-time reigning Big 12 Player of the Year won’t soon be forgotten by Kansas fans, who gave him ovation after he scored 46 points in a 109-106, triple-overtime loss.

3 Blake Griffin (Oklahoma): Played just five minutes against Kansas in his two-season career for the Sooners. Injured knee five minutes into only Allen Fieldhouse appearance and was not cleared to play against KU in Norman because he was suffering from a concussion.

2 Michael Beasley (Kansas State): Cheated out of national player of the year honors that went to North Carolina’s Tyler Hansbrough, Beasley averaged 33.3 points and 15.7 rebounds in his lone season in Manhattan. He scored 25 points in K-State’s 84-75 victory vs. Kansas in Bramlage and did his best to complete the sweep in Lawrence, but didn’t have enough help. Beasley scored 29 points, made four of seven threes and had 11 rebounds in Allen Fieldhouse, but it wasn’t enough to prevent an 88-74 loss.

1 Kevin Durant (Texas): Received standing ovation from Allen Fieldhouse crowd when he re-entered the game after suffering a sprained ankle. It was a nod to his 25-point first-half explosion. Finished with 32 points, nine rebounds and two blocked shots on a day he made six of eight threes. That wasn’t production enough for a victory. His 37 points, 10 rebounds and six blocked shots in 43 minutes weren’t enough for the Longhorns to prevail in the Big 12 tournament, either. Durant soaked in the experience of playing in the fieldhouse and the crowd enjoyed every minute of watching one of the world’s top three basketball players.

The stats listed in this article on Beasley were his per 40 minute stats. His real stats were 26.2 points per game and 12.4 rebounds per game. Hansbrough averaged 22.6 points per game and 10.2 rebounds per game but also played a much tougher schedule than Beasley did, although I still think Beasley should have won the POY award. But both those guys would have traded in the POY award for what KU got that year: The National Championship!

You do know that your #5 Marcus Smart played for Oklahoma State not Oklahoma, don't you?

"There is so much parity in Big 12 basketball. Every team has an equal opportunity to take second place." -Jay Bilas

Beasley just won the Chinese MVP award. I would move him back to #7 if they are listing these players on future accomplishments. 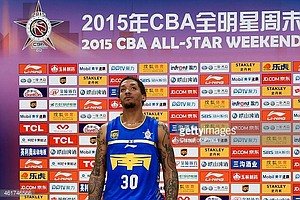 Brilliant article. Every recruit should read this. They were denied a title because they committed to the WRONG school!