Fort Worth, Texas — Kansas University women’s basketball held the lead for much of the first three quarters before falling behind in the fourth, then nearly erasing a seven-point deficit to TCU with 40 seconds to play.

The Horned Frogs ultimately held off the Jayhawks to claim a 55-52 win on Monday night inside Schollmaier Arena.

Six straight points, capped by a three-point play from sophomore guard Lauren Aldridge brought the Jayhawks (5-24, 0-18 Big 12) to within a point with 25 seconds left. 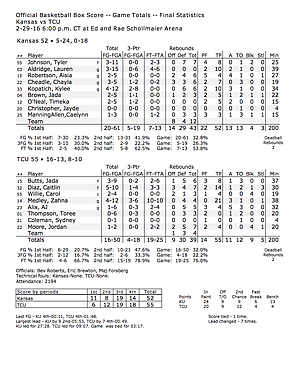 After a pair of made free throws from TCU senior Zahna Medley, Aldridge earned yet another and-one opportunity, this time to bring the score level. Aldridge missed the free throw, and sophomore Chayla Cheadle missed pair of free throws, and TCU escaped with the victory in the regular-season finale.

"I thought we fought really hard, but we still didn't make any shots," KU coach Brandon Schneider said. "We had a lot of good looks close to the basket where we couldn't convert; anywhere from six inches to four feet, we couldn't convert. We missed three free throws to tie the game. But thinking about Jada Brown's offensive rebound and Chayla Cheadle's offensive rebound off of the free throw. You don't make those plays if you quit. They embarrassed us at our place, and I was disappointed in how we represented ourselves, but tonight was the exact opposite. We fought tooth and nail and, I thought, guarded the heck out of them. We just couldn't make enough shots or enough free throws to get over the hump."

Aldridge and freshman guard Kylee Kopatich led the Jayhawks with 10 points each.

Both teams struggled to find a find a rhythm in the early going. Kansas grabbed a 6-2 lead with a three-pointer from junior forward Jada Brown at the 4:20 mark. TCU went nearly eight minutes between made field goals, and two free throws from Medley kept the Horned Frogs from being shut out during the same span.

TCU’s six first-quarter points marked its lowest output in the opening frame this season and the Jayhawks’ best defensive effort in the first 10 minutes, as well.

The Jayhawks and Horned Frogs now head to Oklahoma City, Okla., for the 2016 Big 12 Championship, beginning Friday. Kansas will be the 10th seed, while TCU will be seeded seventh.

Wow this women's program has become an embarrassment. If the men's program wasn't so good I think more people would be talking about this. Never thought I would see this program drop to this low. Marion built a program that fought hard night in and night out, Bonnie ball never did reach new heights and now it appears to be as low as football dropped. We have to want our school to be competitive at more than just men's basketball.

Marian wasn't that great. Only 3 sweet sixteen appearances in 31 years of coaching KU. Bonnie got KU to the sweet sixteen twice in her 11 years as coach. I think hiring Brandon Schneider was a gamble. He had great success at Emporia State but that is at a much lower level of competition than the Big 12. He had moderate success at Stephen F. Austin State but once again not near the competition of the Big 12. It's too early to tell if he will eventually be a good hire. He will need to work with his own recruits and implement his schemes. So lets give him a couple years to see what they can do. They obviously have a long way to go to be relevant.