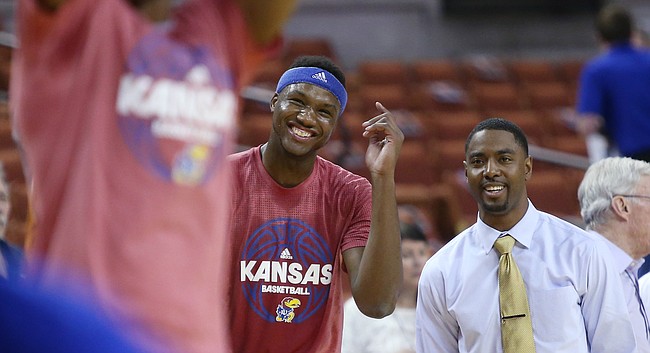 Didn't know that Miles was a top-ten all-time NCAA assists guy - that is an impressive stat. Nice to read over his career, really an impressive resume. Maybe this will be our next coach when Self retires?

Good start to the discussion Brett.

Given that Miles was not actually an official assistant last season, a lot would seem to depend on how long Coach Self continues to coach for KU. If Aaron's coaching career begins well, and has time to develop, he would join the ranks of viable candidates. The others would seem to include Dooley himself, Tad Boyle, Jacque Vaughn, Jerod Haase, Mark Turgeon among those with Kansas connections as well as every other coach in basketball save a couple. Miles has a ways to go before becoming a serious candidate, but hopefully coaching is his thing and he can work his way up.

If reworking a comment to save Brett's fragile self esteem were an Olympic sport you'd be headed to Rio. Let's hope your changes were sufficient to avoid one of his deranged tirades...

You may have something there, Brett. Aaron will distinguish himself at FGCU, and he will continue to advance from there. He definitely should be in the mix when that day comes to replace Bill Self, hopefully a long time from now.

Given that Miles was not actually an official assistant last season, it might be a touch premature to anoint him as a Bill Self successor before his coaching career even begins....

Dooley himself, Tad Boyle, Jacque Vaughn, Jerod Haase, Mark Turgeon among those with Kansas connections as well as every other coach in basketball save a couple are miles ahead of Miles. Hopefully coaching is his thing and he can work his way up.

Didn't read where anyone anointed Miles as Self's heir. Where did you see that?

Brett, you poor thing. Its easy to see where your own ideas appear ridiculous even to you. Either don't say ridiculous things, stand by them or just say nothing. Trying to insult someone for exploring an idea that you've put forth is an astounding level of idiocy, even for you.

It's not amusing or challenging to have to swat away an intellectual gnat like yourself as it continues to try to bite away in vain... Please. Stop humiliating yourself like this.

I hate to see you leave Campanile Hill so soon. But, I know this is another step towards the next chapter in your professional career. Congratulations to you Aaron. Rock Chalk!

Unless Coach Self decides to retire early or goes to the pros, I don't think that either Danny Manning or Mark Turgeon would likely be a successor, since they are contemporaries of Bill's. The same probably goes for Tad Boyle and perhaps even Joe Dooley. However, the younger names of Jacque or Jerod could be viable. Of course, I hope that this decision doesn't have to come for a long time. Undoubtedly, other names would pop up as well between now and then.

Whenever it happens, I don't think that KU will have to suffer from a lack of candidates throughout college basketball. Although it will be a tough act to follow, I'm sure that a lot of people would relish the opportunity to coach for KU in Allen Field House

Haase is on an interesting trajectory. It's not unrealistic to project him as a candidate for top jobs down the road. Gotta keep winning on a bigger stage.