Kansas sophomore Lauren Aldridge (3) is harassed by Texas Tech's Rayven Brooks (11) as she tries to get off a shot during their game Saturday evening at Allen Fieldhouse.

What seemed like as good a shot as any for Kansas University’s women’s basketball team to capture its first conference win of 2016 and end an ugly losing streak came and went Saturday night at Allen Fieldhouse with the Jayhawks experiencing the same result they have in every game since early December.

Facing another struggling Big 12 program, KU failed to capitalize on a good start in its home finale and instead remained winless in conference, with a 69-58 loss to Texas Tech.

First-year Kansas coach Brandon Schneider, whose team hasn’t experienced a win since Dec. 13, couldn’t blame a lack of execution for the latest setback. 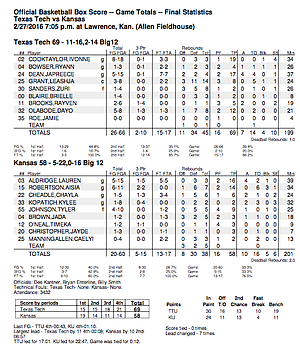 One of KU’s freshman guards, Aisia Robertson (14 points, 6-for-11 shooting), did her best to keep her team competitive. Robertson scored two baskets in the first three minutes of the fourth quarter, cutting Tech’s lead to two, but the Jayhawks (5-23 overall, 0-17 Big 12) couldn’t get timely stops or baskets in crunch time.

Sophomore Kansas guard Lauren Aldridge (16 points) hit her first three-pointer of the game with 3:39 to play, and the Red Raiders led only 57-56. However, Kansas connected on just one of its final seven shots, and an offensive rebound and put-back by Leashja Grant (eight points, 14 boards) gave Texas Tech a much-needed two-possession cushion with 1:24 remaining. 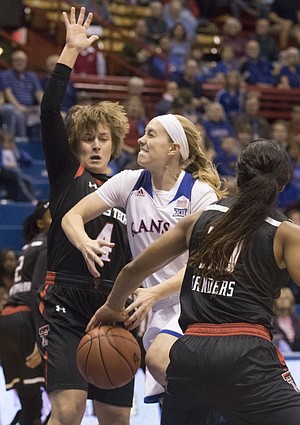 A disastrous third-quarter stretch for Kansas allowed the Red Raiders to snag momentum in the battle between the Big 12’s ninth- and 10th-place teams. Tech took its first lead of the game, 36-35, on an Ivonne CookTaylor jumper less than three minutes into the second half.

“We definitely didn’t want to give them their first (Big 12) win, though,” CookTaylor said, after scoring a game-high 19 points.

The Kansas offense sputtered amid Tech’s third-quarter response, with five turnovers and nine straight missed field-goal attempts, before Robertson beat the third-quarter buzzer with a three-pointer from the left corner.

KU’s only other points during the final seven minutes of the third came via two free throws apiece from sophomores Chayla Cheadle and Aldridge, allowing Texas Tech to take a 48-44 lead into the fourth.

The Jayhawks, who actually got off to a hot start and led 19-15 after a quarter, couldn’t keep it up the entire first half. Aldridge drove to the paint for an emphatic and-one and a successful three-point play for a 10-point KU lead with 6:59 left in the second quarter.

And although Kansas led at the half for just the eighth time this season, making just five of 15 shot attempts in the second quarter meant Texas Tech made up plenty of ground, cutting KU’s lead to 33-30 at the break.

“Obviously it’s disappointing,” Aldridge said following KU’s home finale. “Losing’s never fun. But, you know, we’ve got prep (today) and two games left, so we’ve gotta come in and, no matter what’s happened the entire season prior to, we’ve gotta come in with a lot of energy and get ready for TCU (on the road) on Monday.”