Stillwater, Okla. — Kansas University hit just 25 percent of its first-half field-goal attempts and never recovered from that cold-shooting start in a 71-49 Big 12 women’s basketball loss to No. 22 Oklahoma State on Wednesday. 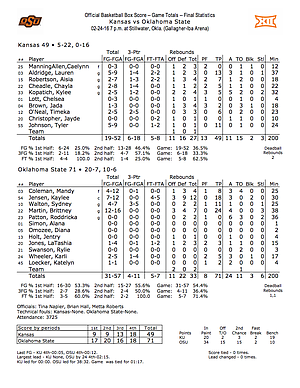 “Well, she’s so efficient,” KU coach Brandon Schneider said of Martin. “I don’t think there is any question in my mind that she should be MVP of this league. You look at everything she brings to this team: points, rebounds, steals, offensive rebounds. She’s really an impact player.”

“First half, I thought our shot selection was really poor,” Schneider said. “Defensively, we missed assignments on things that we specifically worked on a great deal in preparation for this game. Second half, I thought our shot selection was a lot better. We lost the second half by three points, and that’s giving up, I think, six points on out-of-bounds plays. The second half was much better, so there were some positives we could draw from that,

Lauren Aldridge had 13 points and Tyler Johnson scored 11 for the Jayhawks, who have lost 18 straight.

KU will play its home finale against Texas Tech on Saturday. Tipoff is 7 p.m. at Allen Fieldhouse.

First the FB team, now the WBB team... Hopefully we don't end up with two teams with zero conference wins in a season!

Ok the Football and WBB team may be struggling ok, but just remember The Ladies Track team won a National Championship.The Softball,Baseball, Track and of courde the Mens BB is still ok.

Also remember Dr Zenger got Rock Chalk Park, the Soccer fields, and The Softball fields upgraded.In addition to what has been done to AFH.Plus there will be upgrades to the Football and other athletic venues.Those upgrades would not had happened under the previous regimes.

Things will get better hang in there!

How is this possible, we should be able to recruit to kansas best facilities in america....just a damm shame.

This is worse than football. We have no seniors on this team, so it's going to be a nasty off-season. Is this coach going to stand pat, and pray or are some people going to lose their schols. I think they all know what's coming down.

Bonnie really did a great job recruiting. This last class was actually ranked, only problem, no big people, no scorers. Scorers we will have next year, but who is going to rebound and play interior defense. So far Manning-Allen is just not getting it done. Of course with the way the others play defense, she has an impossible task.

So, as I say, this is a scarier situation than the football team. Most likely some people will go, because this status quo cannot be allowed to continue.

Coach Schneider came into a real mess. I wonder if he saw it coming, before he took the job.