Kansas guard Sviatoslav Mykhailiuk (10) puts up a three before Kansas State forward Wesley Iwundu (25) during the first half, Saturday, Feb. 20, 2016 at Bramlage Coliseum in Manhattan, Kan.

Mykhailiuk shot 3-for-4 from three-point range, with four rebounds, two assists and a steal in 20 minutes.

“He likes K-State because those have been his best two games probably in league play,” KU coach Bill Self said. 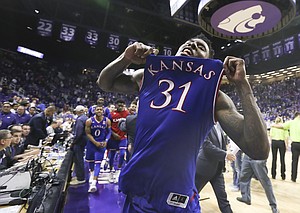 “Those three threes he made were big. He was the best player in the game in the first half (two threes). They went zone two possessions. Him making the three right off the bat got ’em out of the zone,” Self added.

Big 12 lead: KU is two games up on West Virginia, Oklahoma and Baylor in the league race, with four games to play.

“We’re in good shape, but we need to go play great Tuesday (7 p.m., at Baylor). If you win Tuesday, you put yourself in terrific position,” Self said. “I’m proud of our guys. We don’t need to relax at all.”

Fans boo Greene: KU junior Brannen Greene, who drew KSU’s ire by dunking at the end of regulation in KU’s 19-point win over KSU in Lawrence, was the first Jayhawk out of the tunnel onto the court for warmups before the game.

Drawing boos, Greene immediately accepted a pass from a manager and went in and dunked. Greene did not score in five minutes during the game.

Purple posters: Some signs visible in the crowd: “Joe Buck > Bob Davis,” “Beware of the Storm,” “My grandpa posterized Perry Ellis when he was in grade school.” 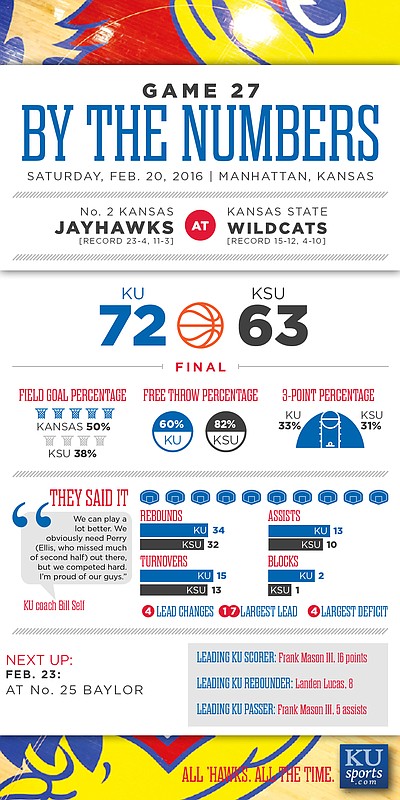