The man who brought more four-star football recruits to Lawrence during the past six years than any other coach is leaving Kansas.

A source close to the Kansas football program on Friday morning confirmed that running backs coach and recruiting coordinator Reggie Mitchell is leaving KU for a similar position on Bret Bielema’s staff at Arkansas.

Reached by phone Friday night by the Journal-World, Mitchell said the decision to leave KU was difficult but that a new challenge in the SEC at a "special place" was too good to pass up.

"I spent 16 years of my life here," said Mitchell, who is expected to start his new job next week. "And I always said I'd never leave unless it was a great opportunity. So it was tough, but I'm very excited and honored about the chance to join the Razorback family and to work for Coach B."

The move, which no doubt comes with a raise and offers Mitchell a better opportunity to rack up victories in the immediate future, marks the second member of KU coach David Beaty’s staff to leave Lawrence after one year under Beaty and represents the third full-time assistant to be removed from Beaty’s cabinet. Gary Hyman, who spent 2015 as KU’s special teams coordinator, was reassigned in the offseason but is still with the program. Kevin Kane gave up his post as KU’s linebackers coach to take over as the defensive coordinator at Northern Illinois. 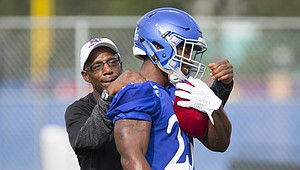 Kansas running back coach Reggie Mitchell has some fun with De'Andre Mann as the running backs work together during the first day of practice on Thursday, Aug. 6, 2015 at the fields south of Anschutz Pavilion.

Mitchell, 55, worked under four head coaches at KU — five if you count 2014 interim coach Clint Bowen — and developed a reputation, both at Kansas and previous stops at Michigan State and Illinois, as one of the top recruiters in the nation.

According to a Friday morning report from SI.com, Mitchell will fill an opening left by former Arkansas special teams coordinator and running backs coach Jemal Singleton, who left last week to become the running backs coach for the NFL’s Indianapolis Colts.

Brandon Bourbon, a former four-star prospect whom Mitchell inspired to pick Kansas over Stanford back in 2010, said he was surprised to learn about Mitchell’s departure and sad that KU was losing someone so familiar with the program.

“He’s been the one constant all these years,” Bourbon told the Journal-World. “He’s a great recruiter and it’s crazy to think he won’t be with the program any more.”

Beyond his ability to entice Bourbon and others to join the Jayhawks, Bourbon said he always admired the way Mitchell pushed KU’s running backs.

“I like that he brought in all the aspects, running, blocking, pass catching and really tried to make us complete backs,” Bourbon said. “Plus, he was really good at emphasizing the discipline aspect and demanded that we were sharp in everything we did.”

With 33 years as college assistant, Mitchell was by far the most experienced coach on Beaty’s staff. According to a source in the athletic department, KU made significant efforts to keep Mitchell, who was in Arkansas on Wednesday.

The same source said KU already had received several inquiries about KU’s new job opening and added that attaching the title of recruiting coordinator was not a requirement.

Despite Mitchell’s years of service and quality recruiting, multiple sources in the football program used the same language on Friday when asked about Mitchell’s departure.

“(We) wish him the best, but the train keeps moving,” they said.

Wow, this is a huge blow to KU!

OUCH, this really hurts. Give him a pile of money to stay.

Sounds like they tried that. I think the AC's are already fairly well paid for AC's.

I hate to lose Mitchell but every coach's departure is also an opportunity to improve the KU program. Beaty has prepared the program for the inevitable coaching tumult by having all recruits meet multiple staff during the recruiting process. No worries there.

When the GoR runs out, KU may have to petition Conference USA for admission.

At the rate we're going, Conference USA wouldn't take us.

And when does that happen?

MUST BE A HELL OF A RAISE. WHO WOULD WANT TO BE AROUND BIELEMA MORE THAN 30 SECS?

Yesterday, a few commentators were skewering Tom Keegan for carrying the story regarding the possible departure of defensive coach Calvin Thibodeaux to Oklahoma calling the article "mindless" and opining that it was "barely about KU". With today's news comes the realization that as many as 3 of our coaches may be departing this offseason and it's not even March yet! One may imagine that Beaty's already difficult job of turning things around gets increasingly more difficult with coaching turnover. Here's the thing, though: had Tom not written the story, there would certainly have come the boo-birds asking why kusports wasn't up to snuff in carrying a related/relevant story of Thibodeaux's possible departure. Let's face it: sometimes we are pretty knuckle-headed in that we want the news to cater to us and our perspective, and become a bit b#tchy about articles that fall outside of our expectation for what "should be" written about. I include myself in this (e.g., I thought the emphasis on Brannen Greene's late dunk was over the top), although I make it an effort not to editorialize about the subject matter too commonly. The best thing kusports can do is just to ignore some of us when that happens. If the shoe fits, wear it.

As it stands, it appears Tom was right: KU football just can't seem to catch a break.

Dang it Joe. I never get to post my comments on here because you ALWAYS say the things I would. Always the voice of reason. Also, one of the few people in social media world that is respectful. I honestly look forward to your insight on every column, although I had already thought the same. Much respect.

It appears Texas is losing some coaches as well...maybe there is an opportunity.

KU football can't catch a break, but if you're looking for a silver lining it's that Beaty obviously knows how to put a staff together. We went 0-12 and yet our staff is being dissected by the nation. Beaty surrounded himself with good coaches and that's the risk you take. If other schools don't want your coaches you probably shouldn't either. I am confident Beaty will fill the position with a great fit.

Departures like this are 2 sided. It's bad for KU to lose a coach like Mitchell because he is a great recruiter and developer of talent. The flip side however is losing a coach because more successful programs want your coaches or other schools want your coaches in positions higher up the ladder than they are at your school at least sends positive signs out there that the head coach knows how to pick quality assistant coaches.

It sucks to lose someone the caliber or Reggie Mitchell, but it's also s a signal that Beaty has assembled a quality staff that other coaches want to raid. It does speak well for Beaty's prospects to get KU going on the right track given time.

Hopefully, Coach Beaty has a quality replacement lined-up as Coach Mitchell has been.

Good luck Coach Mitchell. You WILL be missed.

Obviously I don't blame him. His talent has been wasted here. He'll have an All American running back at Arkansas within two years.

It's our Dline/Oline coaches who stink the joint up. We keep giving subpar coaches more time and have driven out the coaches that can make a difference.

Beatty you better take a page or two from the what-whould-Harbaugh-have done-if-he'd-taken-the-job book.

YOU are the bottom line. The guys you need are out there. Find'em.

I think I'll get tanked.

Joe said it well, I would just add that Beatty knows good coaches, and he knows they will be stolen away, but he also knows there's a bunch of good ones lookin for jobs.

Hopefully, some talented people looking for a promotion. Recruiting is the area that troubles me the most. We lose Kane, so we are hurt in KC. We lose Mitchell, we lose a guy that can recruit really excellent running backs.

Still, if we remember, when Beatty took the job, he said he was looking for people who could do both and that means, teach and recruit.

As far as the luck thing goes. Luck is when preparation meets opportunity, and that's the only way we can look at it.

Not good. He was the one peice of stability we had in this program. Dam

This whole mess is Perkins's fault.

Wondering if we'll ever climb out of this hole.