ISU rallies past Jayhawks after break

Kansas sophomore Chayla Cheadle, right, looks for a path to the basket around Iowa State's Meredith Burkhall (32) during their game Tuesday evening at Allen Fieldhouse.

Any time a 10-point halftime lead turns into a 10-point home loss, you’re bound to see a few long faces and hear a couple of heavy sighs from the losing team after the game.

Such was the case for the Kansas University women’s basketball team on Tuesday night following a 63-53 loss to Iowa State.

The loss was KU’s 13th in a row overall and 11th straight in Big 12 play, but, more importantly, left the Jayhawks scratching their heads over the lost opportunity.

“In the third quarter, I can’t really explain to you why we came out of the locker room like that,” said KU coach Brandon Schneider. “We took a nap. We were bad in every phase of the game.” 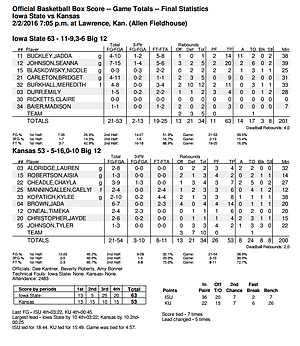 KU outscored ISU 15-5 in the second quarter but was outscored 25-10 in the third. The Jayhawks were flat from the start and ISU cut the Kansas lead to as few as three just three minutes into the second half. By the 3:35 mark of the third quarter, the game was tied and Iowa State never looked back.

“We didn’t come out with a mentality to step on their throats and continue to push and win the game,” said KU junior Jada Brown, who led the Jayhawks with 14 points on 6-of-7 shooting. Brown also added four rebounds, a block and a steal in 20 minutes.

“It’s been a long time since we had a player that had a really shiny stat line,” said Schneider in praise of Brown. “I thought it was her energy and activity level that really got her into the flow of the game. We felt like we were gonna be able to get some things if we attacked the basket, and Jada did that.”

KU topped the 49-point mark for the first time since Dec. 22, but it was the Jayhawks’ defense that frustrated Iowa State in the early going.

“I thought they really got up into us and made it really hard for us to enter the ball,” ISU coach Bill Fennelly said. “When they set their defense, we really had a hard time in the first half. Luckily we were only down 10 and not worse.”

Schneider said KU’s defensive execution in the first half was precisely what the coaches had hoped it would be. But the combination of Iowa State forcing the tempo and KU coming out flat proved to be deadly in the second half. 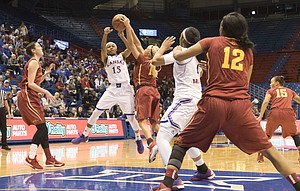 Despite a sluggish third quarter, KU did not go down quietly. But while the Jayhawks mounted their comeback by grinding out possessions and scoring tough buckets, Iowa State maintained control thanks to a breakdown by the Kansas defense. Three straight times after Kansas tied the game, ISU answered by reclaiming the lead with an uncontested bucket right at the rim.

The loss marked KU’s second this season to the Cyclones, but even though Fennelly’s squad swept Kansas, the veteran ISU coach left Allen Fieldhouse on Tuesday with kind words to say about the KU program.

“They’re going to be fine,” Fennelly said. “I think you have to give them a lot of credit. There’s no way you would’ve known they hadn’t won a conference game the way they competed, and that’s a tribute to the coaches, the kids and the fans.”

Next up, KU heads south to Waco, Texas, where they will face Baylor at 2 p.m. Saturday.