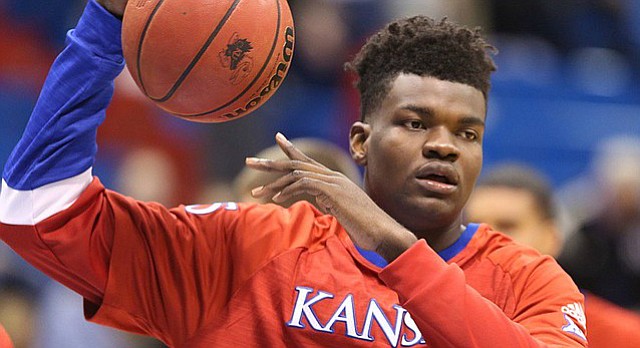 The depth in an already thin Kansas basketball frontcourt became much shallower on Wednesday, when the Jayhawks learned that a wrist injury suffered by 7-foot freshman Udoka Azubuike during Tuesday’s practice will cost the 17-year-old big man the rest of the season.

“Udoka tore ligaments to his left wrist in practice Tuesday that will require surgery and he will miss the remainder of the season,” KU coach Bill Self said in a news release. “Surgery should take place in the next few weeks and doctors are confident he will make a full recovery and be full-speed sometime this summer.”

Even though Self’s Jayhawks have operated with a four-guard lineup for the majority of the 2016-17 season thus far, Azubuike’s presence in the middle represented both serious size and tremendous potential.

The Nigerian native has started the past six games as the lone big man in KU’s starting lineup and averaged 5 points and 4.4 rebounds while also leading the team with 18 blocked shots.

His absence puts more importance on the play of senior Landen Lucas and sophomore Carlton Bragg Jr. — both starters to open the season — who have shown in recent games that they are working through the early-season funks that affected both players.

Lucas likely will return to the starting lineup in Azubuike’s place and Self said in the release that he was confident his veteran team would be able to absorb the bad news.

“We all feel bad for Udoka,” Self said. “He has worked so hard and has put himself in a position to have a tremendous impact on this year’s squad. This is a blow to our team, but I know that we will rally around this and Udoka will work hard to ensure a full recovery.”