Jayhawks among nation’s 10 worst teams according to preseason rankings

Kansas cornerback Chevy Graham (36) shows his frustration on the sideline as the Jayhawks are forced to punt during the third quarter on Saturday, Oct. 3, 2015 at Jack Trice Stadium in Ames, Iowa.

For all the optimism in the air at Anderson Family Football Complex and the progress being made on the field during preseason practices, at least one national outlet isn’t ready to project Kansas as an improved program from a year ago.

CBSSports.com ranked every FBS program in the nation — all 128 of them. Less than a month away from the season opener, the Jayhawks come in near the bottom of the list, at 119th. Or for the glass-half-empty population, 10th worst.

Kansas, of course, failed to win a game in head coach David Beaty’s first year, and the program has finished last in the Big 12 in four of the five seasons since the league did away with divisions, no doubt leading to KU’s lowly position.

No one within the program actively preparing for the coming fall chooses to dwell on shortcomings from the past, though. Headed into his second season in Lawrence, Beaty witnesses what outsiders don’t and repeatedly has spoken about how the 2016 version of the Jayhawks are better equipped for competition.

“That’s the biggest difference in our team right now than a year ago,” Beaty said earlier this week. “We have real competition. We have some depth.” 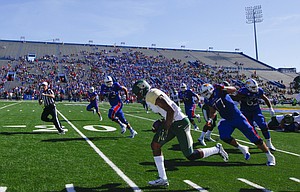 Kansas wasn’t the only power conference program to fall into triple-digit range, though. Three Big Ten teams — Purdue (102nd), Illinois (106th) and Rutgers (111th) — bottomed out in the preseason projections. Even the mighty SEC’s South Carolina showed up at 100.

Texas just missed out on the upper echelon, at No. 27. Tech ranked 47th, West Virginia was 51st and Kansas State fell smack in the middle of the massive list, at No. 64.

Naturally, KU’s players are all too familiar with the program’s recent woes, most notably last season’s 0-12 record. But even those who experienced the lowest of the lows, such as sophomore quarterback Ryan Willis, who started the final eight games of 2015, understand they’re better off focusing on building a better future.

“You know, it’s in the past. We haven’t forgotten about it. It’s kind of driven us to work harder this offseason,” Willis shared at KU’s media day. “Everyone wants to win. Winning cures all.”

Willis said the Jayhawks realize they’re rebuilding and they think they have enough talent on the roster to win games this fall.

They still have more than three weeks of preparation and development to get through before a Sept. 3 season opener at Memorial Stadium against Rhode Island.

Said sophomore receiver Steven Sims Jr.: “I think we’re starting off real good, actually. Everybody’s put in a lot of work this offseason. The strength and conditioning staff has been on us. It’s been a great summer, so I’m really excited for the season.”

We won't be very good, but the last place in the world I'm getting my expectations is from a national rag that pays very little attention to teams not named Alabama, Texas, USC and the likes. They know nothing about what we do or don't have on this team.

Well, at least we're not THE worst.

Texas just missed out on the upper echelon, at No. 27. Tech ranked 47th, West Virginia was 51st and Kansas State fell smack in the middle of the massive list, at No. 64.

That is all you need to know on how much of a joke this article is. I doubt they revisit this at the end of the year....

It's a long road back to respectability. I believe strongly we are on it. We just need a couple of wins to give alums, fans, the players and potential recruits, some optimism. We cannot continue to be the near equivalent of a Big 12 bye. Winning cures all.

"No one within the program actively preparing for the coming fall chooses to dwell on shortcomings from the past, though."

LJW -- idea for you: instead of looking for other magazine's articles to re-publish, how about get your act together on this website.

If you click on Next Game - Team Schedules, it goes here:

If you click that, then Football, it goes to the 2015 schedule rather than the 2016 schedule.

There's a glitch in the system that we're working on fixing — you might call this getting our act together — for that link and we hope to have it solved soon...

In the meantime, if you click on "Football" and then click "Schedule" from the menu there, you'll see the 2016 schedule, which has been up for quite some time.

I highly doubt anyone is surprised by this, and it'll be another tough year, but we'll see improvement. I count this is as Beaty's true first year. Things will only go up from here.

We will finish way higher than this ranking.

I agree with Humpy, and I hope you are right Doug. This is to be expected. At least there is really nowhere to go but up.

I wouldn't count on KU beating Ohio or Iowa State. Frank Solich is a good coach and Ohio played in a bowl game. Iowa State hired Matt Cambell, a coach with a proven ability to win. KU will beat Rhode Island, go 1-11. I would have loved to have seen the faces of the people supporting the firing of Mangino if some Nostradamus told them on the day they fired him they would need 6 seasons to win as many games as Mangino won in a single year (2007), and that in 6 years time they would win a total of 3 conference games. Those jokers would have laughed their heads off in disbelief. The Curse of the Mangino... how long will it last?

Get over the Magnino firing, Bryan, no need to keep bringing it up after so many years! There has to be a statute of limitation on that.

Bryan - couldn't have said it any better.

I'm still pissed off about it.

So what. What a ridiculous concept of ranking all the schools. Terrible analogy but here goes. We had more difficulty with the Viet Cong than we had with a large standing Army in Iraq. Consider the Air Raid offense guerrilla warfare. Perhaps that's why even mighty Texas and Oklahoma have abandoned the old style of warfare. The air raid is the great equalizer. I have confidence that we will have a couple upsets this year.

Hey it happened for a reason! We did not win a game last season. As Beaty says we have to Earn it. If we want respect we got to earn it!

Not too worried about all that. What I want to see are improvements from last season.Win/Loss total will not matter this season as much as better playing on the field.

I think things will look better and the depth seems to be better. Regardless Win Lose or Draw Im behind you Coach Beaty RCJH!