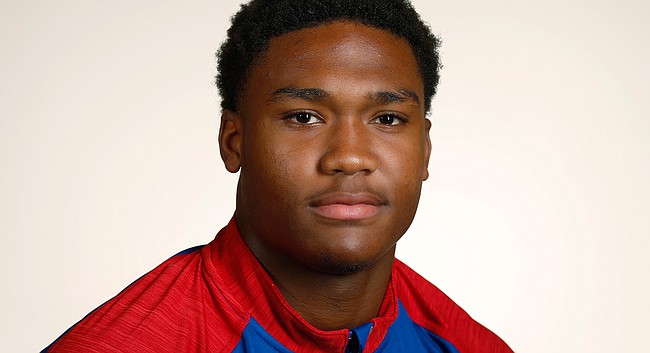 Sometimes, it doesn’t take long to form a hunch about a football player. Sometimes, all it requires is seeing how he is built, how he moves, how instinctive he looks.

Hunches don’t always prove accurate, but they make watching how an athlete develops interesting right off the bat.

An early hunch: Freshman running back Khalil Herbert will have a productive career at Kansas.

The first thing that made me pay closer attention to him was his thick build. He looks too developed to be a freshman. Then I noticed how he naturally runs low to the ground. That’s a winning trait for a running back because it makes him a smaller target, makes his gains a little longer because he’ll fall forward, and makes him less likely to fumble because the ball is not exposed.

Watching the speedy Herbert run during summer conditioning practice intrigued me enough that I placed a call to his high school coach, Mike Rumph, who is in his first year as cornerbacks coach at the University of Miami, his alma mater.

“When I first met him, I thought he was a track athlete playing football,” said Rumph, a first-round draft choice of the San Francisco 49ers in 2002. “I quickly changed my mind and said, ‘No, this is a football player who runs track.’”

Herbert, who rushed for 861 yards and nine touchdowns his senior year at highly competitive American Heritage High in Plantation, Fla., already had committed to Kansas when Rumph was hired at Miami. Otherwise, Rumph said, he would have tried to recruit Herbert to Miami.

“Without a doubt, because of all his intangibles,” Rumph said. “He’s strong. He loves the weight room and gets really good grades, too.”

“He has the instincts,” Rumph said. “He’s so compact and physical and he likes to run up the middle.”

His high school statistics don’t match those of many college backs, Rumph said, because he had to share carries with two other backs.

“He was running against the best of the best and was always getting us 100 yards a game,” Rumph said. “Playing high school football in South Florida, you play against the best. He’s been on a big stage, flown out of state, played on national TV. Nothing’s going to scare him.”

Kansas head coach David Beaty said before Saturday’s practice that it’s on the early side to form strong opinions, but also sounded as if he’s high on Herbert’s potential. He did not say whether Herbert would play as a true freshman or preserve the year of eligibility.

“So far he’s been impressive,” Beaty said. “He’s got great speed, great quickness, really good vision. We’ve got high hopes for him. But we’ve got a pretty decent stable of backs right now. If he’s playing for us, he’s pretty good.”

“I watch him go through an inside hole,” Beaty said. “He’ll slam it up in there. That’s one thing you look for.”

“It’s only been two days,” Hull said before Saturday’s practice. “However, I love what I’ve seen so far. I love his work ethic. I love his measurables. I love his athletic ability. He’s a hard worker. He’s a humble kid. And those are great characteristics for what it takes to be really good in this league, so I’m looking forward to seeing what he can do this year and beyond.”

That makes two of us.