Ford out, Cozart to start at QB Saturday at Iowa State 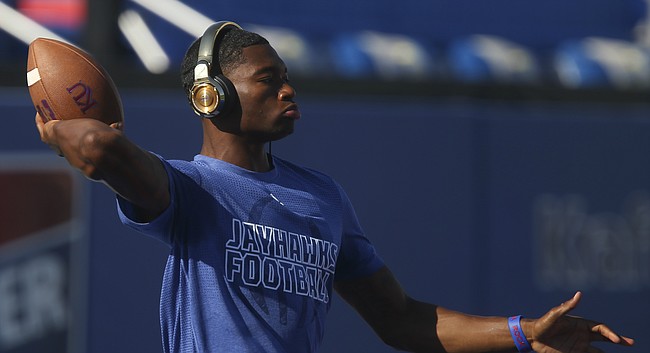 Kansas quarterback Montell Cozart (2) throws the ball around prior to kickoff against South Dakota State on Saturday, Sept. 5, 2015 at Memorial Stadium.

Kansas University football coach David Beaty revealed on Monday morning's Big 12 coaches teleconference that junior quarterback Deondre Ford, who started last week's loss at Rutgers in place of the ailing Montell Cozart, was out for this Saturday's game at Iowa State because of the injured thumb he suffered at Rutgers.

Cozart, who had a temperature of as high as 104 degrees last Friday night, did not start but was forced into action when Ford went down and played well, having what Beaty called one of his most efficient games of his career.

Beaty said Cozart, who earned the No. 1 spot during preseason camp, would start this Saturday's 11 a.m. kickoff at Iowa State, with true freshman Ryan Willis serving as his back-up.

"This week, Deondre Ford's gonna be out," Beaty said. "So we're back to where we finished that (Rutgers) game with Montell starting and then Ryan Willis will be the guy who needs to get ready for the back-up spot. And those guys will continue to compete this week. We're gonna always compete, all the way through the walk-through. They're no different than the rest of our team."

No time frame was given for Ford's return, which, initially, was diagnosed as a sprained thumb.

The Big 12 Conference announced Monday morning that the Oct. 10 game in Lawrence between Kansas and Baylor would kick off at 11 a.m. and be televised on FOX Sports 1.That will mark three consecutive 11 a.m. kickoffs for Kansas, which started at 11 a.m. (central time) at Rutgers and will kick off at 11 a.m. Saturday in Ames, Iowa.

Hey Matt, what are the rules on redshirting? Even though Willis has played a few snaps can he still redshirt for this season?

It's possible, but, here in a few games, I don't think it'll even matter. It sounds like they're going to use him a lot as the season goes on so that'll likely be the end of that.

As things stand today, Carter Stanley will almost certainly wind up red-shirting, which could be a great thing for him and the program.

One of Coach David Beaty's best attributes, do you ever hear negative language come out of his mouth? Even when he's discussing an individual player, the language is always directed in a positive manner at that individual player.

Hope that Ford recovers quickly. Montell did a great job given his condition - let's hope that it rolls into this week.

In checking ISU's results, they are solid this year. Toledo is a good team and Iowa isn't bad. It's not an unwinnable game, though. If we can get the run game back on track, we might be able to keep it close, then...who knows?

Im saying this not to put the team down, but to give a realistic perspective on the state of the program: when Montell Cozart is your best option at quarterback, you KNOW youre going to have a rough season.

I take your point, Joe. It's going to be important to remember that this team is fairly inexperienced, undersized and short-handed. Even if we won no games (which is a distinct possibility, I'm sorry to say), we may be able to claim some progress by getting players experience, adding talent, etc.

And while it's easy to yoke Cozart with a lot of blame (he's the focal point of the team as QB, after all), to be fair to the kid, he just went out and posted a QB passer efficiency rating of 162.3 despite running a fever of 104 degrees. If he'd average that for the season, he's a national top 20 passer. If you throw out the Memphis game (really rough by any measure), he'd be in the top 40 for the year.

Im all for being fair to Cozart, and the truth is I wonder to what extent we psychologically damage kids--even ones who arent very good--because of our interest in college athletics. So here's the balance, I think. Cozart has a lot of potential in a couple of other positions besides quarterback. He may have had a "decent" game...against Rutgers (which is not the same as doing that well against more than three quarters of other teams remaining on our schedule this season alone), but his body of work is lackluster. At best.

I really do think hes got some football skills in him. I just dont think he should be the one taking the majority of the snaps. If we're playing this season to get better, then we should be giving experience to someone who is the future of our team. Cozart is not that guy.

I tend to agree. As made evident by the fact that Cummings is recovering on the sidelines, Cozart wasn't likely going to be the guy, but here we are. And in two of our first three games, he's been fairly accurate and efficient in passing, has made plays with his feet and given us a chance (which, unfortunately, has been too much of a rarity at the position). Is he the future? I don't know. I'd love to see him get better. He's probably not the salvation of this year's team, but especially on a squad riddled with inadequacies, I just don't think he's performed as poorly as he catches heat for.

Many seem to believe that Willis should be given snaps to prove he's the future. I'm wholly confident that HCDB will give him the chance when he gets up to speed... and we'll see. Until then, I tend to focus my greatest hopes for improvement on the D, which is in desperate need of it.

Beaty is going to face some intense heat if Willis is not given some more playing time this year. I'm all for the "earn it" philosophy, but there is something to be said for common sense as well. If his redshirt is in fact burned for 2 measly plays then my faith in Beaty will be shattered...

I'm not nearly as down on Cozart as I was when I heard the first announcement he was the starter. Can he make all the throws, no, but has he shown an ability to hit the open man, make the short throws, scramble for some yards, etc. With a manageable defense it is possible to win some games with Cozart as the QB. At this point I hope they let him play the year out and see how he develops.