Scandal-embroiled Rutgers, which KU happens to play Saturday in football, is one case study

Between television contracts, ticket sales and donations, KU and its fellow large-conference universities have healthy and sustainable funding models, a KU scholar says.

In contrast, health, sport and exercise sciences assistant professor Jordan Bass’ recently published research focuses on a different category of schools: those that are questing for the same high level of athletics recognition but may not have the funding to back it up. 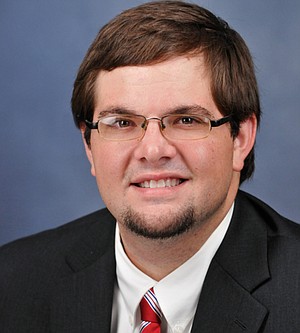 The authors argue that in the cases of many schools outside the Power Five conferences, their athletics “front porches” may look impressive and gain the desired attention for the schools but that their funding models are not sustainable.

“A lot of people wouldn’t know Boise State existed if not for football,” Bass said, citing one example. “But we wanted to examine where the money comes from to fund these athletic departments. For example, are we taking away from academic programs if we chase this dream of having a front porch program?”

Bass and his co-authors argue that many schools “invest heavily” in athletics, relying too much on student fees or allocations, or dollars that might otherwise be spent on academics. 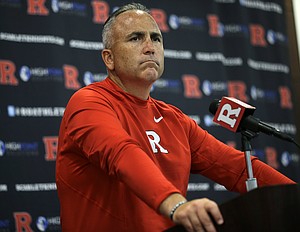 FILE - In this Saturday, Sept. 5, 2015 file photo, Rutgers head coach Kyle Flood listens to a question as he addresses the media after his team defeated Norfolk State, 63-13 in an NCAA college football game in Piscataway, N.J. Rutgers has suspended football coach Kyle Flood for three games after he contacted a faculty member over a player’s status. Rutgers President Robert Barchi announced the punishment Wednesday afternoon, Sept. 16, 2015, a day after he said he received an internal investigative report. (AP Photo/Mel Evans, File)

The publication points out that the amount of subsidy Rutgers provided to its athletic program in 2010 could have hired 256 assistant professors, or 132 full professors, at the school. There has been pushback there by faculty and students protesting the subsidies and the student fees that were raised to pay for sports.

The argument made by the Rutgers president, according to the publication, was that Rutgers athletics provided “positive branding, exposure and visibility for our university and the State of New Jersey.”

Bass said he did his dissertation at Florida State University, where he met co-author Bunds, on the funding of athletics through student fees and tuition reallocations. The new research builds on that, and includes chapters on the history of the NCAA useful for setting the stage for what’s going on today.

The research is timely now because university finances have become, in general, increasingly strained, Bass said.

“I think the public consciousness is much higher than it ever has been,” he said. People are questioning, “How are we funding athletics, and what are we prioritizing?”

Rutgers right now also happens to be illustrating another problem with “front porch” athletics programs that authors addressed in the monograph, which Bass said he worked on a year and a half.

As much as winning teams and popular mascots can boost a school’s profile, a sports scandal can quickly tarnish it regardless of athletics funding.

“We make the point in the monograph that once you’re known for athletics, that can be great,” Bass said. “It can also be not great ... if most people know you because of your football or your basketball team and something comes up, it can really harm the reputation of that brand.”

On an Fall Football Saturday when programs like Alabama, USC and UT all lost at home, it was nice not to experience another Kansas loss. Perhaps for this year, the best solution would be to not play at all.

My bet is in a couple of years the Power 5 conferences will shrink to a Power 4 with 16 teams each and no Big 12. If that were to happen, teams not in a Power 4 Conference will be "front porch" programs. Rightfully the presidents of the Power 4 schools, sans the SEC, are putting a premium on academics and cleaner programs.

Since arriving at KU in 2009, Bernadette Gray-Little has focused "bold Aspirations strategic plan, KU will fulfill that mission and achieve recognition as a top-tier public international research university." In June 2012 KUMC earned National Cancer Institute (NCI). A year later in the fall 2013, Gray-Little was named to the executive committees of the Association of American Universities and the Association of Public and Land-grant Universities. Over Gray-Little's tenure, in spite of the research funds flowing into the KUMC cancer program, KU's ranking has dropped continuously (89 in '09 to 115 in '15) to the point of seriously endangering our AAU status. Not all that long ago, Kansas was in the 50s.

If we lose our AAU status, KU severely risks missing the Power 4 cut, permanently placing KU Athletics as a permanent "front porch" program. For the sake of the University academics and athletics, the Kansas BOR needs to quickly look for a new KU Chancellor.