Kansas head coach Bill Self gets a healthy show of hands after asking if there are any returning members in the crowd who have been to Ladies Night Out before, Thursday, Oct. 22, 2015 at Allen Fieldhouse.

During a meet-and-greet/Q-and-A session with 450 attendees, Diallo, KU’s 6-foot-9 Mali native, introduced himself in English, then answered a question in French and finally in his native Bambara. 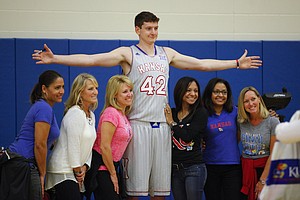 Diallo’s mastery of different dialects drew a loud round of applause, second only to sophomore guard Devonté Graham, who borrowed some material from the 2014 event that supports cancer treatment and research at Lawrence Memorial Hospital and the KU Cancer Center.

“Last year, I said Kansas has the best-looking women, and I’m sticking with it,” Raleigh, North Carolina, native Graham exclaimed, to screams and applause from the bleachers.

The women in attendance took a tour of the hoops locker room and meeting rooms, posed for pictures with players and coaches and were schooled about strength and conditioning, players’ uniforms and equipment, as well as hoops X’s and O’s from members of the basketball program.

Asked in the player Q and A which contest stood out as his favorite so far at KU, senior Perry Ellis said last season’s West Virginia-at-KU game.

“I got hurt that game, and my teammates stepped up. I was proud we were able to win the league (by virtue of 76-69 win),” Ellis said.

KU junior guard Frank Mason III was asked what would be the strength of this year’s team.

“I would say depth,” he said. “We’ve got a lot of guys who can come off the bench and spark the team. Most importantly, our great coach.”

Asked what the team’s free-throw shooting percentage would be in 2015-16, junior guard Wayne Selden Jr. said, “One hundred percent. I think it’ll be high 70s, mid 70s,” he added in a more serious tone.

Self chimed in: “With the new rules this year, officials will be calling games so tight, winning games at the free-throw line will probably be more important than ever.”

Fielding a question about what he thinks of KU’s new McCarthy Hall for the players, Traylor said: “It’s really cool. There’s a (basketball) court we go in to shoot whenever we want. We play ping-pong. Overall, there’s a lot more space.”

The Jayhawks headed straight from the practice gym to the fieldhouse to assist at Ladies Night Out.

“It might be a little tough. We worked hard today,” Ellis said. “But when we get going, we’re good to go. It’s all for a good cause. We’re just having fun getting together, clowning and having a good time.”

Noted junior forward Landen Lucas: “It’s awesome to see some of the same people come out year after year. It’s an amazing feat for them (those who have beaten cancer). For us to be around them and see how happy they are ... just to be here can show there’s a lot bigger things going on in people’s lives. Coach Self has a ton of different outside charity things we work on. We get to be around a lot of special things he’s doing. He definitely lets us get involved in everything.”

Self said the Jayhawks had a good practice before Ladies Night Out.

First exhibition is Nov. 4 versus Pittsburg State. Tipoff is 7 p.m. in Allen.

Recruiting visitor: Jarrett Allen, a 6-9 senior forward from St. Stephens Episcopal School in Austin, Texas, who is ranked No. 20 nationally in the Class of 2016 by Rivals.com, will begin his official visit to KU today. He is also considering Notre Dame, Houston, Indiana, Kansas State, Kentucky, North Carolina and Texas. ... Mitch Lightfoot, a 6-9 senior forward from Gilbert (Arizona) Christian High, will announce his college choice at 3 p.m. Central time Saturday at the 2015 Arizona Preps Fall Showcase in Glendale, Arizona. The finalists for Rivals.com’s 117th-rated player nationally are KU, Arizona, St. John’s, Utah and Stanford, with many recruiting analysts believing KU will win out over U of A. Lightfoot averaged 17.9 points, 9.7 rebounds and 3.9 blocks a year ago.

Wayne, if you want KU's team FT% to be mid to upper 70%, you need to do your part and not be in the low to mid 60% range like the last 2 years, especially if you're going to be driving to the lane as much as you should be at the 3 this year.

When you make statements like Selden did and shoot the % Selden did last year, he better be ready to back them up.

Nothing personal Aaron, but posting your thoughts in public might not be a great idea.

I haven't looked at the FT% of Seldon, but if it is true then I believe Aaron has a great point.

Aaron DOES have a point but Wayne needs to wait until the season opener to start backing up his statement. Personally, I think this year will bring out a Wayne Selden unlike what we've seen before. He has all the talent needed to play in the NBA but he needs to put it together consistently and most importantly, when the game is on the line.

That is what I expect to see from Selden this year.

Nothing personal Jay, but posting your thoughts in public might not be a great idea for you actually.

Just because someone says something less than "super positive" about our team or a player does not make their point wrong. Aaron is one of the most articulate people who post on here.

His point is not only valid but right on topic.

Roddy...You and A-Ron get right over and tell Wayne that his free throw shooting actually impacts the overall team free throw percentage. I'm sure this new information will change everything that young Mr. Selden does..

Maybe you could give him some lessons Aaron. I'm sure he would appreciate the help given the kind of young man he is.