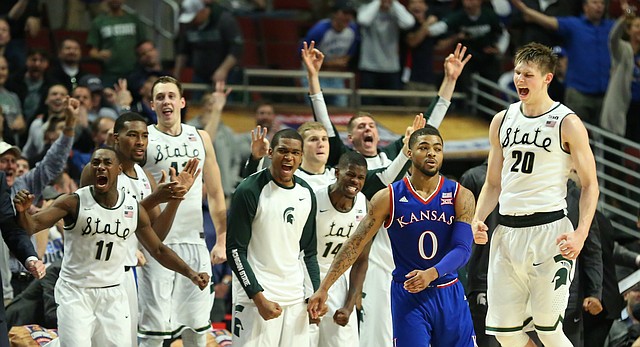 After controlling most of the game on both ends, the Jayhawks fell victim to the versatile skill set of Michigan State guard Denzel Valentine on Tuesday night.

The veteran who helped guide the Spartans to the Final Four last season recorded a triple-double of 29 points, 12 rebounds and 12 assists to help No. 13 MSU knock off No. 4 Kansas, 79-73, at Chicago's United Center in the Champions Classic.

KU senior Perry Ellis was the game's best player for the first 25 or 30 minutes and Ellis, as expected, led Kansas (1-1) with 21 points and added 6 rebounds. But Valentine took over down the stretch, hitting big shots and setting up teammates for others.

Wayne Selden Jr. (12) and Frank Mason III (14) also reached double digits for the Jayhawks, who struggled offensively for much of the final 10 minutes and simply had no answer for Valentine, who became just the fourth player in Michigan State history to record a triple-double. 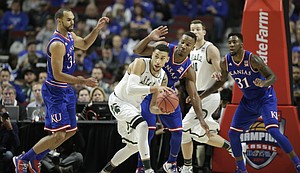 The loss dropped KU to 1-4 all-time in the Champions Classic showcase, 0-2 against the Spartans in the event.

• The game turned when: The final horn sounded. The Jayhawks hit Michigan State with a mini-spurt midway through the second half that featured buckets by Ellis and Mason and pushed KU's lead to 61-50. But the Spartans never quit after that and used an 18-5 run to build a 68-66 lead that set the stage for the wild back-and-forth finish.

• Offensive highlight: Pick any one of Ellis' buckets, but one of his biggest came when he crashed the glass late for an offensive rebound and put-back (seemingly in the same motion) that tied the game and kept KU right there.

• Defensive highlight: With the teams racing up and down in transition midway through the second half, MSU senior Bryn Forbes took a pass from Valentine and went right at Sviatoslav Mykhailiuk. Rather than giving up the layup or the foul, Mykhailiuk elevated, hung in the air, altered the shot and forced an out-of-bounds situation that gave the ball back to KU.

• Key stat: After even shooting in the first half — both teams shot around 38% in the first 20 minutes — Michigan State responded by shooting 53 percent in the second half to just 31 percent by Kansas.

• Up next: The Jayhawks head to paradise next week to open play in the Maui Invitational against Chaminade at 8 p.m. (central) on Monday. Win or lose, KU will play Monday, Tuesday, Wednesday in Hawaii. 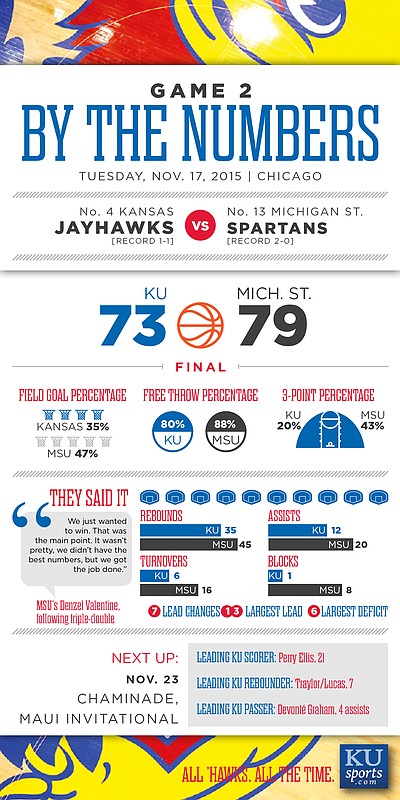