Fire away: Svi Mykhailiuk drains 5 from deep in Jayhawks’ rout

Nobody discouraged Kansas University sophomore Sviatoslav Mykhailiuk from firing shots from beyond the arc after his 0-for-3 effort in last week’s exhibition opener against Pittsburg State.

Not his teammates, who have seen him light it up at practice.

And certainly not his coach, who envisioned bucket after bucket from deep when he recruited the 6-foot-8 Ukraine native.

“Coach (Bill Self) was like, ‘Keep shooting and making shots,’’’ Mykhailiuk said after hitting five threes in eight tries, good for 15 points (in 21 minutes) in Tuesday’s 95-59 victory over Fort Hays State in Allen Fieldhouse. 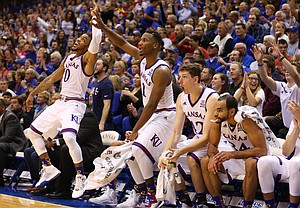 “He tells that to everybody: ‘If you are open you can shoot.’ He wanted me to be aggressive and keep shooting. The first game,” Mykhailiuk added, “I was kind of far from the three-point line and not open. This game Frank (Mason III, 14 points, six assists) and Devonté (Graham, 11 points, four assists) were driving the ball well, which led to the open shot for me.”

Mykhailiuk went 1-for-2 from three the first half and 4-of-6 the final 20 minutes.

“If you make the first one you believe you can make more,” said Mykhailiuk, who canned a three to give the Jayhawks an early 16-5 lead. “I knew if I kept shooting I’d make a lot.”

Mykhailiuk hit 15 of 52 threes his freshman season for 28.8 percent. His personal best was three threes in a game on two separate occasions.

He’s hoping to fare much better his soph campaign.

“This year will be easier for me. I’m more comfortable. I’ve got more confidence. It’s my second year. I’ve been here a year,” he said.

Mykhailiuk’s teammates are rooting for the personable player. Mason did a little dance after one of Svi’s second half triples.

“I couldn’t even tell you (why). I just did something. I was that excited, just happy for him,” Mason said. “I was happy to see the ball go in for him, boost his confidence, which helps the team win.”

“I saw it on the screen (videoboard) after,” Svi said. “We cheer for each other, help each other. When somebody makes a shot, the bench cheers for the guy.” 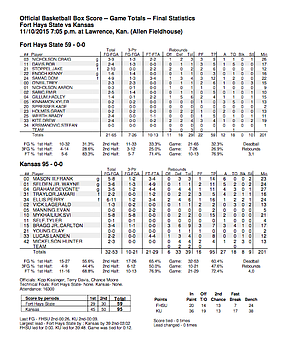 Self said the Jayhawks needed the shooting spree from Mykhailiuk with Brannen Greene missing the game after his hip locked up after warmups. Greene had offseason hip surgery.

“Svi was good. He almost got a loose ball, too. We would have been really excited about that,” Self said with a smile on a night KU hit 10 of 21 threes and 60.4 percent of its shots overall to Fort Hays State’s 32.3 percent. “He was aggressive. He’s a ball mover and shooter and can put it down, but if he is focused on ball moving and shooting and lets those other guys get him some shots in transition, then certainly he would be better.”

Mykhailiuk — he wore a sleeved T-shirt under his uniform for the second straight game for no particular reason — gave it a shot when asked if he reminds himself of any NBA player when he’s on fire as he was on Tuesday night.

“I don’t know, maybe Klay Thompson,” he said of the 6-7 Golden State wing. “Manu Ginobili. I don’t know,” he added of the 6-6 San Antonio Spurs guard.

The Jayhawks will open the regular season against Northern Colorado at 7 p.m., Friday, in Allen Fieldhouse.

Bad news about Greene's hip. I hope it's nothing serious. I thought Self wanted to see if he could keep his chair out of the lane for an entire game. Now that we know he can do that, hopefully the hip thing recovers and he can have a great year.

If that's "fools gold" then I'm a fool in love. ;) way to go Svi, you've worked very hard and deserved to have that type of game. It's not a fluke you are an exceptional shooter who will light it up all year. Svis 3s were like oxygen to the offense, it just made the team more free flowing and open and actually entertaining to watch. keep it up!

Another game like that and we can count on the media folks to begin asking Svi all kinds of questions about his shot. Who taught you to shoot? How did you develop your rotation on the ball? What role does arc play on your success? They have started out with the confidence thing and the T-shirt. They did the same thing to Brannen last year when he went on his little hot streak. Of course, we didn't know about his hip, but it seemed like he didn't hit a shot the rest of the year after they forced him to deconstruct his shot. Leave shooters alone. That is why coach is telling them to "shoot the ball when open." Don't think...shoot. Shooters are better the less they think. They can think about other aspects of their game like defense and keeping your guy in front of you. The likes of Brannen and Svi having success are serious game changers especially with the new rules where the use of muscle will be limited and skills will be paramount.

I think it must come from his volleyball experience.

Their undersized team had 11 OR rebounds. We need Diallo on the glass! Better taller teams will give us trouble there.

You are right Rodney. Need two bigs in all the time rotate the 3rd guard around our double point set up and Perry.

I'd have to watch again, but was that more due to poor shooting (and atypical rebounds, like West Virginia)? Or were we not being aggressive enough?

Note to Bud Stallworth in the post game broadcast who said Self had probably benched Greene for violating team rules. That is not always the case. Don't assume because you are usually wrong.

I missed that completely.. I was watching the game along LJW live commentary and no one knew why Greene didn't play. I agree w/no need to speculate. Wait for the facts. I almost wish it was disciplinary. Really hope that Greene doesn't have hip problems throughout the season.