Kentucky to face Kansas at Allen Fieldhouse next season

Kansas forward Landen Lucas (33) grabs a rebound from Kentucky center Dakari Johnson (44) during the first half of the Champions Classic on Tuesday, Nov. 18, 2014 at Bankers Life Fieldhouse in Indianapolis.

The Kentucky Wildcats are coming to Allen Fieldhouse during the 2015-16 college basketball season.

The Big 12 and Southeastern Conferences on Thursday afternoon announced the match-ups for the 2015-16 Big 12/SEC Challenge and the UK at Kansas match-up on Jan. 30, 2016 headlines the slate.

With 2,153 all-time victories, Kansas ranks second behind Kentucky (2,178) in NCAA Division I men’s basketball history. That fact figures to be just one of the many aspects of the showdown that will make this one of the marquee games of next season.

"I'm sure our players and fans will be excited about the match-up between the two winningest programs of all-time," KU coach Bill Self told the Journal-World on Thursday. "It's very unique to play a game of this caliber midway through the conference season, but will give both programs great exposure."

The upcoming Big 12/SEC Challenge will mark the seventh meeting between the two schools in the Self era at KU. The series is tied at 3-3 and includes two meetings during the 2011-12 season at the ESPN Champions Classic in New York and the NCAA title game in New Orleans, both UK victories. 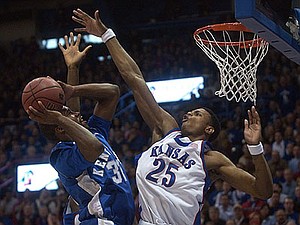 Kansas University freshman guard Brandon Rush, right, rises to block the shot of Kentucky's Joe Crawford during the first half of the Jayhawks' lopsided 73-46 rout of the Wildcats. Rush had 24 points, 12 rebounds, four assists, two blocks and a steal in the victory Saturday in Allen Fieldhouse.

Kentucky leads the overall series with Kansas, 22-6, but the Jayhawks have won three consecutive KU-UK matchups in Allen Fieldhouse, with the last being a 73-46 victory on Jan. 7, 2006.

Kentucky has won the last three meetings in the series, most recently on Nov. 18, 2014 when then-No. 1 Kentucky defeated, then-No. 5-Kansas, 72-40, in the ESPN Champions Classic in Indianapolis.

“The addition of Kentucky to our home schedule makes it one of the more attractive home schedules that we’ve had," Self added. "Even though the game is during conference play, I know with Kentucky coming here the interest level will be very high. Anytime you get the opportunity to have the number one and two winningest programs in college basketball face each other, the attention for that game will be great.”

For the first time, all games in the challenge will be played on one day — Saturday, January 30.

ESPN, ESPN2 and ESPNU will combine to televise every game of the third edition of the annual event. Each conference will be the host school for five games.

In addition, ESPN’s College GameDay Covered by State Farm will originate from a to-be-determined site of one of the day’s games.

“The Big 12 is proud to once again take part in the Challenge,” Big 12 commissioner Bob Bowlsby said in a release. “Our teams have had unprecedented success on the basketball court over the last two seasons and we are excited to provide the fans more quality opponents on the schedules.”

Three games will pit ranked squads against each other: Kentucky at Kansas, Iowa State at Texas A&M and Oklahoma at LSU.

Georgia at Baylor - First meeting between the schools

Oklahoma at LSU - Teams have split their previous four matchups

Texas Tech at Arkansas - 96th meeting between the schools, first since 2006