Kelly Oubre Jr.’s one season at Kansas University made him a top-15 pick in the 2015 NBA Draft.

Yahoo’s Adrian Wojnarowski reports the Hawks will trade him to Washington. 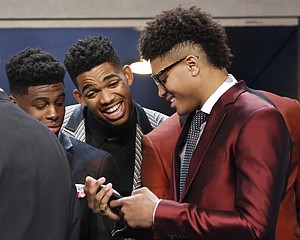 Once NBA commissioner Adam Silver called Oubre’s name, he became the 13th first-round pick out of KU to play for coach Bill Self, who arrived following the 2002-03 season.

Since 2010, at least one Jayhawk has been taken in the first round of the draft every year.

Alexander not drafted: Oubre’s KU teammate Cliff Alexander didn’t turn out to be the lottery pick many projected out of high school. He didn’t even hear his name called in the 60-pick, two-round draft after leaving early.

Alexander’s stock fell throughout his one season at Kansas, where he averaged 7.1 points, 5.3 rebounds and 1.3 blocks in 17.6 minutes a game, and missed the last month of the Jayhawks’ season due to an NCAA investigation into his eligibility.

— Check back in later at KUsports.com for much more on Kelly Oubre Jr., Cliff Alexander and the draft.

SECOND-ROUND PICKS OF SELF ERA

(Draft info from Stats.NBA.com — Players listed with team that drafted them; some got traded after being picked)