When Aaron Miles watches basketball, he can’t fight back his strong personal bias in favor of point guards.

After all, that’s the position Miles takes every time he steps foot on the court. He mastered his floor general skills at Kansas University, and remains the program’s all-time assist leader (954) 10 years after his college career ended.

Miles, a native of Portland, Oregon, hasn’t neglected his craft since. In fact, it has taken him all over the globe. This past season, he played for Lokomotiv, in Russia.

The past couple of weeks, Miles dished knowledge instead of dimes, working as a coach at Bill Self’s basketball camps. He spent some time with Self’s current crop of Jayhawks, too. Wouldn’t you know it, he gravitated toward two players in particular: junior Frank Mason III and sophomore Devonté Graham.

No offense to any of the other talented KU players, but the point guards are Miles’ favorites.

“I love ’em,” Miles said of the Jayhawks’ lead ball-handlers. “They work hard and I think, as point guards, we automatically are leaders. By being a leader, you have to lead by example, and I think they do a great job of that. And they’re becoming more vocal, which is obviously what we also need.” 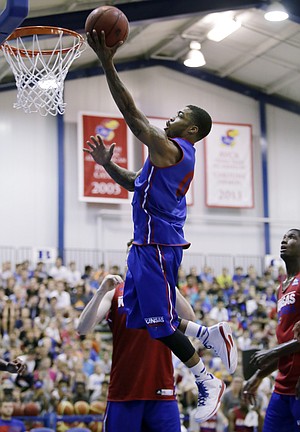 Graham suffered a bit of a setback this past week, when he partially tore a tendon in one of his quads. Self said the sophomore likely will miss regular basketball activities throughout the summer, as he recovers. Most notably, KU won’t have Graham in uniform for the World University Games, in South Korea, where Mason, SMU’s Nic Moore and late addition Julian DeBose of Florida Gulf Coast will share time at the 1-spot.

Miles watched KU’s two point guards from afar this past season, and thinks Mason and Graham will bring even more to the program going forward. Mason averaged 12.3 points, 4.0 assists and 1.4 steals as a sophomore, and made 40.7 percent of his three-pointers. Playing his first season of college hoops, Graham scored 5.9 points, passed 2.1 assists and hit 42.5 percent of his threes, in 28 games.

While both play point guard, Miles likes that they aren’t clones of each other.

“Obviously, I think Frank is just a natural scorer and Devonté has a little bit more of a traditional point guard type of play. … That’s not saying Devonté can’t score, but his natural instinct is to drop a pass or run the show,” Miles clarified. “Frank is just in total attack mode. I think they complement each other real well.”

Occasionally in 2014-15, Self put his two point guards on the floor together. Miles, of course, loves that idea, and hopes to see the two side by side even more next season. 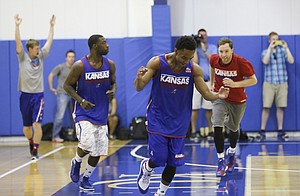 In the season Miles mentioned, 2001-02, KU averaged 90.9 points per game with three quick guards running the floor simultaneously under former coach Roy Williams, and the Jayhawks reached the Final Four.

Miles thinks a pared down version of that, wwwith Mason and Graham pushing the tempo, would mean trouble for the Jayhawks’ opposition.

“Nothing against anybody else on the team, but as a point guard, me personally, I feel like we’re typically the smartest players on the court,” Miles said. “When you mix that in with the skill set these guys have, now we’re playing at a faster pace and hopefully there will be higher IQ on the court at the same time — it should be.”

Miles isn’t a coach yet, but it could be in his future. Right now, he’s waiting to see how a nagging injury heals up. He certainly hasn’t ruled out continuing his pro career, but said retirement is coming sooner, rather than later. That’s one reason he wanted to work at Self’s camp this summer.

“I’ve got more days behind me that in front of me,” Miles said. “So I’m just trying to position myself, set myself up.”

The point guard said he learned much from Self and other coaches, and left with a better feel for how to approach everything from that side of the game.

“I don’t know exactly what I want to do,” he said, “but obviously I think (coaching) would be a great option.”

If that day comes, Miles might have a hard time not playing favorites.

I would be very much in favor of hiring Aaron Miles to replace Jerrance Howard in the near future.

Personally, I am not all that "High" on Jerrance, but fromm what I understand, Jerrance is a stud when it comes to recruiting and we don't want to send him to another program. Plus, now that he has a past, my guess is he will not be in the head coaching randks at the D1 lever anytime soon. So he is doing well to to stick with KU and the loyalty we ahve shown him. So for now, keep him recruiting, but I do think we could use a "Big" man's coach and a little man's coach. Hard to replace Manning, and in reality we haven't had a good point guard situation since Collins!

So you claim Jerrance Howard is this great recruiter. Let me ask you a couple of questions then.

That should speak volumes to everyone about where Bill Self views Howard right now.

... not from a recruiting perspective I wouldn't. I would prefer he develop some coaching skills and develop some recruiting grounds elsewhere if it means cutting loose a key recruiting coach to bring him on board. In the long term, it would be awesome to have him on the staff.

You both make some good points. In the end, you come to the same conclusion that Miles would be a great addition to the KU staff at some juncture. I certainly agree.

Countdown to Rodney complaining about all this "sunshine pumping" in three, two...

Get a life Benz. Seriously you need to focus on the things you can change not little old me. I used to think you are better than playing in the dirt for no reason, but maybe this is just who you are.

LOVED those 3-guards on the floor that season. Young, fast, and SO many scoring threats - with Collison and Gooden as well! Similar to this year's Golden State Warriors - except no NC, dang! (perhaps mediocre defense?).

My memory of Miles is that he seemed pretty mature as a freshman, along with Langford and of course Wayne. No doubt the upper classmen (Hinrich and Boshee) took a lot of the pressure off.

The defensive end was never Roy's focus. His teams played beautiful 94 foot offense,i.e. secondary break, pushing the ball hard after a made basket etc.. Unfortunately for Roy and KU, NCAA tournaments games are seldom beautifully played and more often than not are ugly, physical, defensive struggles where possessions and points are at a premium.Self's defense first philosophy generally is more conducive to tournament success, the last 2 years not with standing. Without question, we need to become more efficient offensively than we were the last 2 years. From a personnel standpoint, I think this group is better suited to play the tough defense that Coach demands.