New Kansas University women’s basketball coach Brandon Schneider added a little experience, depth and talent to the program Friday, with the announcement that former USC guard McKenzie Calvert will join the Jayhawks as a transfer.

The 5-foot-9 native of Schertz, Texas, who entered college as a five-star recruit, will have three seasons of eligibility remaining after sitting out the 2015-16 season, in accordance with NCAA rules.

"Kenzie is an athletic guard who is the complete package offensively," Schneider said in a KU press release. "She is strong, explosive and very fundamentally sound. Kenzie also takes great pride in her ability to be a lock-down defender. Her skill level and aggressive mentality will make her an immediate impact player in our program. We are thrilled she has chosen to become a Jayhawk." 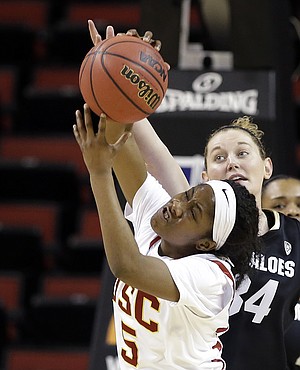 Southern California's McKenzie Calvert, left, reaches for a loose ball with Colorado's Jen Reese during the first half of an NCAA college basketball game in the Pac-12 women's tournament Thursday, March 5, 2015, in Seattle. Calvert transferred to Kansas in the offseason, and will become eligible for the Jayhawks in the 2016-17 season. (AP Photo/Elaine Thompson)

In her one season with the Trojans, Calvert averaged 10.2 points in 25.7 minutes a game, and started seven times as a freshman. Playing primarily as a reserve, she knocked down 36 of her 106 three-point attempts (34 percent) and averaged 2.1 rebounds.

In her first two Pac-12 games at USC, Calvert scored 16 points against UCLA and 12 versus Oregon, earning her the conference’s freshman of the week award.

At Byron P. Steele High, Calvert stood out enough that ESPN HoopGurlz ranked her the No. 15 overall prospect in the Class of 2014. On the AAU circuit, Calvert played for DFW T-Jack and the Schertz Jaguars.

None by Brandon Schneider

Good get. Good start to the program.

Why did she leave USC?

This is a nice flip compared to all the top recruits that came to and transferred away from KU in recent years.