Kansas track off to fast start at Outdoor

Eugene, Ore. — Two Kansas University male pole vaulters finished in the top 15, senior Michael Stigler won his semifinal heat of the 400-meter hurdles, and Lindsay Vollmer had a career-best, top-five start to the first day of the heptathlon as the NCAA Outdoor Track & Field Championships kicked off Wednesday at Hayward Field.

“It was my first national championships, so I was nervous but excited,” Albright said. “Those first attempt clearances were great because they really helped calm me down and get some confidence. This meet really has me pumped me up for my next few years here. Hopefully I can make my way back here and compete for a higher spot next time.” 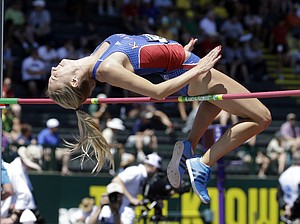 Kansas University’s Lindsay Vollmer clears the bar in the high-jump event in the heptathlon competition at the NCAA Outdoor Championships on Wednesday in Eugene, Oregon.

In heptathlon, Vollmer was in fifth through four of seven events. She had three sixth-place finishes (100-meter hurdles, 200 meters, high jump) and an 11th (shot put). She has 3,621 points and is on pace to eclipse the 6,086 points she amassed in winning the 2013 NCAA title.

“I felt pretty great today,” Vollmer said. “I had a couple PRs, and my overall Day One score is the best I’ve ever had, too, so I really don’t have much to complain about. Tomorrow I just need to keep the momentum from day one and stay consistent. With that, hopefully that will be enough to place really high.”

“Today I came out, stayed focused and just executed my race,” Stigler said. “Today isn’t the day where a win counts, though. That happens on Friday, and that’s the race that counts. Anyone out there will have a chance to win if they put together a good race. I just hope I can go out there, run my race and be up there at No. 1.”