College coaches line the sideline. Fans and players on the other teams fill the seats, all sides of the courts and jam the exits.

They all want to catch a glimpse of Porter, a 6-foot-8 forward from Columbia, Missouri, and the No. 2-ranked player in the nation by Rivals.com in the Class of 2017. Porter scored a game-high 27 points in a win for his AAU team, MoKan Elite, on Thursday and dropped another 21 on Friday.

The attention is nothing new for a player who has already cut his list of potential schools to 17 and had a dunk last year that earned him the top spot on SportCenter’s Top 10 plays. 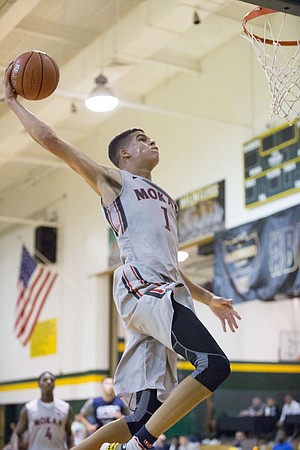 “It’s definitely grown every year as I get older — attention has grown,” Porter said. “I mean, that’s a good thing. But it’s also something that you have to learn how to handle. My parents … have both been through it, so they kind of keep me humble and just help me through the whole thing.”

Porter announced Thursday that he plans to attend the upcoming Late Night in the Phog, and he keeps in regular contact with KU coach Bill Self and assistant Norm Roberts.

“It’s not really a factor,” Porter said. “I’m not pressured to go to Mizzou or not go to Kansas by my family, at least. But by people in town, of course I am. Living near Mizzou doesn’t really affect going to Kansas at all.” 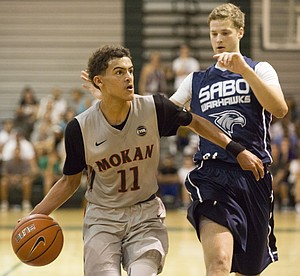 Another player attracting a lot of attention is Trae Young, Porter’s MoKan Elite teammate. The 6-foot-1 point guard, ranked No. 28 by Rivals, attended Late Night in the Phog last year and plans to watch again this year.

“I’m playing a year up, and I’m playing in the EYBL — playing on the biggest stage in America in high school basketball,” Young said. “I feel I’ve performed pretty well. So, I mean, I’ve think a lot of people have noticed. I know I have a lot to improve on and a lot to get better at.”

Young’s father, Rayford, starred at Texas Tech and has helped his son adjust to the recruiting process.

“He gives me advice that not a lot of people can give me,” Young said. “It’s fun. I know a lot can happen between now and my decision time, so I’m going to continue to count my blessings and working hard.

Trent recalls KU offer: Gary Trent Jr., ranked No. 10 by Rivals in 2017, picked up a scholarship offer from KU on the same day he made the first cut for the 16U national team in May, representing the U.S. in Argentina and eventually earning a gold medal.

Trent, a 6-foot-4 guard, is from Apple Valley, Minnesota and played in high school with Tyus Jones, the former Duke point guard and No. 24 pick in this year’s NBA draft.

“It was a great day because I made the team, and then I got the offer from Kansas,” Trent said of the KU offer, adding it’s very early in his recruiting process. “It was great. I’m really enjoying it all and I’m glad they offered me, and I’m looking forward to moving on with them in the future.”

Bamba talks KU: Mohamed Bamba, a 6-foot-11 stretch forward from Harlem, New York, ranked No. 4 in 2017, picked up a scholarship offer from Kansas in April, but his relationship with KU isn’t where he wants it to be.

“Great program,” said Bamba, who plays for the PSA Cardinals 16-and-under squad. “I know a little about them because Cheick (Diallo) goes there. But I don’t really have the relationship that I want yet with coach Self. But I have a feeling it’s going to get there.”

I do not mean to cause any undue stress with any "key" posters on here, but I think this is more good news! I do apologize in advance if this offends anyone. Especially because I am commenting on recruiting, a taboo topic to some which is odd since it is a huge part of our program.

To be clear, I doubt anyone on here would confuse me with being over the top positive with what I say. I am just commenting here like I normally do, objectively and how I see it. Anyone who tries to project or read something that is just not there into my positive comments, or comments on recruiting, does not understand this. Sorry for having to use this space to make this clarification but the unwarranted diatribe on a earlier article was unjustified, unnecessary and by the reaction unwanted.

Enjoy our team. Its sunny here today, the puppy is happy, how could anyone, really "anyone", be in bad mood today?

Because I spilled my beer?!?

Look up narcissist in the dictionary and there's a picture of you, bud.

Wut? Long forgotten; not even a hint of a Police Action.

its nice to see us showing the interest, and well deserved interest in porter, however don't really feel at this point anyways our shot is that strong at him, but with all young kids things can change at the drop of a hat. Now Trae Young, I feel like we have a better shot at from what I've read although has been mentioned as part of a package deal, and I believe the package leader is Duke I think, so again who knows. Now appreciate the lovely responses yesterday, not getting into that much as it sure sounds as I step on little guys toe's and hurt some sensitive feelings so enough of that. I appreciate what I have to say being critiqued, I apologize for not majoring in English and punctuation soooo, my only suggestion is when you see my name, just automatically slide right on by it as I am a absolute English, grammer. punctuation nightmare, problem solved, no fuss, no muss, no headaches. Meantime I will continue to kick back and read YOUR posts, and admire the correct way how a post should be administered on this site. Again thank you so much for pointing out my flaws, kinda funny though as horrible as it was I have this feeling you STILL in the end run knew EXACTLY what I was getting at, nice really nice. ROCK CHALK ALL DAY LONG BABY. hope I spelled that right

Rodney, you are doing fine. I know that we disagree sometimes, but when you are on the mark, you nail it perfectly.

It indeed should continue to be a bright future in recruiting, especially if some of those mentioned in this article commit to KU. Seems like many of them have strong ties to the competition, but I also know that Coach Self and his staff can compete with anyone.

I especially like the fact that KU generally recruits solid citizens. There may be occasional glitches, but it is obvious that the staff weighs this factor greatly.

One other point. You referenced a previous diatribe on an earlier article, and I was curious to see what that was.

I don't know if I pulled up the correct article, but I think it may have been the one in which you presented some statistics on Perry Ellis' performance in the World University Games. If so, assuming your statistics are correct (and I have no reason to doubt that they are), then you were spot on with your analysis, and I said so.

Unfortunately, Brianna took issue with my defense of you which indeed was unnecessary. Therefore, even though the article is several days old, I answered Brianna. Among other things, I clarified that I am not "new" to this website as I have been posting for over a year or two. In addition, I reiterated that we have disagreed on occasions, but hopefully when we have, I haven't made it personal. Nevertheless, I am sure that I have slipped at times.

To paraphrase what you said above in your post, it really is kind of silly how we can get so exercised over a subject like basketball and recruiting. It is sunny here today also (maybe too much since I am in Arizona), and the dogs continue to give us unconditional love.

Recruiting is highly essential to our success, and I enjoy hearing about how we are doing on some major prospects because to be a true fan of our teams is to be interested in all of the aspects that influence our success.

Yes, we won the gold and deserved a week of enjoyment on that, but this is also a critical period for summer recruiting so that is news I will always embrace. With us losing upwards to 4-5 guys this year it will be important that we have a very good recruiting class coming in.

Not just this site Adam, the entire internet is becoming a pissing contest.

How awesome would it be if we could get Porter, if for no other reason, than to infuriate the Tigers? And better yet, they will never get to see him in action because we don't dignify Col-Dumb-ia with our presence any more!

Mike, Trae... come on down to good 'ole Lawrence and play for the Jayhawks!!!!

KU dining better step up their vegetarian game to get Porter to come to Lawrence. Can you imagine the amount of food that a family of two parents 6'4" and 8 kids goes through growing up? Crazy!