When returning Kansas University starter Michael Cummings went down because of a serious knee injury during the spring game back in April, the focus for football’s most important position immediately shifted to junior-to-be Montell Cozart and incoming freshmen Carter Stanley and Ryan Willis.

Cozart, who started the 2014 season as KU’s main man, is the incumbent and most likely choice to win the starting job this fall.

Stanley, a quality kid with good mobility and an impressive arm, is the fresh face who came into the picture late in the recruiting process and the guy many are pointing to as the perfect fit for the program.

And Willis, a big, tall, athletic dart-thrower from nearby Bishop Miege High, is the stealth candidate about whom it might be time to start talking a whole lot. 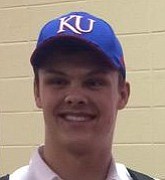 According to multiple eyewitnesses, the 6-foot-4, 205-pound Willis has been a monster this summer, flashing good leadership skills, tremendous work ethic and his big arm on a regular basis.

It is, of course, far too early to decipher what all of this means for Willis, the Jayhawks or the 2015 season. But it’s definitely good news.

It sounds as if Willis has emerged as a bit of a leader of the quarterbacks this summer. Keep in mind he still is a young guy going through his first summer workout with a college program, but there’s no mistaking the fact he has been pushing guys.

Now, to be fair, it’s worth noting Cozart spends most of the conditioning drills running with wideouts and defensive backs because he, too, needs to be pushed. But, with Cummings out and Cozart out of the way, that has opened the door for another QB to step up, and Willis has not wasted any time doing so.

Because he committed as a Charlie Weis recruit and, frankly, because he routinely was tough to reach during the recruiting process, Willis has been much less talked about than KU’s other quarterbacks. But the QB competition is still wide-open at this point, and if Willis continues to impress in the coming months the way he did in June, he quickly could become a familiar face in the race.

He’s not just a pocket passer who stands back there and throws. He can run. He can move around. And he loves to compete.

Willis may not be as dynamic as most quarterbacks you see in the Big 12 Conference, but he is deceptive. And, in football, especially at a place like Kansas, sometimes deception can be as important as anything.

Nice to know that there was some activity in FB at KU. I was wondering why no news on them, especially with FB season approaching. I love such articles, please give us more insight on personnel!

Quite frankly he is my favorite due to being from Kansas. I root for local guys. It will be a great competition. Cozart has a head start on Willis and Stanley, but they seem to be very talented and committed to winning the position.

Why was Willis "routinely was tough to reach during the recruiting process?"

Good question. But you'd have to ask him. He never returned messages I sent to him on Facebook, Twitter, etc. and I could never track down his number. It happens. And a lot of kids are that way. Just a bit disappointing with him being so close to Lawrence to begin with…

Is this kid a hidden gem like Chip hileary?