Kansas guard Frank Mason III (0) raises up his hands after a lob pass to orward Cliff Alexander (2) for a dunk during the first half, Tuesday, Jan. 13, 2015 at Allen Fieldhouse. 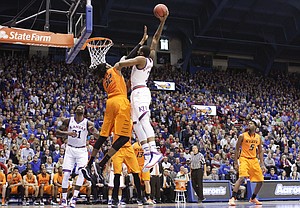 Taking Oklahoma State star Marcus Smart out of the equation did nothing to temper the intensity of the showdown between Oklahoma State and Kansas during Tuesday's game at Allen Fieldhouse.

Complete with a handful of technicals, hard fouls and even a few flops, the Jayhawks (14-2 overall, 3-0 Big 12) picked up a hard-fought, 67-57 victory over the Cowboys to stay perfect in conference play.

As people have come to expect, Frank Mason III again turned in a solid all-around performance, leading the way with 16 points and a game-high 9 rebounds.

Mason joined Kelly Oubre Jr. (14 points, 6 rebounds) and Cliff Alexander (7 points, 5 rebounds) to help KU survive a hot start from OSU guard Phil Forte and take a 32-28 lead into halftime. Forte had a game-high 16 points at the break but attempted just two shots in the second half and was held to two second-half points while dealing with a couple of different injuries.

After an intensity-filled first half, the second half turned into a glorified free-throw shooting contest as both teams jumped into the bonus early and the teams combined to shoot 36 free throws in the final 20 minutes.

• The game turned when: Double technical fouls were called on Jamari Traylor and Le'Bryan Nash around the 12-minute mark of the first half. The exchange near the KU bench was the height of the intensity in this one and the Jayhawks, backed by the home crowd, responded to the mix-up with a 9-0 run that gave them a small cushion to work with the rest of the way.

• Offensive highlight: With 13:50 to play in the first half and tensions running high to begin with, Alexander flicked a match onto the open flame that was Allen Fieldhouse with a vicious one-handed and-one dunk over Oklahoma State's Anthony Allen. With the fieldhouse going crazy behind him, Alexander flexed and stared down the Oklahoma State bench, which drew a technical foul. The extra-curricular activities did nothing to take away from the fantastic basket and tough-as-nails finish.

• Defensive highlight: Inside the final three minutes of the first half, Wayne Selden Jr. attacked the rim looking to make a play and, once again, came up empty. The hard drive to the rim was smart but the shot he threw up after going into the air left many people scratching their heads. Selden was not one of them. Instead of sulking over another missed opportunity in close, the sophomore guard hustled down to the other end and came up with a big-time block off the backboard that led to an alley-oop from Mason to Alexander in transition on the other end.

• Key stat: The Jayhawks did themselves no favors at the free-throw line. On a night when the home team was sent to the charity stripe a whopping 46 times, KU made just 32, good for 69.6 percent. Luckily for the Jayhawks, their field goal defense more than made up for the rough night at the line, as OSU connected on just 31.4 percent of its shots (16-of-51) in the loss.

• Up next: The Jayhawks will head out onto the road for another tough test at 8 p.m. Saturday, when they'll take on Iowa State in Ames. It's College Gameday at Hilton Coliseum so you can bet the Cyclones fans will be more than a little fired up for this one. 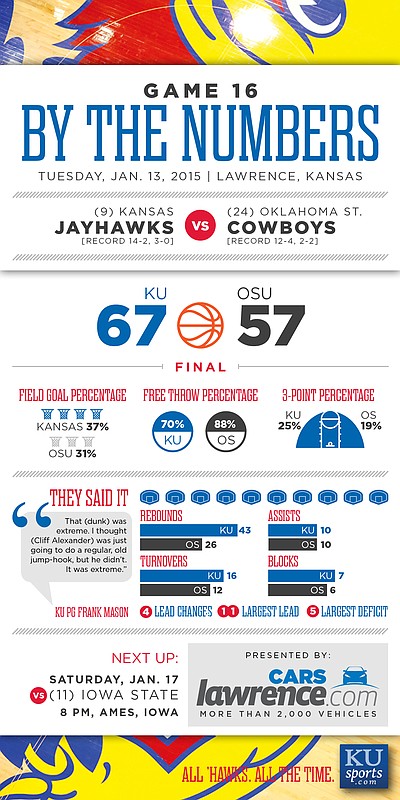