KU women hang on for hard-fought win over Texas Tech

In a game as rough and tough as Kansas University’s 71-67 victory over Texas Tech on Wednesday night at Allen Fieldhouse, one run, no matter how big or small, can wind up being the difference.

The difference between that game and Wednesday’s meeting, however, was that the road team did not prevail this time around.

“I thought the game was very similar to that one,” Texas Tech coach Candace Whitaker said.

During that Kansas run that proved to be the difference, Whitaker’s club went ice-cold from the floor. Tech (13-9, 3-7) missed nine straight shots during the dismal stretch and did not score its 54th point until the 3:45 mark of the game, and that came on a free throw. The Red Raiders finished the game by hitting just five of their final 17 shots, and KU coach Bonnie Henrickson said she preached defense, not offense, to her team during the timeout that followed Texas Tech taking its seven-point lead. 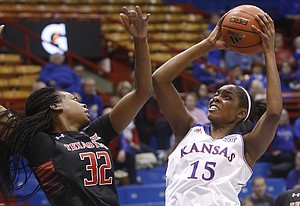 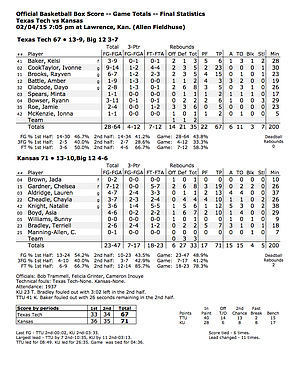 “They made a run, then we made a run, but it starts with the defensive intensity,” Henrickson said.

Senior forward Chelsea Gardner led KU with 19 points and eight rebounds. She scored nine of those during KU’s 16-0 run and even helped assist a Natalie Knight three-pointer by shielding Knight’s defender with her back.

However, had it not been for a play made by one of KU’s unlikely heroes, the run might never have come. Trailing 53-46 and watching another trip on the offensive end nearly go by the wayside, senior forward Bunny Williams ripped down an offensive rebound and kicked it out to Chayla Cheadle, who drained a three-pointer to get the run started.

Henrickson said those were the kinds of plays that never wind up in the newspaper, but both Gardner and senior Asia Boyd (10 points, seven rebounds) said plays like that never go unnoticed in the KU locker room.

“They make it a priority to point out those kinds of plays a lot,” Boyd said. “So we definitely noticed.”

Added Gardner: “I think it was a big momentum play, too. Offensive kick-out. That was good.”

Other than one block and a nine in her minutes-played column, the offensive rebound and assist were the only stats Williams recorded all night.

For a team that’s so used to relying on Gardner to be its everything inside, the unexpected contribution turned out to be enormous.

That certainly was the case Wednesday night, as four other Jayhawks joined Gardner in double figures to help KU win its fourth Big 12 game in its past five outings after opening conference play with five straight losses.

“When we asked ourselves those questions three weeks ago, we didn’t like the answer,” Henrickson said. “That answer has changed now.”

The debacle at KSU keeps KU from being 5-5 and tied for 3rd. We played Baylor to the end both times. Our schedule is favorable. Big 12-2 not very strong as it has been!