UC Irvine’s Mamadou Ndiaye, reacts to a play against Louisville in the NCAA tournament last March. The 7-6 Ndiaye will lead the Anteaters into Allen Fieldhouse Tuesday to face Kansas University.

Kansas University’s basketball players and coaches, who today host their annual holiday hoops clinic in Allen Fieldhouse, will also begin preparations for a (10-4) UC Irvine team that visits for an 8 p.m., battle on Tuesday.

The Anteaters, who were picked to place first in the Big West Conference in a vote of league coaches, scared Louisville before falling, 57-55, in a second-round NCAA Tournament game last March in Seattle.

Ndiaye, who happens to be the tallest player in the country with a wingspan of 8-foot-1, averages a team-leading 12.4 points off 67.7 percent shooting (65 baskets in 96 attempts) and 7.3 rebounds. He has 40 blocked shots.

How’s this for height?

Ndiaye’s presence should cause quite a stir in the fieldhouse on Tuesday.

“I thought he was 8-feet tall,” Louisville coach Rick Pitino told SI.com after last year’s tourney game in which Ndiaye had 12 points. “On film sometimes he doesn’t look as good. But a coach from their league told me, ‘Pay no attention to what you see on film because he protects the basket as well as anybody. So don’t think you can attack him laterally,’’’ Pitino added.

S.I. reports that after arriving in the U.S. five years ago, Ndiaye suffered from severe headaches and rapidly declining vision.

“Eventually he was diagnosed with a benign pituitary tumor, which had caused his excessive growth in addition to the medical problems and it took two surgeries to correct the problem,” S.I. reported. “When he said after practice on Thursday that he was ‘happy to be here,’ it wasn’t entirely clear at first whether he was referring to being in the NCAA tournament, in the U.S., at Irvine, or among the living. ‘All of those things,’’’ Ndiaye added to SI.com. 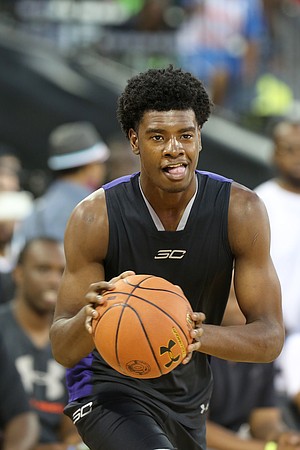 Jackson recruitment: Detroit radio talk show host Rico Beard caused shockwaves in the recruiting world on Dec. 22 when he reported that the country’s No. 1 prospect, Josh Jackson, said he was “down to two schools,” those schools being Michigan State and Arizona.

The 6-foot-7 shooting guard from Prolific Prep in Napa, California (originally from Detroit) who was in the stands for the Spartans’ overtime win over Oakland on Tuesday in Auburn Hills, Michigan, has also had KU, Maryland, UCLA and UNLV on his list and in fact has a visit scheduled to KU for the Texas game on Jan. 23.

Jackson’s AAU team, 1 Nation Elite Sports, followed Beard’s report with a Tweet indicating, “the recruitment of Josh Jackson has not been finalized.”

A followup 1 Nation Tweet read: “The news reported (in Detroit papers as well) is all a hoax! 1Nation is the official place for info regarding Josh Jackson’s recruitment!”

Michigan media figure to provide updates on Jackson’s recruitment Monday and Tuesday when Prolific Prep competes in the Throwdown in Motown in Dearborn Heights, Michigan.

According to btpowerhouse.com “Jackson is friends with two current members of Michigan State’s 2016 recruiting class, Miles Bridges and Cassius Winston. Bridges is a rated as a 5-star combo forward and Winston is a 4-star point guard. Also heading to East Lansing next season are 4-star center Nick Ward and 5-star shooting guard Josh Langford. If Jackson decides to stay in his home state and pick the Spartans, Michigan State’s recruiting class would rise to the quantity and quality of talent typically only achieved by Kentucky and Duke.”

Draftexpress.com lists Jackson the No. 3 pick in the 2017 NBA Draft.

Toronto native R.J. Barrett a 6-6 freshman guard from Montverde Academy in Florida, made the all-tournament team at last week’s City of Palms Classic in Fort Myers, Florida. He averaged 19.8 points, 6.0 rebounds and 4.0 assists in four games. He had 31 points in his squad’s only loss at the tourney.

Barrett’s dad, Rowan, is a former player on Canada’s National Team out of St. John’s. R.J.’s godfather is former NBA great Steve Nash. Rowan told USA Today that he sent to his son to the U.S., because of the fact “other Canadians such as Andrew Wiggins have thrived with elite U.S. high school programs.”

“When he left, I felt like I lost both my arms and my legs,” Rowan told USA Today. “It was a challenge. At the same time, I have to understand this is a normal thing at the higher levels of basketball. … At his age, he has to continue to work on everything. In my house, you haven’t done anything when you’re 15. I really like what I see in him at Montverde. They’re not giving him too much too soon because that can crush an athlete.”

“The kid is a special talent and will be offered by everyone,” one Division 1 assistant told Zagsblog.com.

How about sending Diallo & Bragg to counter the tall-order attack from West coast? I am 100% agree with this guy's post here: http://kubuckets.com/topic/3895/macro-vs-micro-myopia-and-feelings/2. We've seen enough what Traylor is capable of doing. His hustle plays earn him major minutes. Great. Now, let's see what our more athletic & more poised offensively freshmen can LEARN from each game.

Thanks for the link, Steve. This is what I've said several times before being labeled as a "Jamari hater" and "chicken little" reader, which of course I am neither. You can't consider the possibility of Bill not being perfect on this site without someone bringing up his accomplishments. HEM did a great job of making his points.

Disagree with the article. I might have been persuaded if he had actually made the case for DIallo and Bragg by their play instead of solely banking on the idea that handing more playing time equates to improvement. Diallo still looks not quite sure of himself on the court, which is OK against lesser competition because he has the physical tools to overcome it. Knowing where you need to be isn't something that demands game time, it demands demonstration in practice. Bragg has a stronger case. If the article had noted Bragg's assist/points/ defensive rating per minute played or something to that effect, I would buy the Self just loves the other guy more, story. Instead he just cherry picks quotes to state why he wants the Freshman out there instead of actually making an argument FOR the Freshman. It amazes me how often people want to claim this is the "entitlement generation" but want to suspend "earning it" for the hypothesis of unrealized potential.

First, Steve/Sam, thanks for the comments. Steve, you are right on point. We know JT's limitations. And Sam, folks that don't want discussion will label folks "haters." The reality is, Bill Self made a huge admission about 10 days ago -- that he tried to make last year's team into something it wasn't. That simple admission validates his critics last season. He also agreed that this year's team should more threes and play to its strength (shooting) -- again, a clear contradiction on how he handled last year's team.

Travis - There is an excellent per minute stat that helps define the total value of the player, based on a compilation of statistics -- it's the Player Efficiency Rating, or PER. Like all stats, it's not perfect. But it is a very large piece of the puzzle. It's a great stat for overall "net" production and value. Again, nothing is perfection. But it does tend to meet with the eye test nearly all of the time.

This season, both Diallo and Bragg have far superior PERs than Traylor. With the PER, the bigger the sample, the more reliable. We have a clear book on Traylor as his PER has always been inferior -- you can look at his prior seasons for that, too.

The thing here is that Traylor is not going to make vast improvement in year five. He is what he is. That's a reasonable assumption. He will have a very nice game, like he did against SDSU, but he will then have a number of net negative games. With Diallo and Bragg, one can reasonably assume that their best days are ahead of them. We just need to invest our game minutes more in their development -- the thing that gives them experience.

And I'm not "solely banking on the idea" that more playing time equates to improvement. It is a large part of getting comfortable both physically and mentally, and gaining the valuable experience that puts players in a position to play at their peak.

Also, Travis, whenever I use quotes, I'm always interested if there is something Self said to the contrary. I do make a concerted effort not to use a quote out of context or contrary to the entire thought process of the discussion. I think I have very fairly compiled the relevant discussion points.

Sounds like a game that Lucas will see planting of PT since he's the best blocking guys off the boards and going after the DRebs.

Oh, almost forgot about Lucas. :) Definitely, he will help us covering the D.

Ndiaye and Diallo can trash talk in French!

Should be an interesting game!

7'6" is one thing, but the dude is also 300. So many of those really long guys aren't particularly filled, and rather movable. This guy's more Shaq-esque.

The question to me is do you try to match his power, or counter with speed/stretch. Hunter might be a good option in that he does provide some height, but also has more ability to stretch the floor than Lucas. If Perry can make a couple 3's, that would really help stretch things as well.