Omaha, Neb. — All season, the Kansas University volleyball team believed it could compete at the highest level and hoped that this would be the year that the Jayhawks crashed the party and played on the same stage as some of the game’s perennial powerhouses.

Thursday night, the dream came true, as the Jayhawks played in front of a record crowd in a Final Four that featured Minnesota, Texas and Nebraska, programs that have become known for playing and winning at the highest level.

While Thursday’s semifinal match did not go well for the new kids on the block — KU lost to No. 4 Nebraska in four sets to finish the season 30-3 — head coach Ray Bechard said the entire week was an experience no one would soon forget.

There were no long faces, teary eyes or sighs of serious disappointment on the podium following Thursday’s loss. Sure, the Jayhawks would’ve preferred to have won and also would’ve liked to have played better. But they left CenturyLink Center with their heads held high after a fantastic season that ended with KU fighting to the end.

“I couldn’t be more proud to be represented with this group and the work we got done,” Bechard said. “I guess we can say the three losses we had were to the teams playing for the national championship (Texas and Nebraska, Saturday night).” 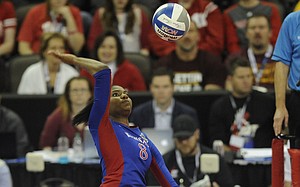 KU right side hitter sophomore Kelsie Payne (8) looks for a kill against Nebraska on Thursday December 17, 2015 as Nebraska outlasted the Jayhawks 3-1.

Playing on the biggest stage of her young career, Kansas All-American Kelsie Payne delivered a monster night and left quite an impression on the Nebraska Cornhuskers.

Her 22 kills on 33 swings, though spread out over four sets, all forced NU coach John Cook to shake his head and marvel at the 6-foot-3 sophomore’s incredible ability.

“I almost felt like telling our team, ‘Just go for an ace when Payne’s in the front row,’” Cook said. “Because we couldn’t stop her.”

Stop her they didn’t. But the Huskers were pleased that they were at least able to keep her from running them out of the gym.

“She’s tall, she’s big, she’s physical and she sometimes hits over the block,” said NU’s Kadie Rolfzen of Payne. “She’s a good player, she’s gonna get her kills here and there and we started touching some of her balls tonight and we were able to slow her down a little bit.” 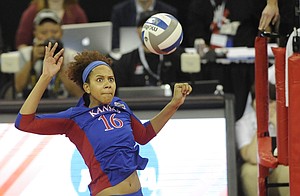 After the victory, NU coach John Cook, an old friend and former Big 12 foe of the Jayhawks, could not say enough about Kansas and the team Bechard has put together during the past few seasons.

“Just a great Final Four match,” Cook said. “I think we got ‘em the first game because of the crowd and the atmosphere, but, man, they started playing really well. They were a lot better in person than they were on tape last week. I feel very fortunate. We had to play some great volleyball to win that match tonight.”

Although he was more than happy to talk about his team advancing to face another former Big 12 foe — Texas on Saturday night — Cook sounded like a coach who believed Kansas would be back competing for a national title in the future.

“I’m very impressed with Kansas,” Cook added. “I’ve coached against Kansas a lot and he’s got a great team.”

Nebraska's win kept alive one of the craziest streaks in all of sports. Nebraska now owns an all-time record of 87-0-1 over Kansas.... KU's Tayler Soucie, Ainise Havili and Janae Hall teamed to finish second with eight kills apiece.... Usually reliable outside hitters Madison Rigdon (-.071) and Tiana Dockery (-.179) were the only two Jayhawks to finish with negative attack percentages on Thursday night.... Libero Cassie Wait led KU with 23 digs and Rigdon (10) also reached double digits.... The time of the match was 2 hours and 3 minutes.... Officials were Brian Hemelgarn and Michelle Prater.

The Huskers were impressive. I'll be shocked if Nebraska doesn't handle Texas in 3 or 4 sets. Payne was the only Jayhawk who could get anything going offensively and KU was still competitive. That's a huge credit to Kansas, which was simply overpowered and undersized compared to Nebraska.

Congratulations to all involved with the volleyball program. What an awesome season!

I've got just one thing to say to the ladies who lost last night...YOU GIRLS ARE TOUGH!!!! It was awesome to watch you play and I feel so lucky to have been able to watch the game vs. USC. I was in a hotel room on the east coast, so I had to jump up & down with a silent scream when you won that won. Would have had to do that again last night! Great season, great wins, great ladies, super proud of our Lady Jayhawks!!!

FUN. TO. WATCH.!! Great season...I am sure that it hurt last night to lose, but when it sinks in, relish the fact that the only 2 teams to beat you this year are playing for the National Championship....Not too many teams that can say that....IN ANY SPORT!! RCJH!

The three matches you lost were against the two teams playing for the championship! Very impressive. Congratulations Jayhawk volleyball team!

Let's not forget AD Zenger when accolades are being handed out. He could have decided to replace Bechard with "his coach". He showed patience and gave Bechard the support to succeed.

KU is one of only 28 schools who's athletic dept generates over $100 Mil according to a recent CBS article. Considering that Kansas competes in fewer sports than nearly any Power 5 school and that football, the big $$ sport is, in a lull, at Kansas. It's a remarkable feat.

Zenger is a great AD.

Zenger hired Charlie Weis and almost destroyed the football program while doing it. He may earn the term great at some point in his career, but he hasn't earned it yet.

Who would you have hired instead of the Tuna?

Charlie Weis is not the Tuna. Bill Parcels is the Tuna. Though it is understandable to mistake the two because rarely do two consecutive sentences come out of Charlie Weis' mouth that don't mention Bill Parcels, Bill Belichick or Tom Brady.

No doubt Bechard was on a relative hot seat when Zenger came on board in 2011. The volleyball team had been mediocre -at best- for several years under Bechard. To fire Bechard after the 2011 season would have been right about the same time Turner Gill was collecting his severance pay. I'm not sure that's something any AD wants to deal with in year one of his or her tenure -- replacing two head coaches, one of whom had experienced at least some relative success.

Bonnie didn't do better. Bechard did. I think he handled both perfectly. The Tuna.....Who would you have hired?

You're missing my point. What was Zenger to do in year one of his tenure? Fire all of the coaches who had experienced only mediocre levels of success? No way he's going to do that on the heels of firing Gill.

Clearly he made the right choice in not firing Bechard. But did he really have much of a choice?

He could have done any number of things. He helped Bechard reach heights that he hadn't before. He's build KU athletic revenue to over $100 million. Many bigger schools with far more sports aren't. Many other KU teams have shown huge growth. Ladies track has won a National Championship. That's my point.

I'm pleased with the job Zenger is doing. I will reserve ultimate judgement, however, until Beaty has had a few years to establish his status as an HC.

If you're going to give him heaps of praise for not firing Bechard, then you should be willing to recognize he deserves at least his fair share of blame for the Weis debacle.

He swung for the fences. It didn't work out.

Joe, I agree that Zenger has been okay. You can look at Rock Chalk Park as a win, though I believe it should have been placed at Shenk Fields. The Track NC had really nothing to do with him. I do believe he should get credit for upping the competitiveness of the non-rev sports, including Volleyball, but we still have a long way to go in that area. To me, the bar is easy to identify: top-third in-conference, in all sports on an annual basis.

He has two major, major misses in my book that will take him quite awhile to overcome. First, Weis. If Beaty isn't winning in 4 years, we'll have a new A.D. Second, the court-storming at KSU and his tepid, almost apologetic reply on behalf of the purple pussycats. For me, it will take a long, long time and a lot of achievements to get over the fact that he was not way more vocal and forceful in that matter.

I think that Texas beats the Huskers. Having the semi-final game in the arena against Minnesota will have helped them to adapt to the setting. The crowd will be huge and loud, but I think that Texas - and the Big 12 - wins this year's NCAA Championship.

Did you watch the semi? There were more people at an average Walmart.I don't know what that helped them adapt to.

I sure hope they are holding their heads "up high." After all, they are one of the four very best volleyball teams in the entire country! Wow! I am so proud of them! I have not really followed volleyball but my wife and I watched the semifinals win over UCLA and were hooked. We're 1500 miles from the KU campus so there is no way we can attend the games but sure would if we could. Not only are they winners but they are outstanding ambassadors for the University of Kansas.

And to repeat what's already been stated, KU's only losses this year came to the two teams playing for the championship. To quote Adam Sandler: Not too shabby.

Outstanding Season Ladies, so very proud. Thought you played tons better in the 3rd set, reduced the service sets, those killed us in the 1st two sets 7 service errrors and NEB 3 ace's but still outstanding season and a really bright future, you did fine, great season. ROCK CHALK ALL DAY LONG BABY