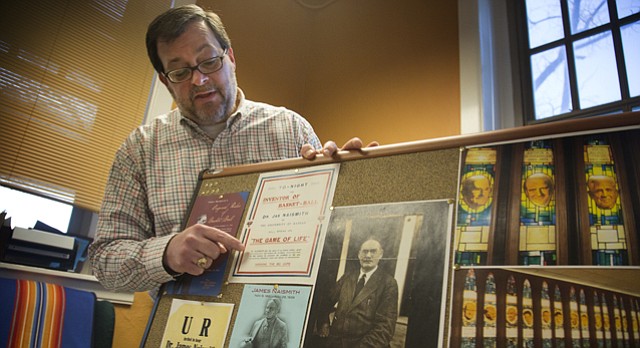 Michael Zogry, KU associate professor in the department of religious studies, who discovered the only known audio recording of James Naismith, talks about some of the many items in his Naismith collection.

In an audio recording, long-buried among countless others in Library of Congress archives, an animated 1930s radio announcer asks, “Dr. Naismith, how did you happen to invent basketball?”

What follows is just more than two minutes of the only known recording of the voice of James Naismith himself — inventor of basketball and former Kansas University basketball coach — explaining how the game was born during an 1891 blizzard, when his students at Springfield College in Massachusetts were stuck inside needing something to do.

The chaos of that experimental first game, according to Naismith, inspired the 13 original “Rules of Basket Ball” that he ultimately put to paper.

“The boys began tackling, kicking and punching in the clinches,” Naismith said. “They ended up in a free-for-all in the middle of the gym floor. Before I could pull them apart one boy was knocked out, several of them had black eyes and one had a dislocated shoulder...so I made up some more rules. The most important one was that there should be no running with the ball.”

Michael Zogry, associate professor in KU’s department of religious studies, discovered the audio clip while researching for his book in progress, “Religion and Basketball: Naismith’s Game.”

Naismith’s voice is now available for all to hear online, via the KU Libraries website.

The interview with Naismith was broadcast Jan. 31, 1939, on the radio program “We the People.” In the clip, radio host Gabriel Heatter said Naismith had traveled from Lawrence to New York City to watch a “giant basketball double-header” at Madison Square Garden.

“In that cheering crowd, sitting in row C, seat 11, will be a modest 77-year-old man,” Heatter said. “Those fans won’t know that he made possible the game they’re watching, but you’re going to meet him now.”

Zogry said he was thrilled to find the clip, which he called a piece of Naismith’s legacy that was “lost to history.”

“The version of events that he gives is different from the published versions, so it adds new information to the process of creating the game,” Zogry said. “There’s also value in just hearing his voice... when we hear him talking we get a sense of his demeanor and his self-effacing attitude.”

The research path that led to Zogry’s discovery of the audio file was rugged.

Zogry said he’s always been interested in the concept of sport and religion, plus he has ties to two Naismith towns. His parents grew up in Springfield, Mass., where he visited the Naismith Memorial Basketball Hall of Fame as a child. And working at KU, of course, Naismith history is everywhere.

Zogry said he first saw a reference to the radio interview in a biography by Bernice Larson Webb, “The Basketball Man: James Naismith.”

He’d hit dead ends tracking down other audio recordings he’d found references to, but with help from his research assistant Katie Hobson, a master’s student in religious studies at KU, Zogry eventually discovered that the Library of Congress had complete runs of the radio program.

After determining the Library of Congress had the Naismith interview, it would be about four more months before Zogry actually heard it himself. He and Hobson worked to verify it was, in fact, Naismith speaking. They contacted the company that donated the WOR-AM archives to the Library of Congress and had rights to the audio, then went through the process of ordering a copy and getting permission to use it, including sharing it online.

Zogry said the radio station first saved programs on lacquered discs but that they were eventually translated into digital format.

Only after going through the months of research and hoops was Zogry actually able to listen to the recording, when the Library of Congress shared the digital file with him in early November.

One of the first people Zogry played it for was Jim Naismith, a grandson of James Naismith whom Zogry befriended several years ago.

Jim Naismith and his wife, Beverly, of Portland, Texas, traveled to Lawrence and heard the recording while visiting Zogry’s home for dinner.

It was the first time Jim Naismith had heard his grandfather’s voice — the son of Naismith’s youngest child, he’d only met him in person when he was too young to remember, Jim Naismith said. 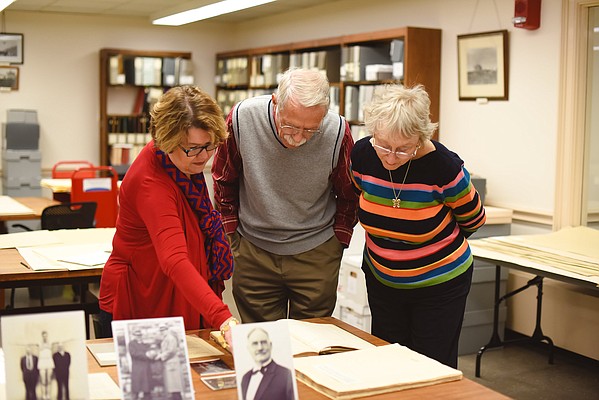 Kansas University Archivist Rebecca Schulte (left), Jim Naismith and his wife, Beverly Naismith, look over James Naismith items at KU's Spencer Research Library during a visit by the Naismith's to Lawrence. Jim Naismith of Portland, Texas, is the grandson of James Naismith, inventor of basketball and a former KU basketball coach and athletics director.

Jim Naismith said he’d seen silent movies of the basketball coach and read all kinds of stories about him.

“When I saw him moving, I could see my dad,” he said. “That was important to me. Well, the voice was another one of those pieces.”

Jim Naismith said the voice didn’t sound much like his dad’s but he liked the fact that it was bold and chipper. He said he also laughed at the colorful account of the first game.

James Naismith worked at KU for roughly 40 years, according to the university.

KU hired him in 1898 as chapel director, director of physical education and university physician, according to KU. He coached the KU basketball team from 1899 to 1907, and also became KU’s first athletic director.

Naismith died in November 1939 and is buried at Memorial Park Cemetery in Lawrence.

His original “Rules of Basket Ball” — complete with the no-running rule inspired by the game alluded to in the newly discovered audio clip — also have a permanent home in the works in Lawrence.

KU alumnus David Booth and his wife, Suzanne Booth, purchased the document at auction in 2010 for $4.3 million, a sports memorabilia record according to Sotheby’s in New York City.

KU currently is constructing the DeBruce Center, connected to Allen Fieldhouse, to house the rules. It’s expected to open in 2016.

Pretty cool stuff. Nice work and something which I'm sure will be a fixture in the new DeBruce Center. Amazing to me how many people, even here in Oklahoma where we live do not know who Dr. Naismith was, that he was KU''s first coach, and that he invented the game. They are also surprised when I tell them the school has only had 8 coaches in its history.

Nice writing Sara Shepherd and thanks.

One dude gets cold cocked and another gets a separated shoulder. Dr. Naismith thinks, well that didn't work we just moved the fight from the hallways to the gymnasium.

Then the guys beg him to let them play again. Lol

Flash forward to the present without the rule changes. KU wins recruiting battle thanks to assistant coach Don King and signs punching guard Mike Tyson out of Brooklyn. Raw talent from Ukraine, Svi Klischko, with great scrum instincts, is having his high school transcripts reviewed by the WBC.

Boys will be boys.

I have a letter dated 12/9/37 on KU athletic department stationary addressed to "Jim" signed by James Naismith. It asks Jim (his son) to help my dad, Clyde Moore, find a job.

I found it in some things my dad had stored away. It is now framed and hanging on my wall.

The date of the letter is about two years before Mr. Naismith died and I was born.

Dan Patrick played the audio clip on his show this morning.

Congratulations, Don. What a keepsake! Enjoy it with pride.

Wow, just...wow. Hearing the voice of Dr. Naismith himself was...words cannot adequately describe what I felt hearing it. A shiver went down my spine.