San Diego — Left for dead yet again, the remarkable Kansas University women’s volleyball team had one more comeback in it, and — miracle of miracles — the Jayhawks are headed to the Final Four for the first time in school history.

They knocked off top-seeded USC by scoring the final six points of a dramatic five-set victory.

After winning the first two sets and losing the next two when national player of the year Samantha Bricio began to dominate, Kansas rebounded from deficits of 5-1 and 13-9 to pull off the amazing comeback, winning when Madison Rigdon’s bullet hit the floor and triggered an on-court celebration. 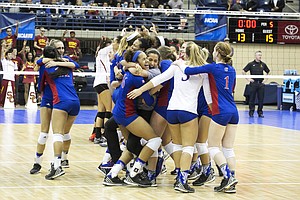 As had happened in a four-set regional semifinal victory against Loyola Marymount, Kansas left its magic in the locker room during intermission after winning the first two sets.

USC took a 12-3 lead into a timeout in the third set, when the Jayhawks showed yet again that they are every bit as hard to kill as they are talented.

With Ainise Havili working her magic, most cleverly with a back-hand tap that softly cleared the net and barely made a sound as it hit the floor for KU’s ninth point, KU stormed back into the set with an 11-3 run. It was the first of four times the Jayhawks drew within a point without tying it. Finally they tied the score at 19, but the Trojans with Bricio heating up took the set by scoring three of the final four points.

Kansas lost the set, but as it had in winning the first two sets, showed it considered itself nothing less than USC’s equal.

The KU volleyball team will return to Lawrence at approximately 5 p.m. Sunday and fans are encouraged to show up to Horejsi Family Athletics Center then to welcome the team back after its huge weekend in San Diego.

Payne, set beautifully by Havili, contributed her first kill during a first set in which Havili contributed her normal array of perfectly placed sets, and as she almost always does, also picked up a soft kill by deceptively finding the open spot on the floor.

Havili’s family members, more than two dozen of them, were easy to spot in the crowd. They wore identical black T-shirts with KANSAS across the chest in white letters and VOLLEYBALL underneath it in red letters. The Jayhawk is holding the Tongan flag, native country of Havili’s parents. Her mother’s family members came to San Diego from Texas, her father’s relatives from San Francisco. They all brought an abundance of spirit.

Blessed with an uncanny knack for knowing precisely where and when to put a pass for an attacking teammate, Havili gave relatives plenty about which to go wild.

The previous night, Creighton had taken the first set from USC, so when the Trojans jumped to a 6-2 lead in the second set, those in the arena unfamiliar with the Jayhawks’ ability to respond to adversity with a three-word mantra — “focus and fight” — shared by senior Tiana Dockery, probably figured it would be all Trojans for the rest of the night.

Two sets in, Kansas had done such a good job of not leaving open spots on floor and handling hot attacks that USC’s hitting percentages were .026 and .094 in advance of intermission. At that point, Kansas did not look at all intimidated by either the mighty Trojans or the reality that a Final Four berth was at stake.

The Jayhawks fueled up for the match four hours before the start, as is customary for most sports, and dined at the team hotel on chicken, shrimp, vegetables and roasted potatoes.

Nothing about the way they strolled to the team bus suggested this was a group of young women about to play the biggest match in their school’s history and their lives. They looked the same as always, which is to say loose, quietly confident, thoroughly enjoying each other’s company.

TV finally gave the go-ahead for the match to start, at 10:37 p.m. Central, after a few minutes of standing around on the court waiting for the green light. More of the same quiet confidence, composure and togetherness was on display once the ball started flying back and forth across the net.

— Stay logged on to KUsports.com for more on the historic match, including reaction from the Jayhawks in San Diego.

What an amazing victory. These ladies looked finished midway through set 5 and came roaring back to defeat the number one seed. Greatest team in Jayhawk history! So proud of this team! On our way to Omaha!!!

I thought we were finished when in the fourth set USC jumped out to another big lead. Just felt like they were flexing their muscle, and that Kansas had "skated by" in the first couple of sets but now were getting the real Trojans. When they jumped out again in the 5th set, I almost turned it off.

Glad I didnt. It was a thrilling finish!

Unreal comeback in the match and the 5th set! Wild finish. They never gave up and scored the last 6 points!

How cool is that?! Congratulations! Final Four! Go ladies. Might as well win it all.

The crazy thing is that they were far from playing their best! Granted, neither was USC.

Why not just win it all indeed!

Great Job ladies. Only team not from the top 4.

Proud of you, #kuvball! Great accomplishment so far! Not close it out! We need that championship!

What word(s) could be used to describe how exciting this is that isn't a cliche?

And for USC to be two points from the win, and have the Jayhawks win six straight? I'll go McEnroe: "You cannot be serious!".

My goodness KU volleyball, you are friggin' incredible! Can't congratulate you enough, so I'm "thumbs-upping" every comment on this thread.

Congrats. Looks like a fun road trip for my family up to Omaha and support our Jayhawks in the Final Four. Keep focused and let's do this. Rock Chalk.

Glad you'll be there, Dee. I'm sure the crowd will be overwhelming, but with this team, anything is possible. And as Waylon suggests below, it seems like destiny that KU gets another shot at UT for the title!

I'm not sure how tickets work for the Final Four, but let's hope that the Horesji faithful can somehow all get there. It will at least bring a little home-cooking to the table to counter-balance the corn eaters.

was talking with another individual Brett and we both thought it should be like any other NCAA event, Each School should be allotted so many then the rest be put on sale

Truly amazing! Nebraksa no easy feat but how crazy it be if Texas and KU meet and KU gets the win on biggest stage there is?

OH, I'm not worthy, I'm not worthy. please forgive me, me being the ol Negative Nellie that I can be lol it was terrible, there I was ranting, and raving, cursing, yelling at the TV, just thank GOD these ladies are not like me. What an AWSOME response, this team never gave up, I got really upset I mean we were giving up 6-7-8 pt runs and I was telling the ladies you CAN'T do that against the nu 1 seed in the tourney. I guess I thought they could actually hear me through the TV I have been following the ladies over the last few years, finally getting things figured out, there are a couple of things I still don't quite understand but it's ok I reckon I will in time.I still can't figure out when a team makes a hot on the ball and we block it and it goes out of bounds then why the other team gets the point, that's just my ol lil pead brain not understanding. What a GREAT JOB Ladies you have made us so proud, you have done something that's never been done, WELL since we are here we might as well WIN IT ALL just unbelievable this is one negative Nellie that's proud to eat crow, let me have it lol, ROCK CHALK ALL DAY LONG BABY way to go ladies

I had given up too, Gerry, although not quite in the way you did.

When it was 13-9, I was thinking about how proud I was of what they'd done and what a wonderful season it had been. I thought that even if they lost, it was still an unbelievable year. Little did I know that they'd pull one of the greatest feats in KU sports history. I still can't believe it!

What a wonderful testament to perseverance, hard work, discipline, and any other positive word you can think of. Hoo rah!

Thanks for the link Brett. Good stuff.

It's a rare night when you say Men's BB game was the 2nd most exciting sports event for the Jayhawk faithful.

I would agree. I hurt my elbow fist pumping on the final point. Unbelievable comeback.

...can you imagine what our men's basketball team would be like if they brought the enthusiasm and effort on every play like our women's volleyball team?

If the gals meet Texas in the final it will be shades of 1988 men's basketball. And we know what happened there.

I think it's time we back it up. They will be her at 5:00 there needs to be AWSOME showing of support for our ladies, let them know how proud we really are, let them know that we DO CARE and are proud and that they should be proud also. This team has a certain swagger to them, they have that look kinda like that they just don't panic- - -unkike myself, don't know how many trips I made to the bathroom was so nervous lol. Plus like my brother said, it's kind of sad and I know it's always the case with this paper but here we are last night our basket ball team plays and they win, which is always good, looking for big things this year, but they win which they were surpose to win, as that's what good teams do, but we win and like always 6-7 different story lines on the Basketball game. NOW our ladies, go out and do something that has NEVER been done at our school, they are making history at our school, first final four ever in Volley Ball, we just defeated the nu 1 team of the ENTIRE Volley Ball tourney in San Diego and we get 1 little news story, just feel the paper is slighting these girls, hopefully they will get a lot more of the credit they desire during the wek. we need to be REALLY REALLY proud of these ladies, this is HISTORY IN THE MAKING. Come on LJW give their print, let them feel like we care, the love that they deserve. ROCK CHALK ALL DAY LONG BABY

"They will be her at 5:00 there needs to be AWSOME showing of support for our ladies..."

Where is "here"? City? Location?

Hey, we've made the Final Four which is a program first, we beat a number 1 seeded USC team and Mizzou in the process....

From here on you're playing with house money. The pressure is off. These ladies can play with free minds.

Joe, at the Horejsi, Athletics center where they play their matches Hree in Lawrence