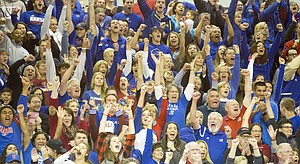 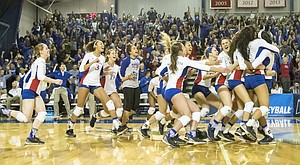 That was oh, soooo nice! Savor it, ladies!

P.S. Wow, just noticed Loyola Marymount is up 2 sets to zip over the #8 seed Stanford. Hmm.

Loyola has been historically good at Volleyball. They have a fine tradition there as far as Volleyball goes.

RCJHK! Congratulations to a terrific team. Just can't say enough about how you have elevated yourselves and this program. Thank you!

Awsome match ladies, keep it up. Survive and advance, looking forward to next weekend, I know you will do well been watching all year, we have a lot of weapons love them all, still pretty young yes Dockery is a Senior awesome player vicious hitter but I believe she will help carry us the rest of this season,BUT we have young too, we have THE PAIN TRAIN, awesome player, seems like she can get a kill just about any time she wants, We have Soucie, great blocker and kills, we have HALL complete player, then we have our setter Havili really amazing the sets she makes for her teammates on top of her little dunks keeps the defense on their toes, just never know when she is going to do that, we have Church, & Waite great players looking forward to next weekend ROCK CHALK ALL DAY LONG BABY

Times have changed... only one Mizzou hatred comment! Good to know that we have moved on.

Excellent. Exciting for these young ladies. Best hopes for them.

Still on a high from that game. The atmosphere was awesome. Still enough rivalry in the fanbases to make the reaction for every point huge. Loved the hearing "Rock Chalk / Jayhawk!" competing with "M-I-Z Z-O-U!" in the stands.

Talked to a few Mizzou fans after the game, and they said they missed this. I know I do.