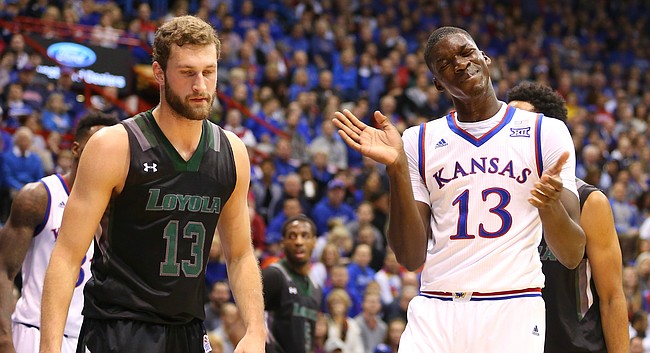 Kansas forward Cheick Diallo (13) reacts to losing a ball out of bounds during the first half, Tuesday, Dec. 1, 2015 at Allen Fieldhouse.

It was billed the Cheick Diallo show and the freshman who sat out the first five games of the 2015 season in a highly publicized battle with the NCAA for eligibility did not disappoint.

The freshman from Mali, Africa, was not exactly amazing, but he did enough to show what he can bring to this team. Beyond that, just having him in uniform and on the floor was enough to please the Allen Fieldhouse crowd during KU's 94-61 victory over Loyola.

Diallo checked in at the 12:57 mark of the first half and took a while to get going. He turned it over the first few times he touched the ball and did not really look comfortable until the second half. But he kept playing and working and eventually things started to come to him. 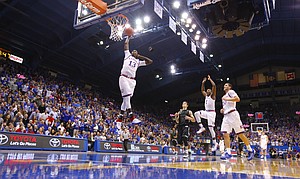 Diallo finished with 13 points on 6-of-8 shooting to go with 6 rebounds, 3 blocks and 4 fouls in 16 minutes. Diallo had a sequence midway through the second half in which he picked up six points in an eight-point KU spurt and also blocked a couple of shots. After his final block, Diallo exploded with joy and motioned to the crowd to get loud. They obliged and KU rolled. Diallo's energy made a clear impact and he checked out to a standing ovation at the 2:06 mark of the second half.

While Diallo was enjoying his debut, Perry Ellis (15), Wayne Selden Jr. (18) and Frank Mason III (10) all did what we've come to expect from them to make sure it was a good one. Sviatoslav Mykhailiuk also chipped in 10.

The Jayhawks, who looked sluggish at times, especially when compared to how sharp they looked last week in Maui, improved to 5-1 with the victory and dropped Loyola to 1-6.

• The game turned when: KU opened the second half with an 11-0 run that turned a 40-36 halftime lead that Bill Self surely was less than pleased about into a 51-36 run away. Seven minutes later KU led 59-39 and the rout was on. Ellis scored six points (including a three-pointer) during the run to open the second half and Selden and Devonte' Graham each added a bucket as well. Most of the run was fueled by KU turning it up on the defensive end. 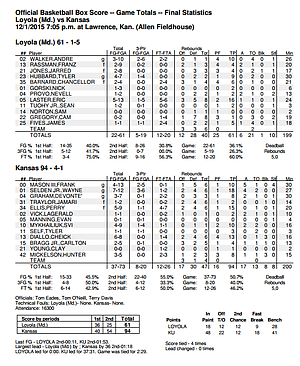 • Offensive highlight: With about 5 minutes left in the first half, Graham picked up a rebound and pushed the pace in transition. As Graham soared up the floor, Selden raced up the left wing while Graham kept pushing up the right side. As Graham made eye contact with Selden, who took off for the rim, the only Loyola man in the lane vacated the paint to cover the corner on Graham's side. That created an easy angle for the lob pass and an even easier finish for Selden, who rocked the rim to put KU up 29-23. Selden later jumped on the other end of the equation and made a sweet, behind-the-back dish to Diallo in traffic. Diallo did the rest finishing a two-handed flush to put Kansas up 55-37.

• Defensive highlight: You just knew it had to come from Diallo, didn't ya? With all due respect to the two-handed, volleyball style block that Carlton Bragg so easily secured in the game's opening minutes, the big block of the night came from Diallo midway through the first half. After catching it on the post and promptly turning it over on his first real touch of the night, Diallo raced down the floor to atone for his mistake and did so by rejecting a Loyola lay-up attempt out of bounds. This, of course, delighted the KU crowd and helped make up for the mistake on offense, which, no doubt, came from Diallo being just a little jittery about his first college basketball game in Allen Fieldhouse.

• Key stat: Free-throw shooting. Kansas was just 6-for-13 from the free throw line in the first half, a mark that more than allowed the Greyhounds from Loyola to hang around.

• Up next: The Jayhawks will be back on the Allen Fieldhouse floor at 2:15 p.m. Saturday, when they play host to Harvard. 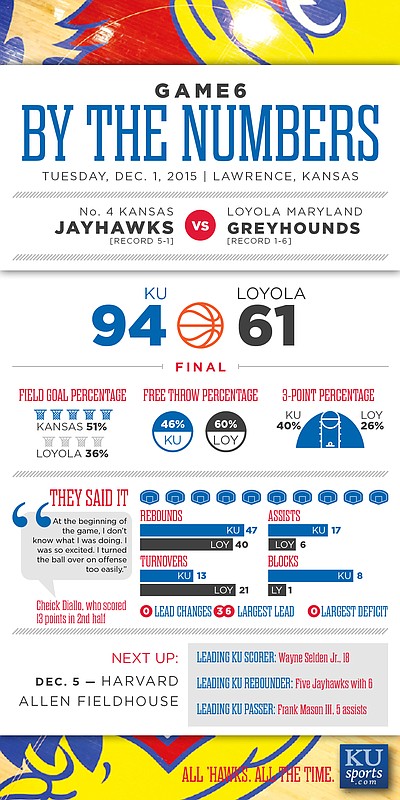 This team looks SOOOOOOOOOOOOOOO much more complete with Diallo on the floor. It's amazing how much more athletic he is than the rest of our big men and if hunter Mickelson can be consistent on the blocks with the scoring he did tonight I definitely think Kansas will be in the Final Four

4 fouls in 16 minutes. Can we write it off as opening night jitters?