From the time he arrived in Lawrence through the start of preseason camp, first-year Kansas University offensive line coach Zach Yenser made clear the details of his search for the five linemen who would work hard, play smart and not be afraid to battle their butts off.

A little more than a week before the opening game of the 2015 season, Yenser provided a candid look at the Jayhawks’ offensive line depth and spoke like a coach who was proud of the progress his big boys up front made from Day 1 to now.

“The five going (with the first team) right now have been pretty solid throughout camp,” Yenser said. “You can see it. Every day we trust each other a little bit more and we’re just gelling with each other. I think that’s a huge part. If you can stay consistent up front, that goes a long way.” 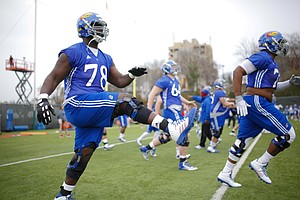 Kansas offensive lineman Larry Mazyck warms up with his teammates during spring practice on Tuesday, March 24, 2015.

Between them, that group has just 16 career starts and 36 game appearances, with Mazyck being, by far, the most experienced of the bunch, with nine starts and 12 appearances.

The second unit, which Yenser said had been nearly as impressive as the first in terms of buy-in, effort and improvement, features just one player with Div. I game experience. Sophomore center Joe Gibson played in eight games and started seven a season ago.

After that, the guys Yenser refers to as the “young pups” — freshman tackles Clyde McCaulley III and walk-on Larry Hughes — are new to the college game altogether, and guards Jayson Rhodes and Jacob Bragg have experience in the program but not on Saturdays.

Yenser said that juco transfer Will Smith, a guard, and walk-on freshman Mesa Ribordy, a tackle from Louisburg High, made up the 11th and 12th players on the O-Line depth chart and added that all 12 received enough work during the offseason to develop at a solid rate.

“Throughout camp, we had an A field and a B field and guys were getting 40 reps a day whether you were a true freshman or a fifth-year senior,” Yenser said. “It’s helped out tremendously, especially those two young tackles.”

Although he discovered the spots where his guys fit best, Yenser never has operated as a coach who let stereotypes dictate his depth chart.

“I reiterate to my guys all the time, ‘You’re football players. You’re not just a left guard, you’re not just a right tackle, you are a football player and you will play where you are needed,” he said. “If you have a problem with that, then you’re in the wrong room.’ You’re considered a selfish guy and we are unselfish men.”

The only requirement Yenser had for any of his positions — other than program staples solid work ethic, good attitude and hunger to improve — was at tackle, where he believes there’s one physical trait that trumps all.

“Really, you’re just looking for length,” he said. “At tackle, you want the guys to be, not necessary taller, just longer. Usually taller guys have longer arms, but that’s all you’re looking for at tackle. Jordan and Larry are both playing really well for us on the edge and getting better every day.”

Inside, Yenser said he loved the experience that Haughton and Peters bring and has been impressed by the way Banks changed his body and mind to earn his spot.

“There’s one thing you can’t coach,” Yenser said. “And that’s experience. There’s no doubt about it.”

By this time next year, all but three of these 12 figure to be returning veterans with solid experience. But it’s a green bunch today and how well they perform will be just as crucial to the new Air Raid offense’s success as anything junior quarterback Montell Cozart or offensive coordinator Rob Likens does in their roles.

Guys: play hungry, play angry, and--most of all--play well for 60 minutes. Put that disrespected chip on your shoulder and go out there with something to prove!