Head coach David Beaty talks with his team prior to a round of portraits with media members on Saturday, Aug. 8, 2015 at Memorial Stadium.

By now, roughly seven months into their time in Lawrence, the new Kansas University football coaches have figured out they are going to have to emphasize a bunch of little things if they hope to win games during the first year or two of the transition to head coach David Beaty.

Beaty set the tone for this philosophy and often has talked about emphasizing discipline, valuing possessions and obsessing over quality special teams.

While those things can be handled via film work and reps on the practice field, there’s one element that Beaty refers to as a “hidden area” that might be just as important to shaping this team.

“We always talk about practicing speed when nobody else does,” Beaty said during his 30-minute meeting with the media Saturday. “Most of the time, (when) you may walk, we try to jog or run or certainly walk fast. When we break a meeting in here, those guys don’t walk. We get out of this room really quick.” 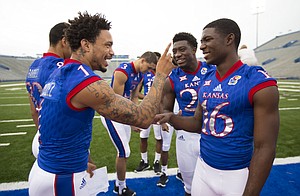 It’s not that Beaty believes the extra sprint from the back of the auditorium to the door will aid his players’ stamina — though it certainly doesn’t hurt — but more the mind-set behind it. No wasted time. Little wasted movement. Extreme focus on the task at hand.

“We’ll wait when we get there,” Beaty said. “But we’re gonna hurry to get there. We don’t allow them to get up slow and kind of mosey to the locker room.”

By not allow, Beaty means that literally. And the players know it. Consider the words of red-shirt junior Damani Mosby, a defensive end who has had as good of an offseason as any player on the roster, for proof.

First-year wide-receivers coach Klint Kubiak said this style was something Kevin Sumlin did at Texas A&M and current Texas Tech head coach Kliff Kingsbury lifted from him as well.

“For those guys to succeed in this offense, it’s gotta be a lifestyle for them,” Kubiak said. “The main thing is the workout more than anything. The way they work out fast, it helps them practice well.”

Beaty made sure to point out that most of the conditioning drills the team did with strength coach Je’Ney Jackson and his staff this summer were done with game day in mind.

“We weren’t just running suicides or up-and-back type stuff,” he said. “We were doing real football movement. Everything is a very tempo-based type of training.”

Kubiak said the payoff from that pace already had shown up during the first few days of preseason camp.

“Those receivers can go five reps in a row without getting gassed now,” Kubiak said. “Everything we’ve done these first two practices has been an extreme change from the spring.”

Although Beaty continued to say junior Montell Cozart had the inside track on the starting job this fall, the first-year KU coach sounded excited about every quarterback on his roster.

“I love that quarterback race right now,” Beaty said. “There are some talented guys there.”

Beaty said freshman Carter Stanley, because of his familiarity with this offense, and freshman Ryan Willis, because of his physical maturity, both were ahead of where true freshmen typically are at this time of year. And he said juco transfer Deondre Ford and TCU transfer Keaton Perry also both impressed him during the first couple days of practices, as well.

“It’s going to be a very interesting race,” Beaty said.

Because the coaching staff remains in evaluation mode, Beaty did not release an official depth chart on Saturday. But he did reveal that he runs practice with an A and a B field and clarified that the A field is where guys want to be.

While picking this year’s starting QB could go down to the final week of preseason camp, Beaty said that battle and others would be pared down in the coming weeks to make identifying the first-string players a little easier.

“You’ve gotta do it pretty quick for all the spots,” Beaty said. “You’d like them to start getting some cohesiveness. And, honestly, it’s really not that difficult. I tell my mom, ‘Mom, you really could do this because the cream rises to the top.’ When they’re competing, it’s very clear who is doing it and who’s not.”

Saturday’s media day wrapped up with a couple hundred KU fans being welcomed into Memorial Stadium to watch the Jayhawks run through a full practice, complete with drill work, team periods and individual sessions. Some of the highlights included the one-on-one battles between the wide receivers and the defensive backs. Fans also got to see all five quarterbacks in action. As expected, Cozart, last year’s opening-day starter, worked with the first string.

Following the practice, fans were invited onto the field to get autographs and pose for pictures with the KU players and coaching staff.

After an off day today, the Jayhawks will return to the practice fields Monday before working in full pads for the first time on Tuesday.

So we're so bad that now we have a "hidden area" and it's running out of meetings or to the locker room? Hey, last one out turn off the lights! First guy out of the gym gets a gold star or how about a lollipop! Sure maybe Sumlin employs this type of discipline at his practices but he's also dealing with a completely different talent pool. One where he needs to coax out that last little bit of talent. We don't have much talent. We need to work on building these players up and making them think they can compete at this level. I'm sure I'm gonna take some heat for it. I'm gonna cheer the hawks no matter what but pointing out glaring issues is something we as fans and you as a writer get to do. That's part of being a fan. And Matt I'm not criticizing your writing I'm just trying to wrap my head around what this staff is trying to do. Perhaps I'm looking at it all wrong because you can't change the culture once it's already established but I guess I just wanna see more. Here's to better days in the future. I wish this team nothing buy the best. Sorry for the puns but I'm trying to keep it light.

So I'll keep it simple and to the point glass half empty. They are leaving nothing unturned and no potential edge in how you go about your business left unnoticed. No more, no less. No need to over analyze it. And if you don't think they are building players up, your totally detached.

Ah the first hater comment. I'm not detached. I've hung on every word of Matt and anyone else that's posted on KU Football for the last 8 years (that's as long as I've been commenting and reading on this site). We've heard the very same thing with Gill. We heard it with Weis. And we heard it with Bowen. I'll give Bowen credit the players played for him. That said I'm not gonna sit back and watch while another coach comes in and says the same things all the others have said. Show me on the field. Show me in recruiting. And show me some intensity while you muddle through the first couple seasons. Show progress. We've yet to see any of that since Mangino left (and I'm not defending him). Running out of a meeting doesn't mean we're all of the sudden gonna be a better team. Sure it doesn't hurt but it we're pinning our hopes on something it better be that we get some more talent and some more depth. Don't make me out to be a bad guy because I've watched us collapse over the last few seasons. It's frustrating. I'm behind the team and behind Beaty just hope we start to see progress on the field.

Interesting that after a comment that starts, "We're so bad that ...", that you reply with "first hater comment".

Is your second comment referring to Greg's response, or to the fact that no one got a hater comment up before you? {Rhetorical ?}

Relax CB, I'm not a hater, and I'm not making you out to be the 'bad guy'. Your response was half empty IMO. I totally agree that talk is just talk until you can show it on the field in both effort, dicipline, talent, and Ws. I also believe that what you do when people are not watching is just as important, and what you see in this case is a little glimpse of 'when your not watching this is how we operate' insight. Keep on rocking the chalk!

That's all I was trying to say. Hey we need to continue what Bowen started no doubt and that starts with discipline. Weis had none of it. He talked a big game but really had nothing for the collegiate level. Gill was a joke which sucks cause he was a hell of a player. It's just frustrating. It's not all about wins. I get it. Hoping we see improvement week after week and I'm very excited to see the new O!

They don't have the players, so you begin to build a program with who you do have on hand. It sets the stage. Attitude. Approach. Pride. Impressing recruits AND parents. I would rather hear this kind of "hidden area" thing than what songs the coach is playing on the PA system. I'm all about this coach and what he is trying to do. He is trying to do it the right way. No shortcuts. Will KU fans stick by these coaches and this team when the losses pile up over the next two years? Will we be "smart fans" who understand how long it takes to build a respectable program out the ashes of the last 4 to 5 years? That is the question.

It's establishing the culture of success. Some commenters apparently missed that this is a characteristic of success that has been emphasized at other successful programs.

It is also an interesting difference between this regime and the last 2; especially TG. There was some knowledge of what needed to be done to win, but neither coach knew how to translate the concept into culture among young men that didn't know what it was. TG had seen the culture at NU, and it was rooted deeply enough that the players maintained it without significant input from the coaches, but that was developed over decades. It wasn't created overnight because a coach made a rule.

It probably doesn't mean anything at this point, but the OL in the drill was:

It will be interesting to see who winds up on the A & B fields.

There were also some nice catches in that video, though I didn't notice who made them.

Maczyk better get the snap count down in his mind this year. That guy was always getting false start penalties last year.