Shortly after the conclusion of Kansas University’s annual spring game, head coach David Beaty showed up for his news conference with the same bounce and energy he takes with him everywhere. But even the most optimistic person in the room didn’t try to paint a false picture of the Blue team’s 20-7 victory against White in the Saturday scrimmage at Memorial Stadium.

Following four quarters of running clock and few highlights, Beaty didn’t hype up how great of a play junior quarterback Montell Cozart and junior tight end Kent Taylor made by connecting for an 85-yard touchdown late in the final practice of KU’s spring football schedule.

The first-year coach saw the game for what it was. At times, some Jayhawks showed potential, but mostly they all have loads of work to do. For every positive Beaty witnessed, he didn’t hide the opposing negatives. That included the play of Cozart.

“I think he did OK. He was kind of up and down a little bit, here and there. I’d like to see him continue to improve just in his fundamentals and footwork,” Beaty said after the Kansas City, Missouri, product completed 16 of 26 passes for 219 yards, with two touchdowns and an interception. “There were times when he didn’t operate great today, and I as I watched it out there, you literally could watch the fundamentals fall apart. As long as those fundamentals are there and the feet are in place, normally he executes pretty well. When they’re not, you know, he’s about like everybody else.” 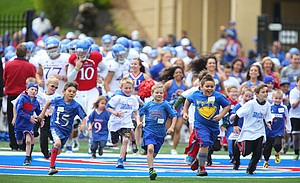 The new coaching staff and the announced crowd of 6,227 saw a lot more of the junior QB than Beaty anticipated. Cozart and senior Michael Cummings, who started the game, alternated as Blue’s quarterback each possession. That is until Cummings, who replaced Cozart as KU’s starter mid-season in 2014, suffered an injury in the second quarter after scrambling for an eight-yard run.

Cummings — just like Cozart and White’s quarterbacks, T.J. Millweard and Keaton Perry — wore a red jersey to remind defensive players not to hit them. On the fateful play, that hint didn’t do much good. Once Cummings took off to run instead of pass, White team senior safety Michael Glatczak found himself engaged in a downfield block, and his helmet ended up knocking into Cummings’ left knee as the walk-on pulled himself loose and hit the QB low.

As the play unfolded, Beaty’s view of it became obstructed. He soon after heard conflicting stories of how Glatczak knocked Cummings out of the game.

“When you get to that spring game, it is a deal where you’re always scared to death,” Beaty said. “’Cause any time you take a snap you’re at risk of getting somebody injured, and we need every one of them. I mean, our roster is at a point right now where we need every single guy.”

The new coach, though unaware of Cummings’ status after the game, felt optimistic he will be OK.

Quarterback wasn’t the only skill position where KU had to play shorthanded, either. Senior running back De’Andre Mann, Beaty revealed, had an injury that led the staff to keep him out. Furthermore, senior wide receiver Rodriguez Coleman and freshman running back Corey Avery didn’t participate in the spring game because they are suspended “indefinitely,” with their futures in the program currently up in the air.

Someone had to step up for Kansas, and early on in the exhibition, redshirt freshman wide receiver Tyler Patrick did just that, snagging four catches for 43 yards in the first quarter.

Later, senior wide receiver Shakiem Barbel began to shine. The 6-foot-3 Fresno, California, native finished with five receptions and 78 yards, including a 19-yard touchdown grab from Cozart to cap the third quarter and put Blue on top for good, 10-7.

The most positive play of the afternoon for White came a few minutes earlier, when junior tight end Sebastian Fairchild came down in the end zone with an 11-yard TD toss from Millweard.

The underdogs came up with their only score of the scrimmage because senior linebacker Aaron Plump, from Topeka, picked off Cozart.

“Plump made a good play on it,” Beaty said, “had an interception there and almost scored off it.”

Blue’s Ryan Schadler, who also carried the ball twice for six yards for White, became the most utilized running back, picking up 45 yards for Blue on eight carries. Junior running back Ke’aun Kinner only got two touches (17 yards), as did senior Taylor Cox (10 yards).

Beaty said many KU players didn’t get many snaps because the coaches needed to evaluate some other lesser-known options.

“I thought our defensive line did a nice job of getting pressure on the quarterbacks all day,” Beaty said, half a beat before adding Kansas must get more from its offensive line.

The product is far from finished, but Beaty left the exhibition feeling the Jayhawks at least had a productive spring at the end of 15 practices.