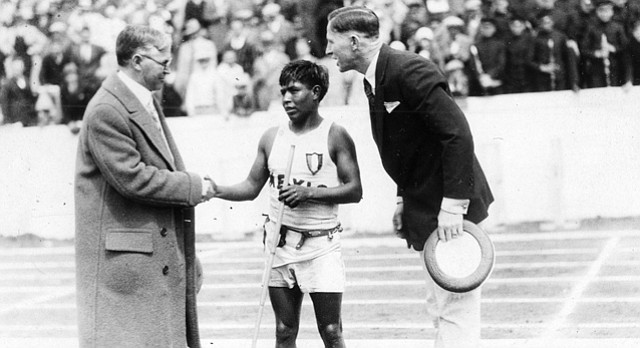 A Tarahumara Indian athlete, identified on the back of the photo as Jose Torres, shakes the hand of former Lawrence mayor R. C. Rankin, standing next to F. C. "Phog" Allen. Torres won a foot race from Kansas City to Lawrence that ended in Memorial Stadium during the 1927 Kansas Relays.

When “Born to Run” hit The New York Times best-seller list in 2009, millions of readers discovered for the first time a mysterious indigenous Mexican tribe for whom hundred-mile runs on rugged canyon trails had been a way of life for generations.

A certain Kansas University athletics director known for showmanship is credited with organizing five Tarahumara runners to appear at the 1927 Kansas Relays. The finish line for a special endurance run featuring the visitors from Mexico — 51 miles for the men, 30 for the women — was inside Memorial Stadium.

'When the Tarahumara Indians Ran' 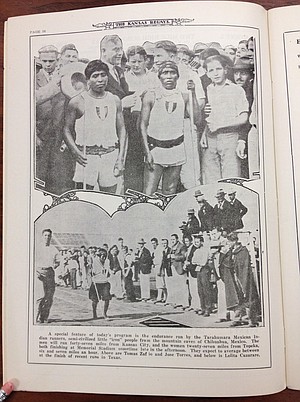 A page in the 1928 Kansas Relays program highlights the previous year's relays on a page entitled, "When the Tarahumara Indians Ran." A group of Tarahumara Indians from Mexico, a remote people known for distance running, came to Kansas University in 1927 and participated in endurance races — beginning in Kansas City for the men and Topeka for the women — that ended at Memorial Stadium during the relays. Images and programs are from the University Archives at KU's Kenneth Spencer Research Library.

This year’s Kansas Relays will be Wednesday through Saturday at Rock Chalk Park. For more coverage of the Kansas Relays, visit KUSports.com.

Joe Schrag, longtime Topeka West High School track and cross country coach, will sign copies of his book, “The Kansas Relays: Track and Field Tradition in the Heartland,” from 11 a.m. to noon Saturday at Rock Chalk Park. For more information on the book or to purchase a copy, go online to adinapublishing.com.

The athletics director was F.C. “Phog” Allen, whose promotional events during the relays’ early years helped get the annual event “off the ground,” said Joe Schrag, author of “The Kansas Relays: Track and Field Tradition in the Heartland.”

“He was always looking for ways to promote the relays,” Schrag said. “Probably the most ambitious was to get the Tarahumara Indians here.”

Allen had organized other splashy attractions to draw crowds to the relays, Schrag said. One was a pre-relay rodeo inside Memorial Stadium, where students could guess the weight of a live buffalo to win free tickets (the buffalo was then barbecued for coaches and officials). Another was a driving contest, featuring amateur and pro golfers teeing off from center field and measuring distance by a grid painted on what’s now Campanile hill.

In addition to creating buzz about the relays, the Tarahumara race was an international diplomatic success, Schrag said. Mexico had been embroiled in revolutionary fighting and was looking for ways to promote their country, Schrag said, which no doubt helped Allen’s effort.

Several weeks before arriving in Lawrence, several Tarahumara had completed a similar endurance run at the Texas Relays, running more than 80 miles from San Antonio to Austin, according to newspaper reports of the day.

The Tarahumara and their exotic ways proved an attention-getting curiosity, just as hoped.

The Journal-World reported this the day before the run:

“The Mexican runners were in fine spirits this morning and were pleased with the weather conditions. They hope that it will remain cool. As soon as the Indians reached Haskell last night they removed their leather shoes, the second ones they had ever worn, put on their sandals and ran around the Indian school track several laps to limber up their muscles.

“The runners on the day of the race will eat only pinola, which is ground pop corn mixed with water. Last evening in addition to this dish they had a boiled potato and a small helping of meat. This morning their breakfast consisted of rice.”

The “semi-civilized little ‘iron’ people from the mountain caves of Chihuahua, Mexico” were expected to average between 6 and 7 miles per hour and arrive in Memorial Stadium mid-afternoon on April 23.

And run swiftly they did, paced in part by some competition from two Haskell Institute runners.

The three Tarahumara men — Jose Torres, Manuel Salida and Thomas Zafiro — took off from Kansas City early that morning. Joining them were Haskell’s Purcell Kane, a 17-year-old Apache tribe member, and Burt Betah, an 18-year-old Navajo, both from Arizona, the Journal-World reported.

Meanwhile, the Tarahumara women — sisters Lolita and Juanita Cuzarare — departed from the capitol in Topeka, though only Lolita completed the race.

Spectators lined the roads between Kansas City and Topeka, The Associated Press reported the next day.

“The flat-footed, steady jogging of the Tarahumaras was a decided contrast to the long, smooth striding of the Arizona Indians,” according to the report. “The Indian men stopped at frequent intervals to douse themselves with water and to receive massages for their leg muscles. The girls, plainly suffering from muscular fatigue, also stopped frequently for massages.”

Torres, the winner of the 50.7-mile men’s race, cruised into Memorial Stadium in 6 hours, 46 minutes, 41 seconds, according to an article in the 1928 Kansas Relays program, headlined “When the Tarahumara Indians Ran.”

An especially dramatic moment — captured in a photo in the 1928 program — occurred when Zafiro, who finished third in the men’s race, reached the stadium.

He came onto the track just as the anchor men of the college 2-mile relay began, led by Haskell star Philip Osif, a national 6-mile champion.

"Sensing that he was being overtaken, Zafiro, who had run fifty some miles, spurted and kept up with the fresh half-milers, bringing a great cheer from the crowd,” the program said.

The “superhuman” Tarahumaras chronicled in “Born to Run: A Hidden Tribe, Super Athletes, and the Greatest Race the World Has Never Seen,” by Christopher McDougall, inspired a mini-explosion of barefoot running and ultra-marathoning in the United States.

Back in the 1920s few in the world were running that far, and especially not women.

In a way, Allen and the "wow" factor of the Tarahumara athletes he invited to Lawrence did the same for the Kansas Relays, Schrag said.

“Had it not been for his imagination and a few others in those days, the relays ... might never have survived,” Schrag said. “But to his credit, they did.”

He was more than "just the basketball coach".