KU's Charlie Weis feels the pressure in the first half, as KU hosted Central Michigan on Saturday September 20, 2014 at Memorial Stadium. 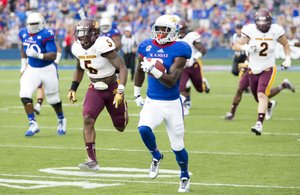 That jolt you felt Saturday was Kansas University football coach Charlie Weis bouncing off the ropes with a timely 24-10 victory against Central Michigan at Memorial Stadium.

We’ll never know what would have happened with Weis’ job status if Kansas had folded after a sloppy, uninspired first half and lost to the Chippewas of the Mid-American Conference. We only know it’s irrelevant because the Jayhawks shook from the malaise that had dogged them from  the start of the first quarter in the season-opener until the start of the fourth Saturday. During that stretch, Kansas had been outscored, 79-23.

And then the fourth quarter arrived and with it came passionate play from KU, which turned a series of big plays into a 14-0 finish.

The victory moved Weis from last on KU’s list of all-time coaches to third-from-last, ahead of Bob Valesente (.205) and Turner Gill (.208) with a .222 winning percentage. It also gave Kansas a winning record with the easiest 25 percent of the schedule in the rear-view mirror.

“You should have seen us partying in the locker room,” middle linebacker Ben Heeney said. “It’s something that we really needed. We wanted to prove everybody wrong this week and I think we kind of did.”

No real point in belaboring the unsightly particulars of the first half, but the low point certainly is worth rehashing.

Referees don’t often show a sense of humor — or was it frustration over having to call such a Keystone Kops half? — but after flagging the Kansas offense, an official turned on his microphone to share with the crowd that the false-start infraction was called against “everybody but the center.” As the crowd of 34,822 laughed, Keyon Haughton should have taken a bow.

The players who merited taking a bow in the fourth-quarter were many. Jake Love sniffed out screens on back-to-back plays and delivered punishing blows. Senior Justin McCay scored on a 60-yard touchdown pass from sophomore Montell Cozart. Senior Pat Lewandowski made a block that freed freshman Corey Avery to turn a short pass into a 30-yard touchdown reception. Courtney Arnick, Love, and Michael Reynolds harassed immobile Central Michigan quarterback Cooper Rush, and by the day’s end, KU had amassed 10 tackles behind the line of scrimmage. Receiver-turned-cornerback JaCorey Shepherd made a diving catch at the sideline for an interception to seal the game.

“We were partying pretty hard in there,” Heeney said. “We’ve got a chip on our shoulder. It was really emotional in there. We just partied. It was awesome in there.”

Asked (with a straight face) how the post-game locker room scene compared to that of the 34-28 victory against Southeast Missouri, Reynolds said, “There was way more excitement because we knew we needed this game and those big plays in the fourth quarter that gave us that two-touchdown lead and JaCorey’s interception. There was just so much emotion, so much excitement.”

Weis said, “The locker room was as happy a locker room as we’ve had in a long time. Those guys know that it could have gone either way. We very easily could have lost that game ... and they made a lot of big plays in the fourth quarter.”

At the same time, nobody was delusional enough to think that one big play on the game’s first play from scrimmage, a Tony Pierson 74-yard touchdown sprint, and one good quarter, the fourth, will get it done against Big 12 competition.

Weis said again after the game that he turned his computer off all week.

“Because I sleep in my office and I have the computer off, I’m oblivious to the real world," Weis said. "I barely know what’s going on with ISIS, to tell you the truth.”

By any measure at any time, Central Michigan shapes up as the JV squad compared to Texas.

Weis said the coaches he has worked with used the cliche, “bunker mentality” in trying times such as these.

“You’ve got to dig yourself in and dig yourself out and that’s what we tired to do this week,” Weis said. “So I give credit to the coaching staff and the players for not throwing in the towel and just going through the motions, but that’s what you’re supposed to do.”