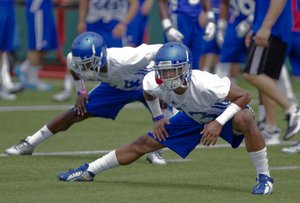 You know those game show contestants who get on a roll, answer all the questions right and make it seem as if the other players aren’t even in the room?

And that’s why safeties coach Scott Vestal added a game-show element to their daily meetings.

“In our room, we have a No-Cassius Question, because he’ll literally answer every single question,” Vestal said. “So I’ll be like, ‘OK, what are we gonna do here, and how are we gonna do this? Cassius, do not answer.’”

It works most of the time but usually just for that one question. After that, the 6-foot, 195-pound safety taps back into his brain and pulls out even the littlest details about what every defensive player on the field is supposed to do in any given situation.

“I used to always joke with him, ‘Man, we’re not playing “Jeopardy.” You can give somebody else a chance,’” joked senior cornerback JaCorey Shepherd. “That’s just how he is. He understands it. He knows it. And we listen to him. Why not have a safety who knows what everyone else is doing? It helps. It helps a lot.”

Sendish, perhaps more than any other player in the program, puts a premium on studying and truly enjoys that aspect of the game.

So impressed with Sendish is KU coach Charlie Weis that he recently proclaimed that the junior-college transfer set to begin his second season with the Jayhawks may not be the best player on KU’s defense but was, without question, the skipper of the secondary.

“Cassius is probably the most natural leader on our team,” Weis said. “I can’t see one thing about the kid that I don’t like. I’m a big fan.”

A lot of this might be news to most people. Sure, Sendish was third on the team in tackles last season with 68, and, yeah, his name is one that usually raises an eyebrow and sticks in your mind.

But there’s nothing flashy about what he does on the field.

“The thing with Cassius is, he makes a lot of routine plays,” Vestal said. “It may be a six-yard tackle, but some people miss that tackle, and it becomes a house call. Cassius does what he’s supposed to do.”

KU linebacker Ben Heeney, the opposite of Sendish in a lot of ways — loud game, well known name, native Kansan — said Sendish was the one player he made sure to communicate with before every snap. The two usually line up on the same side of the field, and Heeney said the comfort that comes from knowing Sendish is behind him is what allows him to let it rip.

Sendish is probably my favorite player on defense because he is what you hope for out of a JuCo player.

or that next year he is in Tait's "Latest Jayhawks to make it in the NFL" article - and then comes back to coach.

It's great to have players on the team like this! Rock Chalk!

Isaiah Johnson may not speak up in the classroom, but something tells me he has most of the answers too. The guy has a nose for the ball.

You're not a fan. You're the darn head coach. Successful head coaches do not talk this way. They use encounters with the media as opportunities to push their players further toward improvement. Nothing wrong with commending a kid but if you look at the rhetoric coming from Saban, Snyder, Stoops.. it just doesn't sound like this. Coach Weis sounds like a network contributor, not a head coach. There are many examples of him talking like this. All he can talk about is how much stronger, faster and better everyone looks.

I don't know if Weis will be successful here or not but what I do know is that his leadership style is very different from other strong leaders that lead successful programs.

I am not smart enough to know, but I think Weis is a better professional offensive coordinator than college football coach. Having said that, I think you're being a bit too hard on him for the particular comment made. To the extent that coaches are responsible for player development, Im not sure that Charlie believes himself that Heeney has no room for improvement. But coaches must also be cheerleaders to an extent. They have to impart confidence into their players. One thing I know from having played football a long time ago is that a player is a better player when he believes in himself. To have an endorsement from the head coach DOES provide some motivation, and I assure you it ups the level of play. Is the statement accurate? Maybe not. Is the statement motivational? Undoubtedly. (I assume Weis has iterated his sentiments to Heeney regarding his level of play personally, though the quote above was not made to him.)

Pete Carroll has a similar leadership style to Weis in that he's a very positive and uplifting person who likes to have fun. The notion that only drill sargent style leadership wins is a complete load of crap.

Peter Carroll won the PAC 10 like 7 years in a row.. and he won several BCS bowl games. He was coaching 5 star, egotistical athletes who need to be handled differently. If you blast one of them in the media, they'll transfer or enter the draft.

A much better comparison would be Weis to coach Snyder. Both coaching in Kansas where it's hard to lure talent. Discipline and attention to detail are your only chance to be competitive long-term.