Kansas City Royals' Billy Butler celebrates after scoring on a hit by Alex Gordon during the second inning of Game 7 of baseball's World Series Wednesday, Oct. 29, 2014, in Kansas City, Mo.

I’m trying to figure out how losing Game 7 of the World Series instead of winning it made the Kansas City Royals any less worthy of the respect and gratitude typically reserved for World Champions.

Really, would you love the 2014 Royals any more than you do right this minute had they won Game 7 of the World Series, instead of losing it, 3-2, with Alex Gordon standing 90 feet away from scoring the tying run and San Francisco Giants left-hander Madison Bumgarner, among the greatest Fall Classic pitchers in history, standing so tall on the mound?

The empty feeling from finishing second quickly gave way to admiration for the remarkable baseball team that showed such toughness, such remarkable defensive prowess, such an appealing bullpen that stood out in equal parts because it dominated with such overpowering stuff and celebrated itself so little.

Kelvin Herrera (1.80 postseason ERA), Wade Davis (0.63) and Greg Holland (0.82) didn’t have the stylish nickname to match the 1990 Cincinnati Reds of Randy Myers, Rob Dibble and Norm Charlton, known as the Nasty Boys. But the Royals’ three-headed monster did have enough substance to log 51 strikeouts in 40-1/3 innings.

If Bash Brothers Mark McGwire and Jose Canseco were the poster boys of baseball’s steroid era, then the 2014 Royals are the poster boys of the post-steroid era. Not long ago, team chemistry meant finding the right mix of performance-enhancing cocktails to inflate muscles, statistics and contracts. For the Royals, team chemistry meant creating runs by stealing bases and bunting, preventing runs by turning hits into outs, extra-base hits into singles. 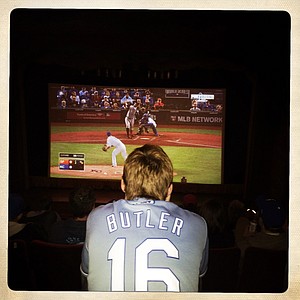 Hall of Fame slugger Reggie Jackson, known as Mr. October for his clutch World Series play, long has been fond of saying, “If you’re going to stand in the corner, you better be able to lean on the pole.”

Sound conventional wisdom. It’s difficult to pack a lot of punch without getting home runs from the men playing first and third base, left and right field. It didn't apply to the Royals. Right fielder Nori Aoki hit one home run, first baseman Eric Hosmer nine.

What the Royals lacked in power they compensated for with stellar defense from the four corners, especially Hosmer, third baseman Mike Moustakas and three-time Gold Glove winner Alex Gordon in left field.

Up the middle, no foursome in baseball can match the leather and arms of catcher Salvador Perez, shortstop Alcides Escobar, second baseman Omar Infante and center fielder Lorenzo Cain, a burgeoning star who first played organized baseball as a sophomore in high school.

These Royals played as pure a brand of baseball as has been seen in a long, long time and for four of the games wore home whites so beautiful as much for their simplicity as their style.

The Giants had the best pitcher in Bumgarner, who threw 21 innings, allowed one run and one walk, struck out 17 and limited the Royals to a .127 batting average. And they had the two best hitters. Right fielder Hunter Pence, eyes, bat and long strides on fire, batted .444 and knocked in five runs for the Series. Pablo Sandoval hit .429 because that’s what the Panda Bear does in the World Series.

Sometimes, the most pure sense of the word “team” is embodied by one in which naming the best player is no easy task. For Kansas University’s 2008 basketball national champions was it Brandon Rush, the leading scorer and best defender? Darrell Arthur, who had 20 and 10 in the title game? Sherron Collins, who broke down a defense in a way nobody else could? Mario Chalmers, peerless in the clutch?

For the Royals, was it Cain with his big catches, timely hits and swift baserunning? Davis or Holland out of the bullpen? Salvador Perez behind the plate and at it?

And then there was Ned Yost, who spent more time under the french-fry lights of second-guessing than any man ever should and never once wilted, never once showed his players a face other than one that reminded them they were playing their favorite game on the ultimate stage so enjoy it to the fullest.

Not to be forgotten, The K crowd backed the Royals with the sort of passion that drew the respect of the opposition, even when hecklers drew dangerously close to the inappropriate line without crossing it.

In one of the games before the Series moved to San Francisco, a father-and-son tandem sitting within earshot of Pence in right came armed with all sorts of personal history about him, including that he used to date Houston Texans cheerleader Lindsay Slott.

“Hey Pence,” they hollered at him all night, “your girlfriend’s a Slott!”

Finally, after being the target of relentless verbal assaults for eight innings, Pence turned to them, smiled and gave them a thumbs-up. Without blinking, they responded with two-fisted, one-finger salutes of the variety that as of a few days ago, Canseco no longer can execute. Pence’s smile grew broader.

The Giants earned the right to be called World Champions for the third time in five years. In the hearts and minds of those in this slice of the world, the 2014 Royals will fondly be remembered as nothing less than champions.

Couldn't make it to today's #Royals Season Celebration? We have you covered with a live stream: http://t.co/bjwSoAYZbf

None by Kansas City Royals

I was disappointed when they lost last night. After Infante got on being the first batter that Bumgarner faced, two batters in a row, the umpire gave him strike calls on balls that weren't even close to being strikes. Then, the strike zone upper limit changed when he came in the game. He didn't hit his spots. Nobody knows where his pitches were going to end up, including Bumgarner.

Though, I think we should have forced SF to try to throw Gordon out at home. We should have sent him there. They didn't nab anyone at the plate the whole series. At least, put the stop sign up late after the ball is on it's way and force them to make a throw to plate. A wild throw, and the game would have been tied.

The reason why I brought up the balls out of the strike zone. Once the umpire calls one of those a strike early in the count, the batter has to swing at them, even if they are not hittable because they are so far out of the strike zone. Bumgarner also got pitches called strikes that were inside. The strike zone changed for him, but it didn't for anyone else. He really wasn't that good last night. He didn't hit his spots at all.

On the radio in the Bay Area, they were talking about the Gordon play. They said that the Royals would have been crazy to send him home, and that he would have been thrown out by at least 20 feet.

Brandon Crawford was one of the best shortstops in baseball at making the relay throw to the plate, and they said there was very little chance he would have scored. I agree with that assessment, as it didn't look like he would have had much of a chance.

The play that will disturb me forever was having Escobar bunt. You just can't waste an out there, ESPECIALLY once the count got to 2-0. I know that's Yost's modus operandi, but use common sense, for crying out loud! And he did it while knowing that Aoki was 0-16 against Bumgarner! Just a stupid, ridiculously conservative move.

If he was going use the bunt there, then at least try to have the runner steal third so you have the possibility of a runner on third with one out. The Royals barely even tried to run the entire series, which I had a hard time understanding.

Keegan's point is well taken that this was a team that should be celebrated; what an incredible season. On the other hand, it's hard not to be frustrated by what might have been.

The Royals got exactly what they wanted out of the Escobar bunt. He advanced Infante into scoring position and Aoki played the ball beautifully into the opposite field. The Giant's LF Perez made a tough catch on the run, or else Infante scores from 2nd and ties it up. I thought it was an excellent call on the bunt to advance the runner.

Yes. We probably should have brought Dyson in to pinch hit for Aoki if we were going to bunt with Escobar. Then bunt with Dyson to get to Cain with the bases loaded.

But still, after Infante got to second after the bunt, the umpire sort of changed the strike zone to benefit Bumgarner.

Well, that is sort of why I said to force the throw. First, the center fielder choked. Then the left fielder that was in their for defense almost choked and kicked the ball further towards the left field line. He should have came around third hard, at least, to force the relay throw. That was for the last out of the series. If they blow it, Gordon scores. All series long both the center fielder and left fielder made all the plays until then. You still have more than a fifty/fifty shot that Crawford doesn't make an accurate throw and makes the catcher have to move one way or another to try to prevent the ball from going to the backstop.

Wow the article was going so well and then you backed over the fan base with a mack truck. I don't think that those two idiot fans represent most Royals fans and if they do that's embarrasing. That said the Giants didn't really win this series as much as Bumgarner won it. He carried the team on his back by baffeling the Royals hitters. Had he not been available in game 7 the Giants don't win. In fact I'll go so far as to say if they didn't have him the Royals may have won in 5. He shut down the Royals offense like no one I've seen all season. Not consistently. It is most definitely a team of grit and guts in the Royals. They have rekindled my love for this game that was extinguished during the 94 strike season which was also the last time the Royals were in contention for a playoff spot. That strike took the game I loved away and with it my passion for the game. I definitely thank the Royals for bringing that passion back. Watching every moment. Every pitch. Every out. It was a hell of a ride. Congrats to the Boy in Blue!

anyone want to wager a bet that they also root for Mizzou or K-State during the MLB off-season?