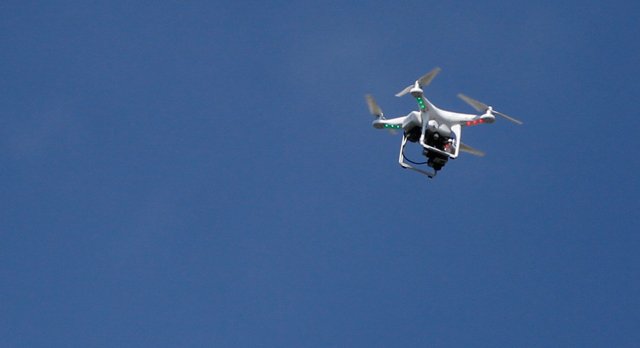 Before kickoff of the Kansas University football game against Texas, an unauthorized drone helicopter with a camera attached was seen flying over Memorial Stadium, Saturday, Sept. 27, 2014.

A Kansas University official says the school is taking seriously an incident Saturday in which an unauthorized drone flew around Memorial Stadium right before the Texas-KU football game.

"We don't want those things over a crowd," said Chris Keary, assistant chief of the KU Office of Public Safety.

The Federal Aviation Administration closes airspace around the stadium during football games for a radius of three miles and up to 3,000 feet in the air, Keary said.

Sometimes the FAA grants waivers and local law enforcement is notified. That's what happened Saturday when a group of pilots flew their private aircraft and blew smoke of various colors to entertain the pre-game crowd.

But around the same time, an unmanned aerial system, or drone, made its unauthorized appearance for about 15 minutes, Keary said.

"Our concern is that we had a device in the air … at the same time those pilots came over on a flyover. That could have potentially been serious," he said.

Police tried to determine where the drone, which appeared to have a camera attached to it, came from, but it flew off in the direction of Strong Hall. Keary said he was reported the incident to the FAA. A spokesman for the FAA did not return a call for comment.

Last month, a student at the University of Texas was arrested for flying a drone during a football game at Texas Memorial Stadium in Austin. The FAA also is looking into a drone that allegedly flew over an NFL preseason game in Charlotte, N.C.

Federal regulations currently prohibit most non-military drones from being used but Congress has told the FAA to issue a ruling soon on the possibility of greater drone use by next year.

I was afraid it was going to drop a Black Cat right in the middle of the crowd.

At a KU football game, that is a good sign.

It wasn't hard to see where it landed. I watched it land. It landed on the hill at one of the white tents.

It had the termination paperwork for Weis as payload.

It was trying to figure out what formations the Jayhawks were using, as the team was doing things previously unheard of...

Or, it was learned by the Univ. of Texas that Montell Cozart has a lifelong utter fascination with drones, and an assistant under Charlie Strong correctly deduced a live drone appearance may alter the young KU QB's concentration. That TX assistant is now being hotly pursued by Bill Belichek of the Patriots for that team's revamped 'scouting' dept...

Or, in a nutshell: the Univ. of Texas uitlized a drone to utterly crack the code and de-mystify KU's "decided schematic advantage".

Ruefully, we recall a phrase by Charlie Weis: "the day there are 'horns flying over Memorial Stadium, you can call me ___..."

Is this headline really about the unmanned aircraft, or really about the drone of a disappointed fan base watching another KU football season fall by the wayside? My guess, next home game more cheering, less drone.