Kansas quarterback Montell Cozart calls out a play during practice on Wednesday, Oct. 1, 2014. 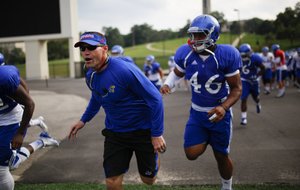 Images from the Jayhawks' football practice on Wednesday

Change of any kind can create some uneasy days and be pretty taxing on the mind.

But, so far, the transition from former Kansas University football coach Charlie Weis to interim head coach Clint Bowen seems to have done wonders for the spirits of the KU football players.

Nowhere does that seem more true than at the team’s most important position, where sophomore quarterback Montell Cozart moves into his fifth start of the season with a newfound confidence in his game.

It’s not because of a new game plan, new throwing motion or easy opponent on the horizon, but rather because of a conversation he had with Bowen prior to Tuesday’s practice.

Bowen has made no secret about the importance of Cozart’s continued development and improvement. If the Kansas offense can’t get going, winning any of the remaining eight games is going to be difficult. Bowen knows that. Offensive coordinator John Reagan knows that. Cozart knows it, too. But he says his confidence is in good shape entering Saturday’s 3 p.m. kickoff at West Virginia.

Bowen, Reagan and quarterbacks coach Ron Powlus all believe Cozart has what it takes to lead the KU offense to better days. It won’t be easy, though, and it won’t happen overnight.

“He’s a mature kid who I think is learning to have thick skin and a short memory,” Powlus said. “I won’t speak for him, but I’ll speak from experience. He’s a young quarterback who’s in his fifth game in a new offense, and some things are hard. He’s finding those things out, but he’s a hard worker and he’ll continue to work to get better.”

Kansas University seniors linebacker Ben Heeney and defensive lineman Keon Stowers have played for Clint Bowen's defense and say the new interim coach will bring tremendous energy to the entire team now that he is in charge of the program.

KU captain Ben Heeney said Wednesday that it had become a normal thing to see Bowen jump into drills and conditioning tests at practice. And it started from Day One.

Several Jayhawks on Wednesday said the week so far had seemed like the start of something instead of Week Five.

“It does feel like it’s a new beginning, even though, obviously, it’s not,” senior cornerback JaCorey Shepherd said. “Young, old, I think everybody feels that way from the top down.”

Heeney said the changes, big and small, that Bowen has implemented thus far have been well received.

“We’re all excited around here because everything’s getting changed up. …It’s giving us a chance to focus more on one thing at a time and, at the end, when we go into team, we can kind of tie it all together.”

Is it unusual to see this kind of reaction coming from players whom their coach has just been fired? I could see that the players weren't buying into to Weis and they played with very little pride for their coach so it makes sense that the players are ready to move on. I wouldn't say that I expected this amount of excitement about it though. I would have expected the players to be a little more down than they are.

Regarding Cozart, I love the type of player he is and the potential he possess, however, when does KU start to look to their backups? When is enough, enough? How many weeks did Crist have before he was benched? How many weeks did Heaps have? There just may be a "Reesing" to make a change, pun intended. I love KU so whatever the coaches think is best but I would love to see what KU has lying on the bench here in the near future.

I was thinking the same thing from the reactions I read. How many times does a head coach get fired mid season and there is ZERO talk about how the players are ticked. It may explain a lot to how the defense always looks fired up and ready to play and the offense looks like crap. The defense loves their coach and feeds off his energy. It also struck me as odd, the language zenger used. "We have lost support at ALL levels" I think that was a hint that weis had lost the players too....

I don't remember the details and don't have the information at hand but didn't Reesing get his first shot in a similar situation where he came in for his first game well into the season when KU was desperate for a change? And didn't he really struggle the remainder of that season and possibly part of the next season before he began to put it all together? Cozart appears to have the physical tools. He needs time to learn and pull things together mentally. I really think this kid needs some time before we all beat him down. If, in time, he's not improving, then we beat on him. Hopefully, in time, we'll be giving him standing ovations. We'll see.

I don't remember Reesing taking long to make an impact. I was thinking he was more of an instant-impact guy.

Reesing got his first game action late in his freshman season (burned his redshirt) because Kerry Meier was injured and Barmann either got injured or was not producing. Reesing was a huge spark plug in the game, but I think that Meier came back as the starter the following week when he got healthy. I don't remember if Reesing played very much after that game. In the following spring Mangino brought in Warriner and the spread offense. Reesing won the starter job that fall and he was lights out good from day one as a sophomore (Orange Bowl year).

My only concern about the confidence this staff has in Cozart is they could be wrong. If so, Clint is going to ride a horse thru the rest of this season that cannot and will not win him the job.

I think if Montel fails this week similar to last week, they must go to the back ups to see if any of them have "it". We all know Reesing wasn't successful because of his height, strength or speed, it was simply because he had "it". I hope Clint finds that guy on this roster in time to show what he can do as a HC.

But Montell, running out of bounds every time instead of charging up field for a first down and maybe more IS playing timid.

This quote from Corey Avery came from an ESPN article.

"Running back Corey Avery, a freshman who had been recruited to Kansas by Weis, said players had different emotional reactions to the change. Some of them were disappointed, others grateful for the opportunity that Weis gave them. Some were ready to move on.

"I wish I could have been around longer, get to know Weis better," Avery said. "I haven't been here that long. I was glad I got to play under his coaching as long as I did."

Not all of the players have had the same reaction, but it seems like the prevailing sentiment is that it was time for a fresh start, and some new energy, and the mood in the locker room is contagious. Players generally excited about a fresh start and renewed energy. Hopefully it translates into inspired play, but it could translate into sloppy play and lots of penalties in the early going.

I'm glad you shared that link, I had missed that on ESPN. I like what the players had to say and the part about the applause at the announcement makes me hopeful that we'll see an improved product on the field. I'm sick and tired of all this losing!

Not enough changes have been made. I hope Bowen doesn''t ride the same horse too long.

Cozart reminds me of Williams back in 95. I think he'll be okay in time. Just don't know if now's the time. Seems a waste to have a senior with some experience. Here's hoping Bowen brings out the best in him.

The jury is out in my view. There are two possible views that I can see.

I think that Reagan is going to be up in the box instead of on the field from here on out as well which will allow him to better recognize what Cozart is missing. That can then be relayed through the coaches on the sideline to both the entire offense so they can get better at recognizing it on their own and just use chemistry to make plays. If after a couple of games, and Cozart continues to be the way he's been, it would make sense to move on with a different QB and let Cozart view it from off the field. Sometimes players can learn better from watching it from off the field.

I think you're right about no. 1, Micky (and I hope you're wrong about no. 2). I was surprised at how much the play-calling looked like last year. And I wonder if one of the reasons that Reagan was on the field was so that Weis could more easily communicate what he wanted to him.

I think there had to have been some serious turmoil inside the program or at least some issues not brought to light. Issues with Weis. Maybe he was phoning it in.