Kansas University's Asia Boyd (0) and Notre Dame's Markisha Wright fight for a possession during the second half of Notre Dame's 89-47 victory Sunday in Uncasville, Connecticut. 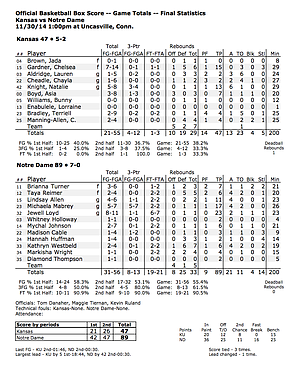 Playing away from Allen Fieldhouse for the first time this season, the Jayhawks were shellacked, 89-47, by No. 2 Notre Dame on Sunday at Mohegan Sun Arena.

Gardner, who has scored 10 or more points in every contest this season, finished the afternoon with a team-high 15 points and six rebounds. Knight contributed 13 points thanks to a 3-for-4 performance from behind the three-point arc. Kansas shot 38 percent from the field and was just behind Notre Dame’s 33 rebounds with 29 boards.

Notre Dame (7-0) had three reach double digits and helped lead the No. 1 scoring offense in the country to a 55 percent shooting percentage. Junior guard Jewell Loyd led the Irish with 23 points. She was followed by junior guard Michaela Mabrey and sophomore guard Lindsay Allen, who had 17 and 11 points, respectively.

Kansas outrebounded Notre Dame in the first few minutes, but the Jayhawks (5-2) were unable to convert at the other end, keeping the Fighting Irish in the game. ND opened with a 9-2 run.

“Once they got going in transition it led to easy baskets,” Kansas coach Bonnie Henrickson said. “They create chaos on defense with their length, and it’s tough to match.”

Notre Dame shot 65 percent from the floor in the first half and took a 42-21 lead at the break.

Gardner was recognized as the most outstanding player for Kansas in the Naismith Hall of Fame Women’s Basketball Challenge. A member of each team was given this award.

Kansas will return to Allen Fieldhouse to play host to Incarnate Word at 7 p.m. Thursday.