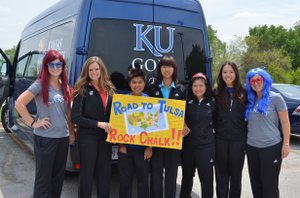 Members of the Kansas University women's golf team pose on Saturday, May 17, 2014, before heading off to the NCAA Championships in Tulsa, Oklahoma. The Jayhawks are, from left to right, coach Erin O’Neil, Meghan Potee, Yupaporn Kawinpakorn, Pornvipa Sakdee, Thanuttra Boonraksasat, Minami Levonowich and assistant coach Katy Nahm. O’Neil and Nahm are wearing crimson and blue wigs, a compromise made after telling the players they would dye their hair if the team advanced to nationals.

Minami Levonowich, who did not hit a single 4-iron during the first of three 18-hole rounds at the recent NCAA Central Regional golf tournament, pulled that club out of her Kansas Jayhawk golf bag without hesitation on the second day.

KU’s junior transfer from Kennesaw State deduced it was the right club for her second shot on the par-4, 464-yard No. 17 hole at Karsten Creek Golf Club in Stillwater, Oklahoma.

The ball kicked into the hole for an eagle — one that propelled Levonowich to a 19th-place overall finish and helped KU to a fifth-place showing out of 24 teams and spot in this week’s NCAA championships in Tulsa.

“It’s a really long par-4. I had 177 yards in. I hit my 4-iron, which I hadn’t hit all weekend. I said, ‘OK, I might as well try it,’” Levonowich said. “It was a low draw but it kept just running up to the green. It had one bounce. It hit the middle of the pin exactly. If it didn’t hit the pin it would have gone over the green.

“The pin was back. It saved me. I was really excited about that. After that, I just played well. I was really fired up after that eagle,” she added.

Levonowich, who was born in London and moved to Hilton Head, South Carolina, to attend Hank Haney Academy during her high school years, shot an even-par 72 in the second round and 1-over 73 in the third. On the final day, KU improved five spots to finish fifth. Top eight teams advanced to the 24-team national meet, which runs Tuesday through Friday at Tulsa Country Club.

“I heard a lot of cheers. Even people from other teams cheer when stuff like that happens,” said KU senior Meghan Potee, who was playing on No. 18 when Levonowich soared with an eagle. “I definitely heard it from across the pond. I was like, ‘All right. This is good. That’s got to get her fired up and she can finish strong,’ which she did. It was exciting. Hopefully somebody on our team can do it again this tournament — a hole-in-one or eagle or anything holing out from the fairway would be awesome. It gets everybody fired up,” Potee added.

Levonowich, who has had five top-20 finishes this season at KU, has been playing especially well of late.

Her 19th-place finish at regional followed a 26th-place showing at the Big 12 championships. At regional, Levonowich’s 6-over total of 222 tied her KU career-low tournament total, as she accomplished the feat behind four birdies on the final day. Through the entire regional, Levonowich carded seven birdies and one eagle.

“I am the shortest hitter on the team, but I’m also really accurate,” Levonowich said. “Since it’s a narrow course (last week in Stillwater) I was always in the fairway; but I always had 180 yards to the pin. I relied on my hybrid and long irons a lot. For the most part it worked. I didn’t have many birdie opportunities. When I make eagles and stuff like that, I just don’t need to putt,” she added, smiling.

Coach Erin O’Neil likes the way Levonowich has been playing.

“She did step up her game and took it to the next level, which was fun to see,” O’Neil said. “It wasn’t necessarily a course that fit her game per se. She doesn’t hit it a long way, but she is straight, which is good, and her short game is good and she does have a good mental game.

“She had a great 4-iron for eagle. It was phenomenal,” O’Neil added with a smile.

KU will again go with the lineup of Levonowich, seniors Potee and Thanuttra Boonraksasat, sophomore Yupaporn Kawinpakorn and freshman Pornvipa Sakdee at nationals. The No. 29-ranked Jayhawks, who will practice today and Monday in Tulsa, will be playing the first two rounds with No. 18 Virginia and No. 24 Iowa State. The three teams will start on hole No. 1, at 8:36 a.m. Tuesday, and on hole No. 10, at 12:56 p.m. Wednesday.

“Coach told us the greens are fast, a lot of bunkers, it’s fairly long,” Levonowich said. “It’s about the same as what we’re used to. Nothing new. Play like we did at regionals and we’ll be fine.”

Confidence will be a key for the entire team and the emerging Levonowich.

“I feel the whole year in general I’ve been the type of consistent, steady player but not done anything spectacular,” Levonowich said. “I’m really glad I can finally prove to myself and the team I really want this and can really shoot low numbers. This team is full of really good players,” she added, “ones that work well together. That should help us again.”