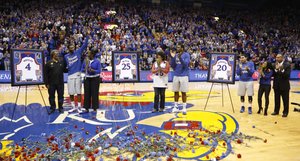 But the Canadian sensation was implored to stand up after Wednesday’s 82-57 victory over Texas Tech — before the senior speeches — by coach Bill Self, who had a throng of 16,300 give the freshman guard a standing ovation. Self also had fellow frosh Joel Embiid and Wayne Selden stand, as well as soph Perry Ellis, junior Naadir Tharpe and soph Jamari Traylor.

Wiggins addressed his emotions in the postgame media session.

“I think it is all bundled up right now,” Wiggins said after scoring nine points off 3-of-7 shooting with four boards in 23 minutes. “I am happy, yet sad it is my last game. I have enjoyed my time here. I am thankful for everything. I’ve been blessed with a good team, great coaches and the best fans anyone could ever ask for.”

“I don’t think it has hit me yet,” said Wiggins. “It feels like just yesterday that we had Late Night, so it has definitely not hit me yet.

“It has gone too fast,” he added of his one season in college. “I wish I had more time to stay here, do my thing and be with the team, the coaches and all these wonderful fans. The fans are incredibly loyal.”

Of Wiggins, Self said: “We talked a lot about it more than likely being his last time coming out of the tunnel. If he was nervous or wanted to make a statement, he didn’t act like it.”

Self, by the way, said it “is almost a logical no brainer” for Wiggins to be named Big 12 Player of the Year. Self said he’s the best player on a team that has won the league title by a substantial margin.

Embiid feeling better, undecided: KU frosh center Joel Embiid said his back (lower back strain) is feeling better and he might be able to play in next week’s Big 12 tournament.

“I’ve been getting treatment,” he said. “I don’t know but I think I’m going to be able to play (next week).”

He sat on a special tall chair to keep his back straight at Wednesday’s game.

Asked about the fans imploring him to stay, Embiid said: “I mean it was amazing. They have been there from the beginning.”

Self cut a joke in addressing the fans about Embiid: “Hey, didn’t you guys think Joel looked great in a suit tonight?” Self asked the fans postgame. Embiid didn’t dress for the game because of his bad back. “But Jo,” Self said to Embiid, “everybody thinks you look much better in a uniform than you do street clothes.”

Freshman Wayne Selden, who had four points and four rebounds in 23 minutes, said “no,” when asked if he’s decided if he will return next year. He’s also considered a likely first-round NBA prospect.

Kansas University seniors Tarik Black, Niko Roberts and Justin Wesley were honored with their parents before the game, then spoke to the fans immediately after.

Roberts, 5-11, 175, from Huntington, N.Y., first spoke for five minutes. “Without coach Self I wouldn’t be here. I don’t know where I’d be. I appreciate the opportunity,” Roberts said. “I want to thank my teammates. You are all my brothers,” he told the Jayhawks.

“I remember the first time I came here somebody said, ‘Are you ready for 16,300 (fans) every night?’ I said, ‘Will it be like that for the exhibition games and ones we’re expected to win?’ He said yes. Now I know what he meant. We have the greatest fans in America,” Black exclaimed.

“Keith played a father role for me, but you taught me so much on and off the court as well,” Wesley told Self.

To his mom, Charlene, his said: “Love you for putting up with me for 22 years. I was always considered the wild child of the three (boys).”

Harbaugh in house: Current San Francisco 49ers coach Jim Harbaugh attended the game as well as the afternoon shoot-around. Harbaugh spoke to the team, and for good measure, hit a half-court shot.

“You can understand why he’d be fun to play for,” Self said. “He had everybody fired up talking to them (Jayhawks) before the game.”

This, that: Tarik Black finished a perfect 9-for-9 from the field, the most efficient performance by a Jayhawk since Mark Randall also made nine field goals without a miss against Rider, Dec. 15, 1990. Prior to that, Danny Manning went 10-of-10 against Oklahoma St., Jan. 18, 1986. ... It marked KU's' 31st-straight home season finale victory, including 30-consecutive Senior Nights (the 2006-07 roster did not have a senior). ... Wiggins improved his KU freshmen record for free throws made (138), free throws attempted (181) and scoring average (16.03). He moved past Paul Pierce (341) and into sixth on the freshman field goal attempts chart with 347 ... Sophomore Evan Manning hit a three-pointer in the second half, his first of the season and third for his career.

Any updates on Myles's visit?

Not exactly new but...

I think he is waiting on Embiid's decision to make his. I can think of no other reason for waiting.

Embiid tweeted earlier today "Amazing night for the seniors...Can't wait to be a senior Too bad I didn't play but they took care of business #WeAllFromAfrica #kubball" Maybe he isn't going anywhere for awhile? Hopefully

Nice tweet by Embiid, and yes, I've been following the discussion on Embiid and should he stay or should he go, so I know that he's debating what is best for him and if he's ready, etc.

I know that he's family oriented values education, and wants to honor his parents and so on.

Still, I can't imagine a scenario where the consensus #1 draft pick returns to college for another year.

I hope he stays, but I count him as gone.

Probably wishful thinking, but wouldn't he like to be the next Shaq in college, or Olajuwon?

Can we go with Patrick Ewing since Ewing won a national title?

“I wish I had more time to stay here, do my thing and be with the team, the coaches and all these wonderful fans."

Hey Wigs, nobody's putting a gun to your head and making you leave college early for the NBA. You have three years of eligibility left that you are more than welcome to use here. And frankly, you could use them. You've had good games as well as bad games, showing that you've got a long way to go to be ready for the big-time. If you didn't have so many sycophants telling you how you're the Next Big Thing, you might be better able to see that and more willing to come back for your sophomore year.

It's hardly just sycophants telling him to go, when it's pretty much universally acknowledged that he'll be one of the top three picks.

If I was offered millions at 19, destined to be a star and franchise player, huge shoe contract, I know which direction I would be leaning.

You can take all that other stuff out of there and I would STILL go! I was in comp sci at KU and if IBM had offered me that kind of cash for 3 years or so, I would have been gone before you could ask me where I was going.

I've always wondered how true the rumors were that Harbaugh nearly became KU's head football coach. I'm sure he was approached, but doubt he ever seriously considered it despite some of the comments I have heard.

Its way more true than some would have you believe. Lew told some assistants they could keep positions and rest is history. Never say never of him being in Kansas blue and I will always say that!

Supposedly, Jim Harbaugh was ready to come to KU, but he wanted to coach Stanford in their bowl game that year and Perkins told him he couldn't do that so Harbaugh passed.

Some interesting Tourney matchup scenarios based on Monday's bracketology. Sure that they'll change today, but for what it's worth, if this were the bracket we could play:

Michigan or Syracuce or Kentucky or Okie State (rematch central)

Arizona (would love to beat these guys)

Got to throw in UNC just because and because of this season, Villanova and San Diego State, but I want to beat Arizona bad.

Don't wish for too much. Have you seen AZ. They remind me of KU in '97 - a pure team that knows where everyone is on the court. A really strong offensive team despite low point production. And do you really want to fact 6'9" and 7' on the front line, plus a lights out shooting guard? Florida has offense issues, but they can lock teams down like no one I've seen in a while. And they do so without the talent that UK had two years ago. Michigan is missing their center, but they have the same nuisance shooting guards, just different names. And their guards rebound. All are low turnover teams. You can bet almost every March that KU will have to play UNC and Roy at some point. This team isn't loaded with talent, but that's a good thing. They play very well together. They don't shoot free throws well, but did against Duke. Face it, you aren't going to play who you expect and aren't going to play the way you expect. UNI and VCU are still out there by other names. You win this tournament by playing like a very solid team or by have a guy who takes over. McLemore didn't do it last year - remember his baseline drive late in the Michigan game that should have been a dunk or reverse. KU can clearly do all of these things, but needs to do them all of the time.

William, that's the best post on this thread. Excellent summation. And thank you for pointing out (with your McLemore example) that KU losing to Michigan was a team-fail, not EJ's alone. Your lesson to us is 100% correct: we have got to play consistent and tough from here on out. Thats it.

Cool Black played the way he did.. every future KU team needs a positive source like Tarik Black.

Oh man I do NOT wanna play SMU in the first round. That would be a tough and physically exhausting game.

I want them to be the Shockers 8-9 seed. Larry would do some work!

So Harbaugh was getting his contract for a couple of years setup? NICE!

LOVED having Andrew Wiggins, best freshman Self has ever had, true OAD. So sad to see him leave. Always will wish him the best!

Goodbye Wiggs! By the way, this may be the last time you play in AFH, but it's far from the last time you'll see these "incredibly loyal" fans! We travel very well! See you along the way! Rock Chalk! :)