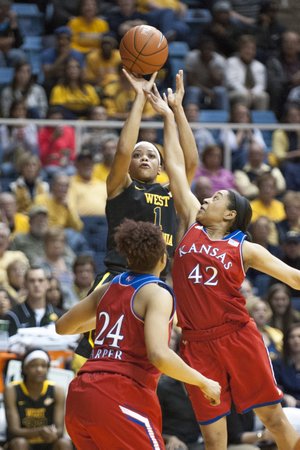 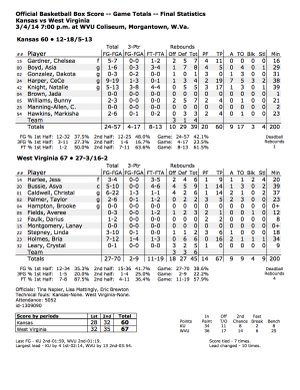 Morgantown, W.Va. — Bria Holmes scored 16 points to lead No. 7 West Virginia to a 67-60 victory over Kansas University on Tuesday night for a share of the Big 12 women’s championship.

No. 9 Baylor defeated Iowa State, 70-54, later Tuesday for a piece of its fourth consecutive conference title. Based on a tiebreaker, Baylor earned the top seed for the league tournament in Oklahoma City, and West Virginia gets the second seed.

Knight scored 17 points and had three treys to move her into sixth all-time at KU for three-pointers in a single season. Junior forward Chelsea Gardner recorded 11 points on 5-of-7 shooting and grabbed seven rebounds, despite playing just 17 minutes because of foul trouble. Filling in for Gardner was junior forward Bunny Williams who grabbed seven rebounds to tie her season-high.

“They really did a nice job defensively and (when) we turned it over, they scored,” KU coach Bonnie Henrickson said. “I thought our kids battled.”

Asya Bussie and Christal Caldwell added 14 points apiece for the Mountaineers, who are riding a 10-game winning streak.

Regardless of how the conference tourney ends up, Henrickson expects West Virginia to make a deep run in the NCAA tournament.

“I mean, who has had the best depth in the league but them?” she said. “Their depth is really impressive.”

Bussie then scored six points during a 14-4 run, and she later made a free throw to give the Mountaineers their largest lead, 62-49, with 3:54 remaining.

Kansas reeled off six straight points, with Knight’s three-pointer pulling the Jayhawks within 63-58 with 1:59 left.

But Kansas ran out of chances. Bussie ripped a rebound from Harper underneath the West Virginia basket, and Holmes eventually made a layup with 1:19 remaining to push the lead to seven.

West Virginia put itself in position for the crown after beating Baylor, 71-69, Sunday to move into a first-place tie.

“To win the Big 12 in the second year is great,” West Virginia coach Mike Carey said. “We struggled, but we played well enough to win.”

Before tipoff, West Virginia honored Bussie, Caldwell and three other seniors playing in their final home game, while highlights of the Baylor win, including Averee Fields’ go-ahead layup with 12 seconds left, were shown on the video board.