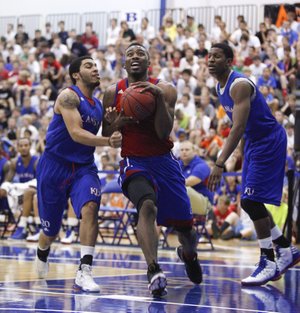 Terms were not disclosed. However, David Pick of Eurobasket.com reports that the 6-foot-4, 215-pound Langford will earn $3.8 million over two seasons.

Langford, 30, averaged 16.7 points a game last year for EA7 Emporio Armani Milan, which won the Italian League title for the first time since 1996. He won the Alfonso Ford trophy as top scorer in the Euroleague and was named All-Euroleague first team.

Eurobasket.com reports Langford recently declined a minimum offer from the Philadelphia 76ers worth $816,482 for the 2014-15 season.

Langford explained his reasoning for heading to Russia on Twitter:

4 . Your value is your worth at all times

Langford, who ranks No. 7 on KU’s all-time scoring list, later added in a Tweet: “We had a special run (with EA7) and I leave bearing no hard feelings...We did what we set out to do fellas.”

Jake Pavorsky of libertyballers.com, which covers the Sixers, writes: “Watching Langford on tape, the lefty has a real sweet jump shot. He can play both the point and shooting guard spots, and showed he’s capable of spotting up and knocking down a trey in catch and shoot situations.

Last season he shot 43.3 percent from the floor, and 36.4 percent from beyond the arc. Considering Philadelphia already has three point guards on the roster (they are expected to keep Michael Carter-Williams, Tony Wroten, and Pierre Jackson), I would anticipate that the Sixers wanted him to play 2-guard.”

Langford according to Euroleague.net ranks 63rd on the all-time Euroleague scorers list with 1,246 points. One of the 62 players ahead of him has a better scoring average (15.6 ppg in 80 Euroleague games). He played two seasons for Khimki Moscow. In 2010-11 he averaged 18.7 ppg. He played one season for Maccabi Electra Tel Aviv, which won the Adriatic League as well as the Israeli League. The 2005 KU graduate also has played for Vanoli Soresina and Virtus Bologna in Italy.

The 6-foot-6 Little, leading scorer for the Tulsa 66ers of the NBA Developmental League last season, was 10-for-10 from the free-throw line. He also hit three of seven floor shots (2-of-5 threes) while playing 18 minutes in a reserve role. He did not score in Saturday’s summer-league-opening loss to Detroit, logging just eight minutes.

Former KU center Tarik Black scored 12 points and had seven rebounds in Houston’s 95-89 loss to Detroit on Sunday. The 6-8, 253-pounder hit five of nine shots and two of two free throws while playing 22 minutes in a reserve role.

The Orlando summer league continues until Thursday. Black also will be playing for the Rockets in the Las Vegas summer league, which starts Thursday and runs until July 21.

Holiday tweets: KU junior forward Jamari Traylor caused quite a stir on Twitter and Internet message boards on the Fourth of July. He tweeted: “Happy Independence Day! To a country built on lies, injustice and hypocrisy. ‘Freedom’ to all.”

He included a picture of a man crying with a flag hung around his neck. Traylor was blasted by many KU fans on message boards for his initial social media comment.

A couple hours after his tweet, Traylor apologized with this tweet: “Please read this if I offended you & I apologize if you misinterpreted my message. ... Don’t get me wrong, I love where I live & there’s no place like it, but there are still injustices going on everyday. I’m sorry if I offended you but everyone has different lives & everyone can’t relate to mine just like I can’t fully relate to yours. I really appreciate the people who fight to protect us. I was just trying to show how things aren’t fully changed & I chose a strong picture to illustrate my thoughts. I just want to spend holidays with my dad who I feel is wrongly & unjustly imprisoned.”

Traylor’s dad, Jessie, is in prison in Indiana, serving a life sentence. According to ESPN the sentence is “for conspiracy to distribute five or more kilograms of cocaine, possession of cocaine with intent to distribute and two counts of using a telephone in furtherance of a drug-trafficking crime.”

Former KU center Joel Embiid tweeted: “Happy 4th of July to my Americans. Have fun today and BE SAFE.” He reported he will wear jersey No. 11 his rookie season with the Philadelphia 76ers. He wore 21 in his one season at KU.

Andrew Wiggins and KU coach Bill Self will be holding a camp for youths grades 1-12 on Aug. 9-10 at Shawnee Mission West. For information go to http://ljw.bz/1j7qr3z