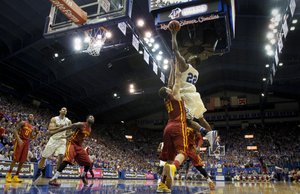 So nice to see all the 'Hawks making there FT's - only 3 misses!

And who cares if Naadir scores at all if he can dish. Isn't that basically what he did in HS with a loaded team, or maybe that was TT.

I was shocked to see how angry Coach Self was at Nadiir early in the game and thst he gave him a really hard swat on the rear end. Did anyone else notice that or did I see it wrong?

I actually had to check the replay because it looked like he flipped him off as well.

On the replay, Self is holding up a hand signal to Naa: 3rd+4th+5th fingers (yes initially it looked like "angry bird", but it wasnt--notice the other 2 fingers. Self is better than that, come on, folks. I dont mind the 'man's game/locker-room language, as many old-ball fire/brimstone coaches do that, but high-school hand gestures is not Bill Self, nor did he do that. He was simply telling Naa "thats 3 plays in a row".). Ive never seen any Div1 coach flip someone off during a game. Ever. Has anyone else??

It definitely looked initially like Self flipped him off and my stomach dropped through the floor when I saw it. "Please tell me he didn't just do that" went through my head. Then they replayed the exchange and you could clearly see the three fingers up. Phew.....

It was just the camera angle and the speed of it, not to mention the flanmes shootinmg out of his nostrils at the time...

Daniel, That is so funny! My wife thought the same thing. She was INSISTENT that he had flipped Tharpe off. He was holding up 3 fingers and telling him that he had screwed up 3 possessions in a row... It did look like he flipped him off tho

That's funny; I had to go back and look at it as well.

Besides not taking care not to lose the ball, his biggest mistake was doing it right in front of Self. Self actually caught the ball when it went OB. The swat on the butt was a firm encouragement to "tigten it up."

Tharpe more than meets Self's idea of a PG, i.e. make the others/team better. To make others and the team better, he's got to take (and hopefull drop) shots, otherwise opponents would clogg the passing lanes, especially into the post.

I'm over the moon about Tharpe's O management of the team. For the first time during last night's game when it got close late in the game, I had total confidence the Hawks would pull it out. The team, led by Tharpe, is playing with alot of composure and confidence.

All is good with Naad. He'll rain those 3s if need be; for those who wonder why he didn't shoot that much of 3s (he's a sharp-shooter).

However.... those over-the-back bounce passes from Naad & Mason; they're too easy to intercept - too weak. I hope they learn not to do that too much.

Great Job, Naadir!! You have really stepped it up, a few brainf#*ts notwithstanding...

FYI, there is photographic proof of a prone ISU player tripping Joel Embiid in the photo gallery. Remember that acrobatic shot where Joel was falling down under the basket?? He had some help, and the refs completely missed it.

Way to show them up Joel!! Rock Chalk, Jayhawks!!

Looks like Dustin Hogue based on the red shoes and red socks. It didn't look intentional at live speed but in the photo looks like he lifted the left leg to hook Embiid's feet.

Photos only show a frozen moment. Odds are the guy was rolling and in motion and the camera just caught it in the middle of that motion. No biggie.

Smart scores more but at a much lower effectiveness level and gets more rebounds but that's about it. I think at this point I think Tharpe is playing as well as could be hoped for offensively. He is really controlling the show and running KU at a high efficiency level. It's amazing that Kansas has the most efficient offense in the conference right now and also the highest turnover percentage. That means when we DON'T turn it over our offensive efficiency numbers are off the charts.