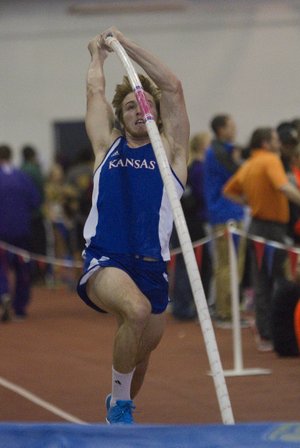 Kansas Pole Vaulter Alex Bishop competes during the Jayhawk Classic on Friday, Jan. 24, 2014, at Anschutz Pavilion. Bishop tied for third as Jayhawks (and one former Jayhawk) took eight of the top 10 finishes.

Never was that more evident than Friday at the Jayhawk Classic, KU’s second indoor home meet of the season at Anschutz Pavilion. Four Jayhawks and one former Jayhawk swept the top five spots in the event, which was won by 2011 graduate Jordan Scott, the lone competitor to clear 17 feet, 4 inches.

For a program that boasts so many former All-Americans and Olympians, Kansas’ possible return to a golden age of pole vaulting is something that has current athletes and coaches glowing with excitement.

“We know we have a pretty stacked team right now,” senior Alex Bishop said. “And the main thing is just coming out and giving it everything. We support each other but we have the competitiveness between each other. And that’s what drives us. That’s kind of the backbone of what we do.”

Of that group, Albright, Bishop, Lupton and Meyer all are currently ranked in the Top 30 nationally.

Junior Casey Bowen, who has national team experience at the junior world championships in 2012, finished second while competing unattached. Bowen is likely to red-shirt the indoor season, but would almost certainly give KU five guys in the Top 30 nationally if he were competing.

“They’re on fire,” said 2010 national champion Scott, a little surprised that he held off the current Jayhawks. “And they’re a threat. It’s unreal. Coach (Tom) Hays has really developed a great crew here, and I’m so glad that we could keep it going and bring back some of the tradition that was here.”

The end of Friday’s event basically came down to the KU athletes duking it out, jump for jump, with each other. Being among the last men jumping is something the group is used to by now. And each one said having the big stage all to the Jayhawks only fuels their competitive fire.

“There are some fun comments like, ‘I’m coming for ya,’ and stuff like that,” Bishop said. “It’s fun, but it’s pretty playful.”

In an event where 18 feet is sort of a Mount Rushmore mark, there is no better coach to tutor such a talented group than Hays. During his career, Hays, a former KU pole vaulter himself, has coached seven athletes who have cleared 18 feet. That mark ties him for most in the nation, and both he and his current crew are gunning to push him over the top.

Hays did not back down from such lofty goals when asked whether they were realistic.

“I don’t think any school’s ever had more than three 18-footers in one year and that’s a goal,” he said. “There is no reason that all eight won’t be (over 17), and half of them need to be thinking about 18 feet.”

That’s not a problem, according to Lupton, who said it’s rare for any of KU’s eight vaulters to leave a meet feeling too good about themselves.

“If you get done with a meet and you’re satisfied, that’s not such a good thing,” he said. “You’ve always gotta be hungry for that next mark.”

Added Bishop: “The hardest thing about our event is you always end on a miss.”

By “miss,” he means that moment when the bar is knocked off of its perch and lands on the mat below. And while that happens at every meet for every KU vaulter, it’s the only time Hays is willing to associate that word with any of his current crew.

“First of all, they try to listen,” the coach said. “I say that because all of them got here because they did it their own way. But they’ve bought into the culture, they believe in it, they’re trying and they still have their own personalities, which is kind of cool.”