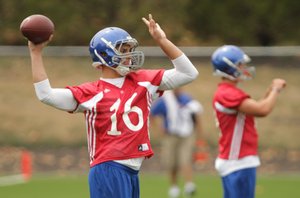 Freshman quarterback Brock Berglund works out with the quarterbacks during the team's first practice on Thursday, Aug. 4, 2011.

Former Kansas University football player Brock Berglund, who became best known for uttering a quote comparing himself to Peyton Manning, Tim Tebow and Michael Vick all rolled into one, is on the move again.

North Texas football coach Dan McCarney on Wednesday confirmed that Berglund was leaving the Mean Green program to pursue playing time at his fourth school since 2011.

After decommitting from Colorado and signing with Kansas in 2011, Berglund, a Denver native, said goodbye to KU for good in January of 2012. His departure from Lawrence followed the firing of KU coach Turner Gill and months of legal trouble for an assault incident back home.

Berglund then tried a stint at Scottsdale Community College, but left the Fighting Artichokes program after just a few weeks because of SCC’s crowded quarterback situation.

He transferred to North Texas in time to sit out the 2012 season in accordance with NCAA transfer rules and was the team’s third-string option throughout 2013, going the entire season without throwing a single pass.

The presence of two players ahead of him on UNT’s depth chart, as well as North Texas’ recent signing of a junior-college quarterback, appeared to influence Berglund’s decision to bolt.

Berglund, a 2011 graduate of Valor Christian High, once was ranked by Rivals.com as the 13th best dual-threat quarterback in the country.

In an interview with the Denton (Texas) Record-Chronicle, McCarney indicated he believed Berglund might be headed to Northern Colorado, in Greeley, Colo., where he would be eligible to play immediately at the FCS level. Former KU standout Charles Gordon is UNC’s secondary coach.

“We wish him well,” McCarney told the Record-Chronicle. “We are glad he was a part of the program and hope that he can reach his goals at his next destination.”

I've always loved that one.

So when someone accuses them of choking, is that a good thing?

You know you're desperate when you're thinking, I can't wait to put on my fighting artichokes uni. Let's go chokes! Let's go Chokes! 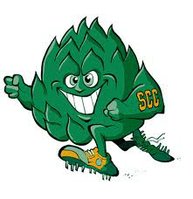 On another note, I feel bad for the kid. He's expecting a great football career, then gets sidetracked by this assault charge and some arrogance on his part. I suspect he's a decent guy. Maybe he should re-think what college is all about, and just be happy to have a scholarship and focus on getting a degree.

Why do I feel like ahperse is sitting in a dark room, poised over his keyboard, just itching to come out of chat room retirement?

I thought the same. If anything will bring him back, it'll be this. Time to unmask!

Kid needs to grow a pair and EARN a job, not just hop around until some school is in such desperate need for help that he's the only option. I don't feel sorry for someone who expects that things just be handed to them. This is nobody's fault but his own and the kid can't just quit in life every time something doesn't go his way. It's called life kid, learn to manage it a little better.

Great take. KU needs to hire a pass-rush with your name and send Benny Goodman and Glen Miller at the QB.

What a shame that sometimes someone's dream becomes a nightmare.

Third string on North Texas and didn't throw a pass all season?? I wish Brock the best but, maybe he should consider the possibility that it just wasn't meant to be.

Another worthless Turner Giles recruits that panned out as loser.

If your life is filled with problems wherever you go, you're probably carrying the problems with you. The kid had talent. I don't know him, but I suspect what he lacked was character. In which case, his future is not bright. His problems will keep following because he is his own worst problem. I wish him well.