Jayhawks’ depth pushes them past Wildcats

Kansas forward Tarik Black rejects a shot from Kansas State guard Jevon Thomas during the second half on Saturday, Jan. 11, 2014 at Allen Fieldhouse. 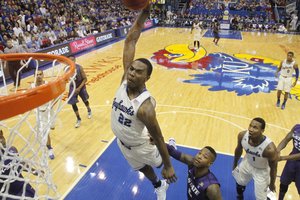 Kansas State basketball coach Bruce Weber said his typical pregame white board in the locker room features the names of seven or eight key players on the opposing team and little tidbits on the tendencies and game plans for each.

Before Saturday’s 86-60 loss at Kansas University, Weber’s white board was nearly full.

“I had a list of 12 players on the board, and they’re all very good players,” Weber said. “They’ve got height, length, athleticism, and (if) you let ’em get going, that happens.”

By that, Weber meant another Allen Fieldhouse beatdown for the visiting Wildcats. Saturday’s setback was just No. 2 for Weber, the second-year head coach of the Wildcats (12-4 overall, 2-1 Big 12), but it resembled so many others that came before it in terms of both the product on the floor and in the stands.

The Jayhawks (11-4, 2-0) methodically built a small lead midway through the first half by knocking down outside shots and playing with great efficiency on offense. Then the hammer came, and KU turned a 20-14 lead into a 33-18 lead late in the first half.

“I thought we started OK, and that’s always your worry here,” Weber said. “It was more that second group, they just kind of picked us apart and made shots and got the margin and got rolling. We didn’t have any answers.”

That second group included post players Jamari Traylor (six points, three rebounds in 16 minutes) and Tarik Black (four points, four rebounds in 15 minutes), guys who would be starting for a lot of teams in the country. Weber did not divulge whether those two were on the white board before the game, but simple math indicates they likely were.

Didn’t matter. With them paving the way inside, that opened things up on the perimeter, where Wayne Selden, Andrew Wiggins and the rest of the Jayhawks combined to shoot 8-for-18 from three-point range and 56 percent from the floor for the game.

“(If) you try to take something away, you gotta give them something,” Weber said. “And they made shots. ... You gotta have a game plan and go with it. And they were better than our game plan today.”

K-State junior Thomas Gipson, who played his third career game inside Allen Fieldhouse and finished with 10 points and four rebounds in 33 minutes, said he thought the big stage might have gotten under the skin of his young teammates, especially during that first-half run that put the game out of reach.

“We couldn’t get a stop, we let the crowd get to us and we just froze,” Gipson said.

Added junior Nino Williams, who led the Wildcats with a dozen points: “They’re really talented. They’re pro prospects. I think early the crowd got us rattled. It was an offensive game, and we’re not really an offensive team. They just made plays, and we didn’t.”

Both teams dive back into Big 12 play quickly with tough games next week. The Jayhawks will travel to Iowa State at 8 p.m. Monday, and the Wildcats will play host to Oklahoma at 6 p.m. Tuesday.

Despite another tough loss to the in-state rival Jayhawks, bouncing back with another tough game — against a different opponent — sounded just fine to Gipson.

“We can’t worry about this loss,” he said. “We have to put it behind us and defend our home court. That’s the good thing about the Big 12. You get back-to-back games so you can’t rely on the last game you play. You always have to play the next game.”

Super excited after watching the Hawks best game of the year. So many superlatives against very few negatives. We played with great athleticism and like a team.

We all have to love the twenty (20) assist on 32 made baskets, Embiid hitting the 17 footer to start the game then showing his stroke with the 3 ball (Hallelujah brother!), Wayne Selden’s new found assertiveness, and Wiggins complete game showing he can finish strong with a dunk can get good rotation on the ball from deep (3-4 on the 3 ball). Holding Foster to 7 points on 3-12 shooting. Wiggins can D. What an amazing talent!!!

Speaking of depth, what’s the deal about AWIII. A 26 point home win with 11 getting PT but no AWIII raises a serous question.

Hawks can put some early pressure on the Big 12 with a win Monday in Ames. The cynic in me says Kane is ok and he’s playing Kansas.

That twisted ankle looked like a real sprain to me, and he sure would have tried to finish the game with his team losing. Even if he plays Monday, it won't be at his usual level, and that makes a big difference for our defense.

With ISU's preference for a fast pace, our patience on offense will be a big factor, as well as enough stops to cut into their confidence. A double-digit lead by halftime might just deflate them completely, but they haven't been a one-man team so far, so a close game should be expected.

The first game without a star player can go either way, and even before Hoiberg ISU has never been "soft" – physically or psychologically. Look for it to be close and hard fought.

I would be very surprised if Kane is available Monday night against KU. Keep in mind that they have to travel from Oklahoma back to Ames probably late tonight. That means he's either flying (dealing with altitude and a swelling foot not good) or sitting on a bus (good luck keep that foot up for that long. If the game was Wednesday I might think he would be there but I doubt it for Monday with having to travel.

The twisted situation reminds me of Hinrich in the tourney. He destroyed his ankle in a Th/Fr game but somehow came back and was effective in the Sat/Sun game.

Does anyone remember what year that happened?

I've been wondering the same thing about White. I think he's a good ball player, and today would have been a great time to see some more of him. The last I heard, he had a bum hip--is that still the deal? In fact, today seemed to be a great game to get everybody in there--Lucas, Greene, White, Frankamp. With about 5 minutes left and the lead at 24, I wanted Coach to bring in the third wave and let them compete.

You guys are reading my mind. I didn't see the game, but when I checked the box score, no AW3 was the first thing that jumped out at me, especially in such a lopsided win. Does anyone know what's going on with him? Did he take Greene's place in the doghouse?

Both Greene and White played very little. My guess is if this was any other team, a non-con game, or even after a more comfortable non-con, they both would have seen more PT. Coach knows he needs to give the team in general and his talented wings in particular, some confidence.

I also got a bit of feeling that Coach had a bit of Snyder mentality - not wanting to just win against the in-state team, but wanting to utterly dominate them (and Bruce).

Greene and White will see more minutes in the future.

Everyone else of significance is already at least 1 game back. Road #2 will be huge. And the tough loss you're referring to was Saturday's game, not the Elijah game right? They were bound to be amped either way. One more lesson for the new guys.

I don't think that you can even begin to lock anything down until you've at least played every team in the league. Last year we lost to TCU and we lost a home game against OSU. We take home court for granted. No game is a lock. We've seen this team go cold, but we've ridden hot shooting to two straight wins. Bill Self will prech to his team to never get over-confident, and I think that the 4 losses will go a long way to driving that point home. We're not winning the league right now, we're just in the lead.

We all knew this was a match up that favored KU pretty heavily. They were outclassed everywhere on the floor by better athletes playing better basketball. Outside of Tharpe not finding his shot everyone looked great.

Nice team win. We continue to build off the OK game. Could not ask much more in prep for ISU; playing better, rebounding better, shooting better, nice confidence, defense improving and a road win under our belts. Even one of their top players hurt with a short turn around. Going to still be tough but will not be as tough as it looked 2 weeks ago now.

Joel - just emotions, not sure why, must have been building all game long. He felt worse that anyone else from the look on his face. Lesson learned I hope.

Tharpe's shot selection is going to hurt us in some game if he cannot reel himself in when his shot is not falling and others are. It took till his almost 6th 3 try before he pulled it back and found a cutter for an easy 2. An assist from him is as good as 3 for me at this point.

Yeah the OK game was a tough road victory but it won't be anything like Hilton. 5 Keys to Victory in one of the toughest venues in college basketball: 1: Keep the turnovers down, just like the kstate game. 2:Defend their 3 point shooters. I dont know very much about iowa state this year but I do know most of them can probably shoot. 3: Ellis will need to continue his consistent play. I know Iowa state does not have very much size to hopefully he will have a great game in the paint 4: Somebody will need to step up and lead the way offensively. It seems like time we win a tough road game, somebody has a big game. From what I have seen so far this season, it really could be anybody. 5: Good point guard play. Tharpe will need to be a floor general in this game, and Mason could step up and play a huge role against the cyclones. Would also be nice to see frankamp get some minutes

Perry & Jo could stand to watch some tape of Tarik & Jamri. They were fantastic against the double both giving and receiving. So nice to watch.

In spite of Tarik's foul total again, gotta love that he drew not 1 but 2 charging calls. That may be a best in nation performance this year. No one is drawing charges this year, and he got 2. There are teams that don't have that many. for the year.

Also loved Evan greeting Wiggs as he came off the floor following "the dunk". Obviously, and fittingly, low key - to the extent that it just busted him up.

real nice to see wayne have another really good game, I know it has to help his confidence greatly, to this point anyways the tough non conference schedule looks really good, its the type of games like those which help prepare you for the regular conference and again nobody can compare to the non conference we played, bilas was say that the non conference was crazy. good to see wayne be ALOT more aggressive in these conference games, wiggins had a good complete ball game gonna be really really tough tomorrow night. so this one is behind us now and its on to the next challenge, lets hope we just continue to improve GO HAWKS